The Economics of Writing Online

How people make money writing on the internet.

Hello friends, and welcome to Young Money! If you want to join 4820 (closing in on 5k 👀) other readers learning about finances and career navigation, subscribe below: 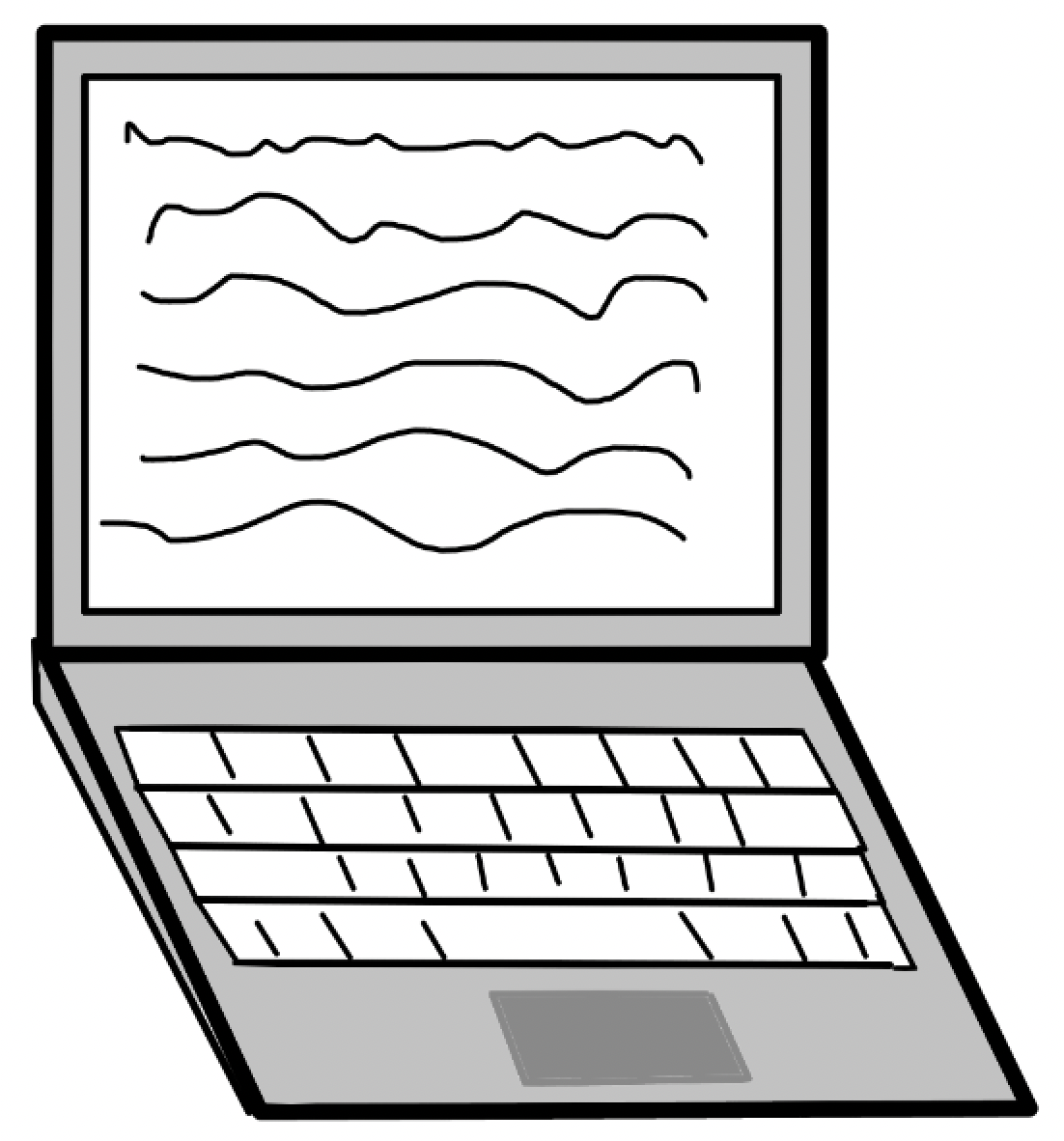 As an advocate for radical transparency, I want you all to know what's going on with Young Money now. A few updates:

If you signed up for Young Money in the last week or so, you probably noticed an "audience survey" attached to the welcome email. My following has grown from 200 friends, family members, and acquaintances to 5,000 readers from around the world, and I want to know what the Young Money reader base looks like now.

I created a brief, fully anonymous, eight question survey to help me better understand who you guys are.  My goal is to better understand my readers, continue writing content relevant to you all, and partner with sponsors that you will actually care about. If you can take 42 seconds to fill out the survey below, I would really appreciate it.

Young Money Audience Info
Note: these answers are entirely anonymous. My goal is to generate a broad picture of the Young Money audience in order to write more engaging content and partner with sponsors ...
docs.google.com

Now about the sponsor thing. It turns out that companies will pay writers to include a sponsored image and brief statement at the beginning/end of their posts.

How cool is that?

My first sponsor is a certain multi-billion dollar company that is rewriting the investing handbook across several asset classes. You will see who they are soon enough; hopefully you find them as interesting as I do.

Yes, I do want sponsors to pay me to advertise on my blog. Getting paid to produce content is every writer's dream. However, I want to assure you guys of one thing: I will not partner with a sponsor unless I would personally invest in the company or use its products and services. You won't catch me shilling an NFT project or promoting some new cryptocurrency.

I have turned down a few sponsors (including an NFT project, lmao) that reached out because they just didn't make sense for what I'm building here. My brand and my connection with you guys is my most valuable asset, and I won't jeopardize that for quick cash.

That being said, good sponsors are a huge asset, because they allow me to invest even more time into this blog without having to worry about the next paycheck.

The key to finding the right sponsors is knowing my audience, so please fill out this form (the same one linked above), if you have a minute. I will plug the form on Thursday's piece as well, so anyone who misses today's can catch it later this week.

Thanks, you guys rock 🤝

On to the actual article.

The Economics of Online Writing

Until a few months ago, I had no idea how the money side of online writing worked. While my finance curriculum taught me how to solve for weighted-average cost of capital, and career services at Mercer University helped me curate my resume, the process of turning key strokes into cash flow was a mystery.

Then last week it hit me: If I had no idea how people monetized this stuff, it's likely that most of my readers don't know how it works either.

So now that I'm operating in the weeds of the online economy, I thought it would be interesting to write about how this process works.

If you want to write online, or if you're just curious about the "business" of blogging, you've come to the right place.

At the core, there are three ways to make money creating content online:

The most straightforward of all three. Readers pay $____ per week, month, year, whatever to have access to your content. Publications of all sizes, from billion dollar empires like Bloomberg to newsletters written by individuals, utilize paid subscriptions.

Paid subscriptions are fantastic for writers: revenue is easily trackable, and the writer doesn't have to spend time finding sponsors and building partnerships. Just create content and let your audience pay for it. Paid subscriptions create a recurring revenue stream that reduces risk for the writer.

The catch is that most readers don't want to pay for content. Outside of a student discount for the Wall Street Journal a few years ago, I don't think I have ever paid for online written content. This presents a dilemma for writers: you are sacrificing audience size in exchange for recurring revenue.

So how do you get readers to pay for your content?

Provide great value that is difficult to find anywhere else. Niche content is king. Edwin Dorsey, another writer around my age, has done a fantastic job of this with his newsletter: The Bear Cave.

These premium reports are valuable for investors, and hundreds of readers pay him $40 a month for access to his reports. The result? As of last June, he was making ~ $300k ARR from premium subscriptions alone.

After one year of a free newsletter, and now six months into paid, this thing is for real:

For anyone thinking about launching a newsletter, some early learnings in the thread below👇

It's difficult to scale a premium newsletter, because paywalled content circulates poorly. Edwin's free content is the marketing arm that expands his audience, and a portion of new free subscribers convert to paid subscribers over time.

Free content is a fantastic funnel for your more exclusive pieces, and it doesn't take that many paid subscribers to make a solid living. If you charge $10 per month, just 1,000 readers will net you $120k in revenue per year. Not bad, eh?

A few months ago, a friend of mine who writes the Alpha Letter, a newsletter that covers microcap stocks and broader market commentary, reached out to me and asked if I would like to write a guest post on his site.

I said, "Sure," and sent him a new piece to publish the following week. It was well received by his audience, and I now write a guest post each week. These guest posts have greatly benefited me for a few reasons:

This agreement benefits the Alpha Letter too: he receives more content to include in his newsletter without needing to write new pieces.

After seeing how well my partnership with the Alpha Letter has worked, I began exploring other similar opportunities. I have now guest-posted at least once on four different newsletters since January.

In the survey linked at the top of this week's piece, the first question I ask is "How did you find Young Money?" The results confirm my prior suspicions: cross-posts work well. Almost half of the first 37 responses said they found my work on 3rd party websites and newsletters. 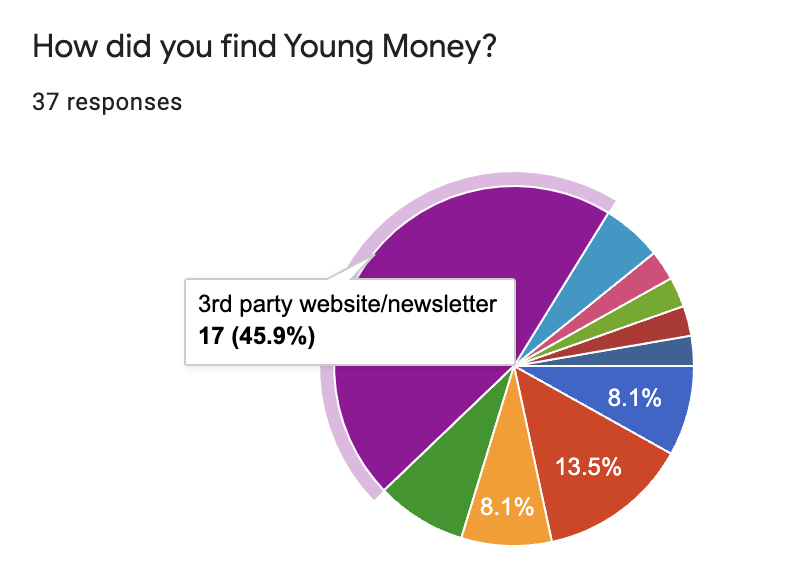 Some of these instances were planned guest posts, while others were simply individuals sharing pieces that they enjoyed on their sites. The point still stands: cross-posting is a phenomenal channel for growing your audience.

Internet advertisements are basically as old as the internet itself. In 1994, AT&T posted the first ever banner ad on HotWired.com. You're looking at a piece of history right here:

This first banner ad had an astounding 44% click rate. The internet moves fast, and banner ads today have an abysmal 0.05% click rate.

Marketers understand that consumers hate these ads, and the advertisement space is constantly changing. Instead of ineffective and spammy banner/pop-up ads, brands now look to partner with and sponsor popular content. Morning Brew, which sold to Business Insider for $75M in 2020, is a masterclass example of this.

Packy McCormick's Not Boring and Litquidity's Exec Sum are two younger blogs/newsletters that have taken advantage of the ad sponsor monetization channel as well.

While the content is different, the monetization mechanisms are similar. Both publications have sponsors that pay to advertise on their posts. Check out two examples of these sponsored ads below: 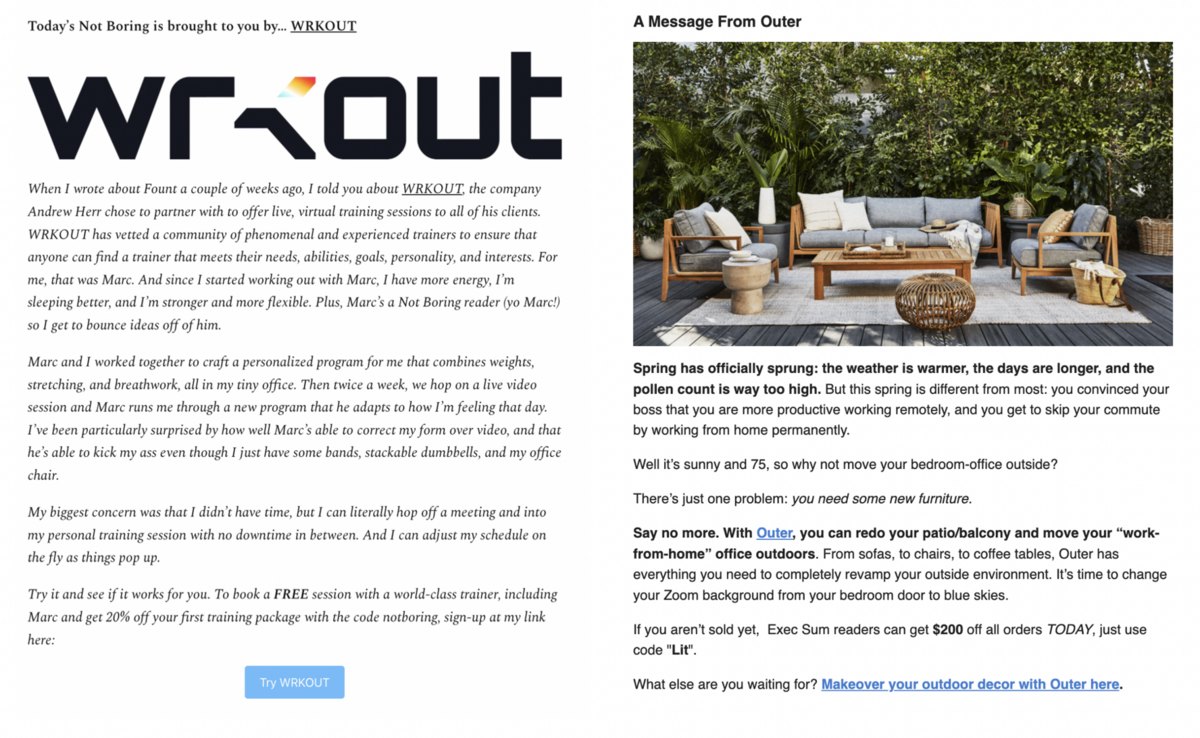 Unlike spammy pop-ups that are difficult to avoid, these sponsored ads are placed at the beginning of articles, not interrupting the reader's flow later.

Email newsletter partnerships are growing more and more important to marketing teams, thanks to Apple's recent iOS 14.5. Users now have to opt-in to let social media channels like Facebook see their data. This shift, while harmless for users, has thrown a massive wrench in the Facebook ad machine.

Email ad campaigns already outperformed social media campaigns, because users are typically more engaged to their inboxes than their timelines. This disparity is only growing with Apple's recent update.

I will be incorporating similar sponsored ads on Young Money starting in the next week or so. Don't be surprised to see a "Together with ______" at the top of a post soon.

You can actually take this sponsored thing a step further, too. Instead of companies paying to place an ad on the newsletter, the newsletter can be the ad.

Companies that want increased exposure will sometimes pay for creators to write detailed pieces about their businesses. Packy has perfected this process, typically writing one sponsored "deep dive" article per week. Mario Gabrielle's The Generalist and Litquidity's Exec Sum have incorporated this model as well.

These deep dives, which are quite lucrative for the writer, increase brand awareness and create a great reference point for the sponsor, while providing the audiences with interesting reads about up-and-coming companies. A big newsletter can charge $50k+ for this type of work.

You don't have to work for a Bloomberg or Forbes to make money writing online. You do have to consistently produce quality content though. The decision to go with premium subscriptions, ads, or some mix stems from your target audience and area of content. You write the only major newsletter covering lacrosse in the United States? You can probably paywall that bad boy. You write a blog about money named after Lil Wayne's entertainment company? You probably need to stick with sponsorships.

Hopefully this gave you guys a better understanding of what's going on on the other side of this laptop screen. I'll catch y'all Thursday.