What a Time to Be Alive

Statistically speaking, the world has never been better.

Hello friends, and welcome to Young Money! If you want to join 9725 other readers learning about finances and career navigation, subscribe below:

Today's Young Money is brought to you by Rows!

As I mentioned last week, I recently replaced Google Sheets with Rows as my go-to spreadsheet. The reason is that Rows allows live integration with third-party online datasets such as OurWorldInData, so my spreadsheets update in real-time as the data changes. I can finally link my work directly to websites instead of copying back and forth to Excel 27 times.

Rows also integrates with dozens of applications, including social media sites like Twitter and Instagram and business-management platforms like Salesforce and Stripe, so you can track your followers and your finances in real-time from a spreadsheet.

I actually used Rows for a couple of my charts today, as you'll see below.

Elevate your spreadsheet game, and join me on Rows  🤝 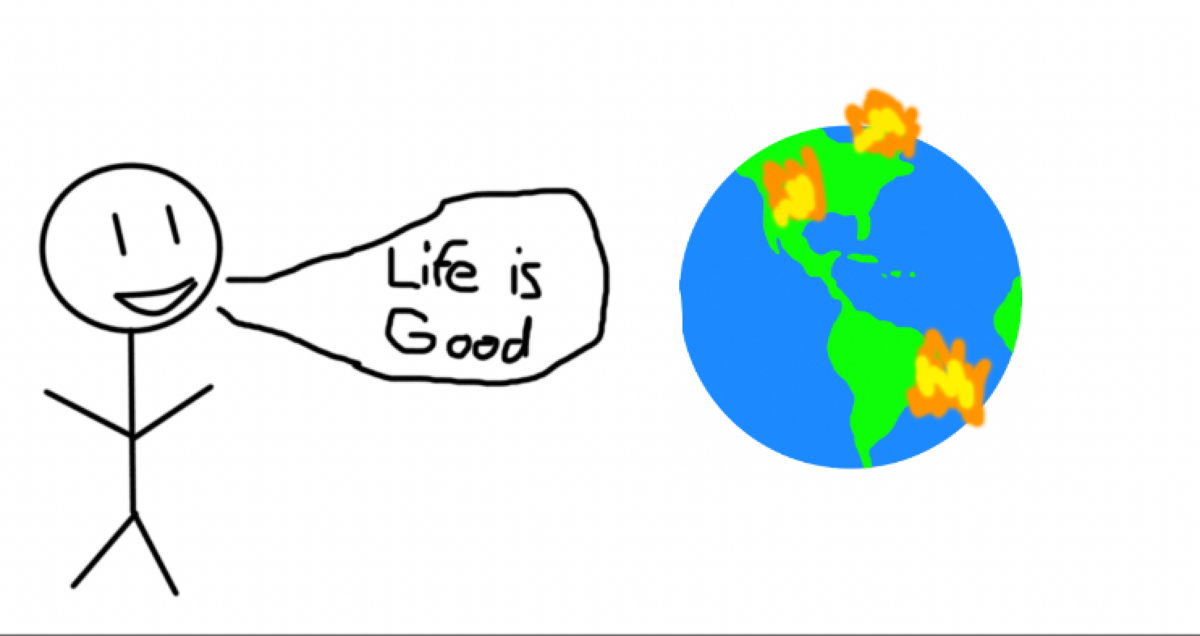 A few things going on in the world today:

And we are only two years into this century's "Roaring 20s." There is so much chaos in the world today that it's easy to say "life sucks, the world sucks, and everything sucks."

Today, I am asking you to consider a different, more optimistic take: Life is good. In fact, it isn't just good. Life is the best that it has ever been.

Turn Back the Clock

If we were living in Alexandria in year 0, Kyoto during the samurai era, Stockholm in 1655, or Paris during Napoleon's reign, each of us would have had a coin flip's chance of surviving adolescence. Maybe we wouldn't have survived our own births. Maybe we would have fallen victim to famine, sickness, war, infection, labor, or an abundance of other adverse conditions.

From 500 BC to 1900 AD, death reigned supreme. The world's average youth mortality rate, defined as death before age 15, was 46.7%. Additionally, one-quarter of all infants didn't reach their first birthdays.

For 2400 years, your odds of reaching your 15th birthday were reduced to the spin of a roulette wheel. But over the last century, everything changed.

In 2022, the death of a child is a tragic occurrence. In 1822, it was a normal part of daily life. We can't comprehend a world where early deaths were so common, yet that was the real world for millennia.

Static mortality rates for centuries, then a 90% decline in just a few generations. Insane progress. 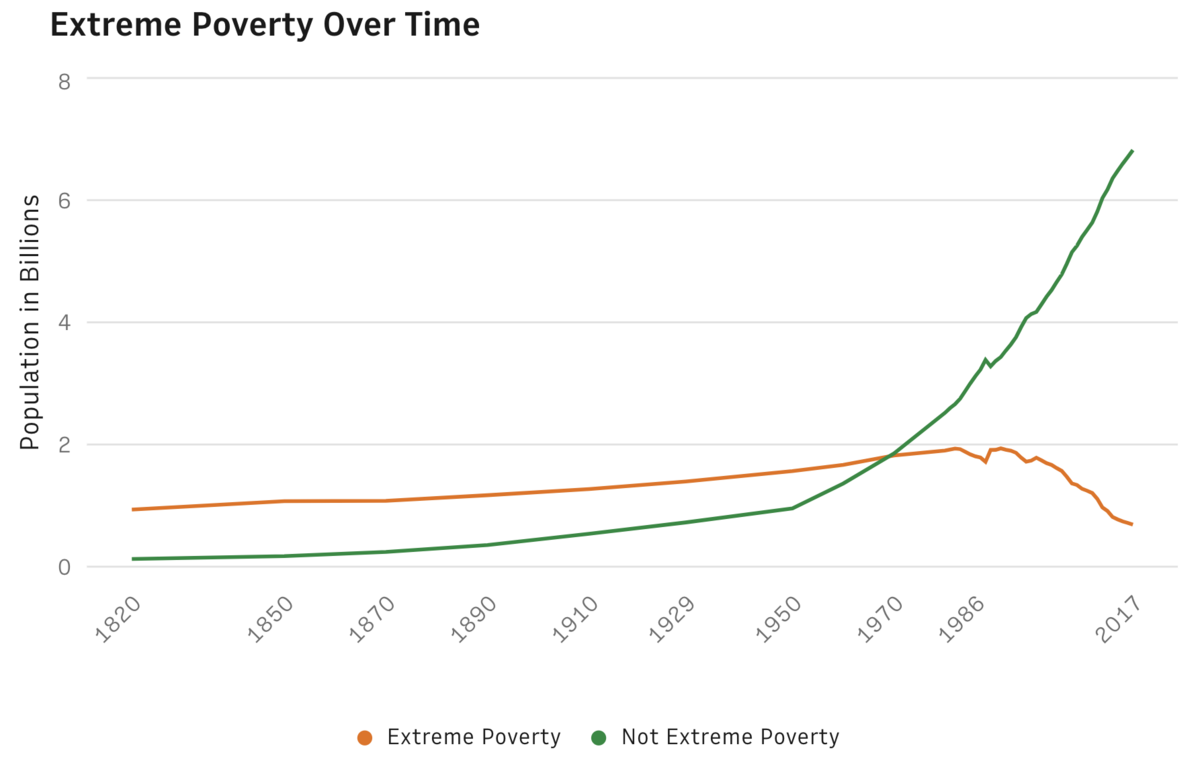 We often focus on wealth inequality in the US. And it's true, the wealth gap is growing. But what gets missed in this wealth gap comparison is just how much better off poor people are now than at any point in the past.

You can be "poor" in the United States today and have a cellphone, an internet connection, food, and shelter. Those living in government housing today have a higher standard of living than the upper class did in year 1900. JD Rockefeller, the richest man in modern history, didn't even have air conditioning.

Even centuries after the advent of the printing press, books were still reserved for the elites. Written knowledge passed down from generation to generation could only be accessed by a select few, with the rest of the populace relying on word-of-mouth communication. Letters couldn't be written. Notes couldn't be taken. Information couldn't be recorded, unless you were born into the right house.

In year 2016, an astounding 86% of the world's population was literate. 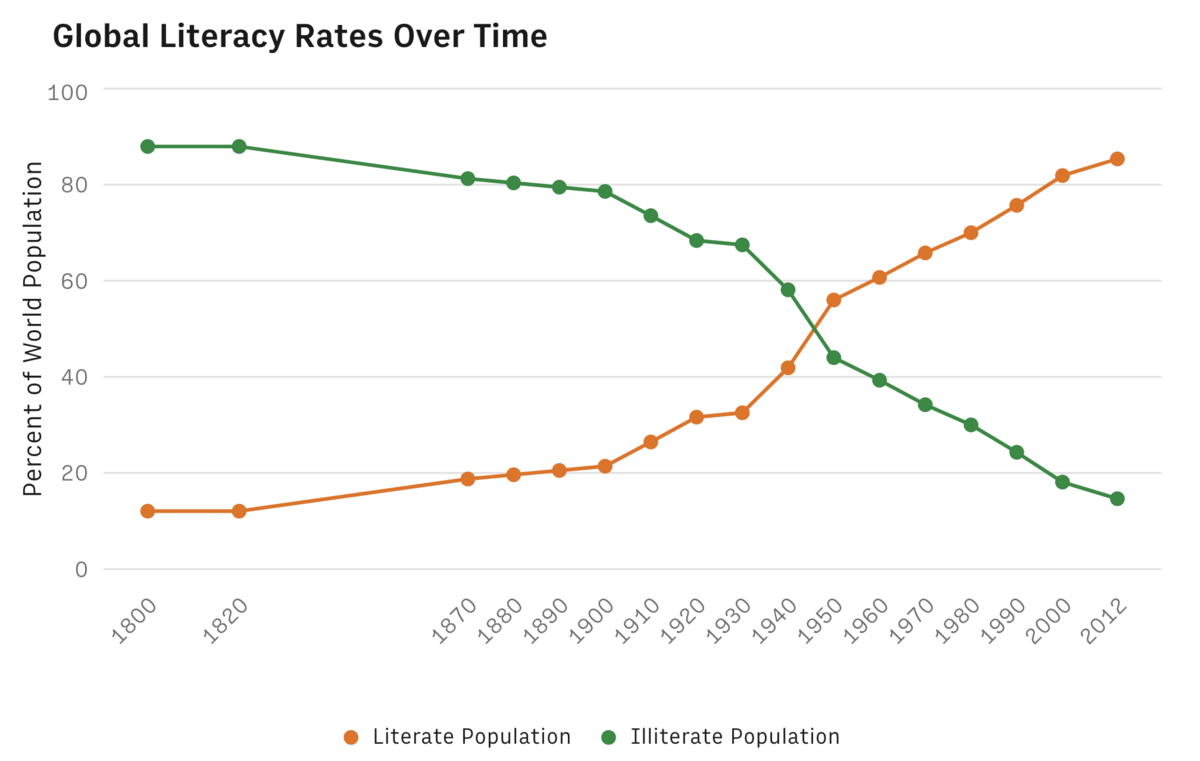 If you were born in Paris, France in 1820, you had a 56% chance of making it to your 15th birthday. Assuming you survived, there was a 38% chance that you knew how to read and write. And even if you were alive and literate, (a combination with just a 21% chance of happening), you had a 50/50 shot of being in extreme poverty.

But let's say that you beat the odds. You were a living, literate Parisian with a modest income. Welcome to the good life.

The reward for overcoming all of life's obstacles was two generations of war that tore your country apart.

But at least gas wasn't $7 per gallon.

It's hard to internalize just how good we have it because our own life experiences are our homeostasis, our base point for comparison. We read about the hardships of history, but we don't experience them. We don't feel them. How could we? Decades of war, sickness, and hardship have been reduced to paragraphs and documentaries.

But those wars, sicknesses, and hardships were all-too-real for those who lived through them.

The Plague of Justinian wiped out 40% of Constantinople's population in four months. The Russian Plague killed 33% of Moscow's population in a single season, and 75% of the remaining populace fled.

The Covid-19 pandemic has been bad, no doubt. But can you imagine a world with 4M New York City deaths in just four months? Where millions of others flee, fearing for their lives?

Because that happened. And it happened more than once.

These accounts feel like faraway stories from an era in the distant past. Lost somewhere between fact and fantasy. But they were just as real to the past generations as our conflicts are to us today.

History is nothing if not a series of mankind conquering nature's limitations.

The printing press allowed our knowledge to conquer death.

Airplanes allowed us to conquer gravity and distant travel.

Computers allowed us to conquer the spatial limitations of data storage.

Over time, these little miracles, these little breakthroughs, they compounded. Each generation built from the shoulders of their predecessors, beginning life on third base thanks to a triple hit by the generation before.

And innovation has accelerated as a result.

Every single thing that we take for granted today would be nothing short of a miracle to anyone who lived just 100 years ago.

Supermarkets with fresh selections of every food imaginable are magic. Planes that will transport you anywhere in the world in under a day are magic. Clean water is magic. Antibiotics are magic. Cell phones are magic. Plumbing systems are magic. Anesthesia is magic. The fact that you can read this blog from New York, to New Delhi, to New Zealand is magic.

But to us, none of this is magic. To us, the real magic is that our ancestors survived with so much less.

But we live in a world where you can Facetime your best friend from another country, and they can fly to visit you the next day. You can instantly communicate with anyone who has an internet connection. The poorest people in first-world countries still have food, water, shelter, and access to healthcare, while 200 years ago a large gash on your leg was a death sentence.

We struggle with purpose, our ancestors struggled with survival.

Asking "What do I want to do with my life?" is a privilege, considering the primary concern for everyone before us was "How do I stay alive?"

So while we tweet, text, and opine about the disastrous state of the world today, it is important to remember that the depths of our modern hells would be the pinnacles of our ancestors' lives. Our problems are a privilege.