Being Right for the Wrong Reasons

The psychology of accidentally getting rich.

Hello friends, and welcome to Young Money! If you want to join 3550 other readers learning about finances and career navigation, subscribe below: 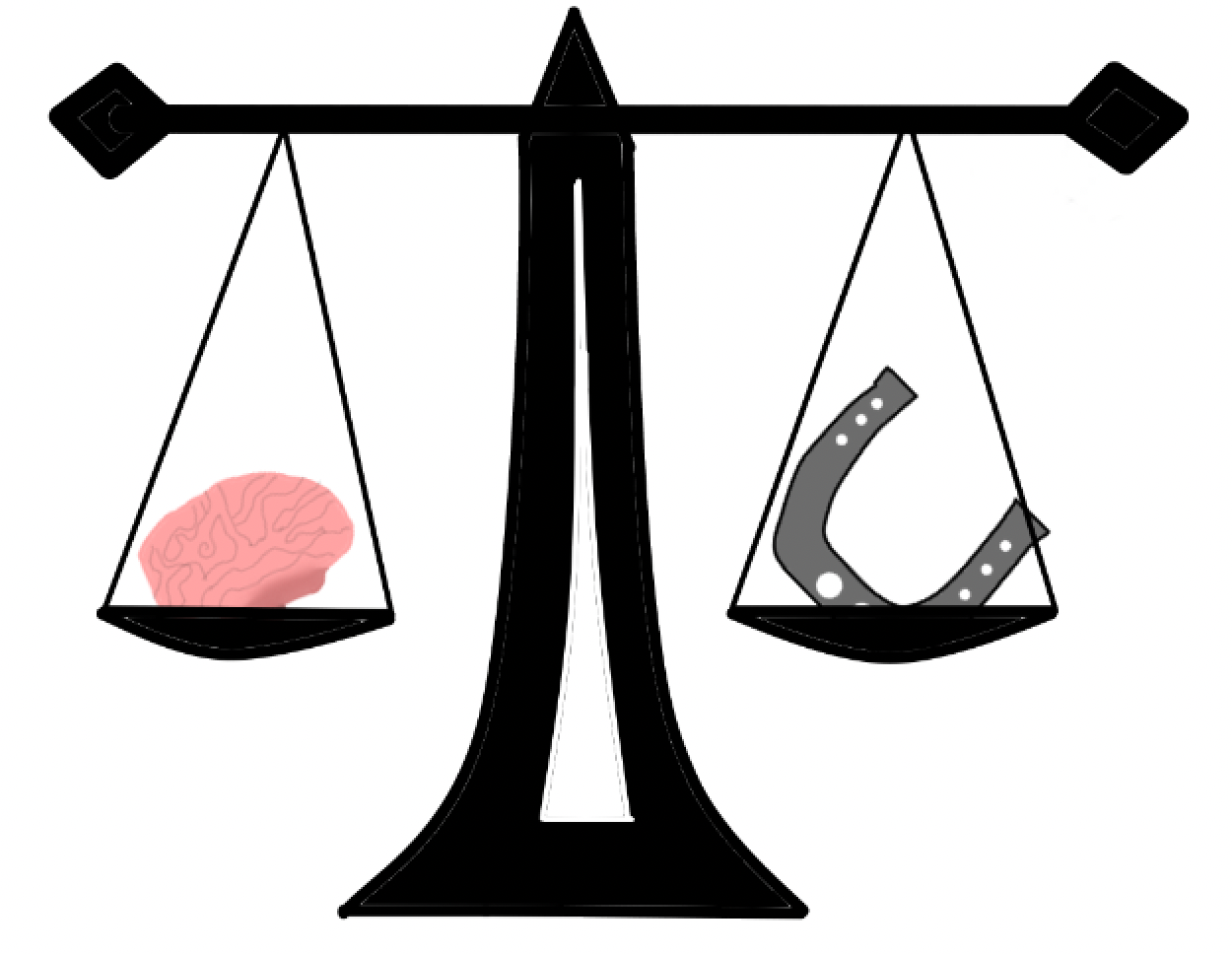 I walked in a casino for the first time in March 2017. I was a 19 year-old college sophomore, and I had booked a Bahamas cruise with my friends for spring break. Hundreds of college kids on a floating hotel in the Atlantic Ocean for a week. Life was good.

In the United States, you have to be 21 to gamble in a casino. However, we were in international waters, and our cruise ship had its own casino. Casinos had fascinated me since I first watched The Hangover as a kid, so I was humming with nervous energy when I walked in. Dazzling lights, attractive servers, dozens of games, and thousands of dollars being thrown around like monopoly money. It was awesome.

One game in particular caught my attention: roulette.

It's a simple game: the dealer spins an ivory ball around a wheel. You place your bet(s) on where you think the ball will land. And you can place all sorts of bets.

Exact numbers. Even or odd. Red or black. High or low. And different bets have different payouts. 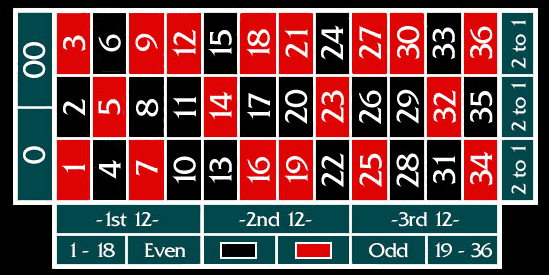 Roulette has a notoriously high house edge, as the payouts are based on 1:36 odds, but there are actually 38 possible outcomes thanks to the 0 and 00. There is no skill involved in roulette. You place chips on numbers, and hope the ball lands in your favor.

Like a cat fascinated by a laser pointer, I couldn't take my eyes off of that damn ball. Merely watching others play got my adrenaline running, and I had to get in on the action. This casino had ten different roulette tables, and each table had a board displaying the results of the last 12 spins.

One of these tables had hit black 11 times in a row. It seems logical that at some point soon, this roulette wheel would mean-revert. In games with an equal probability of binary outcomes, the odds of getting the same result 12 times in a row is ~0.02%.

The conflation of these two points leads to the gambler's fallacy: the incorrect belief that, if a particular event occurs more frequently than normal during the past, it is less likely to happen in the future (or vice versa).

AND IT HIT RED BABY. TALK ABOUT AN ADRENALINE RUSH STRAIGHT TO THE DOME.

My bankroll moved up and down over the next few hours, and I ended the night +$400. Not bad for my first casino trip. Unfortunately, I ignored a timeless gambling mantra: first one's always free.

So my friends and I start discussing roulette "strategy" at breakfast the next day (I hate that I just typed those words) before hitting the casino again that night. With a 100% win rate in a sample size of 4 hours, I was now a roulette expert.

When we returned to the casino that night, I saw another table that looked something like this:

So I bet red. And it hit black again.

"Time to double down!"

"Doubling down one more time!" 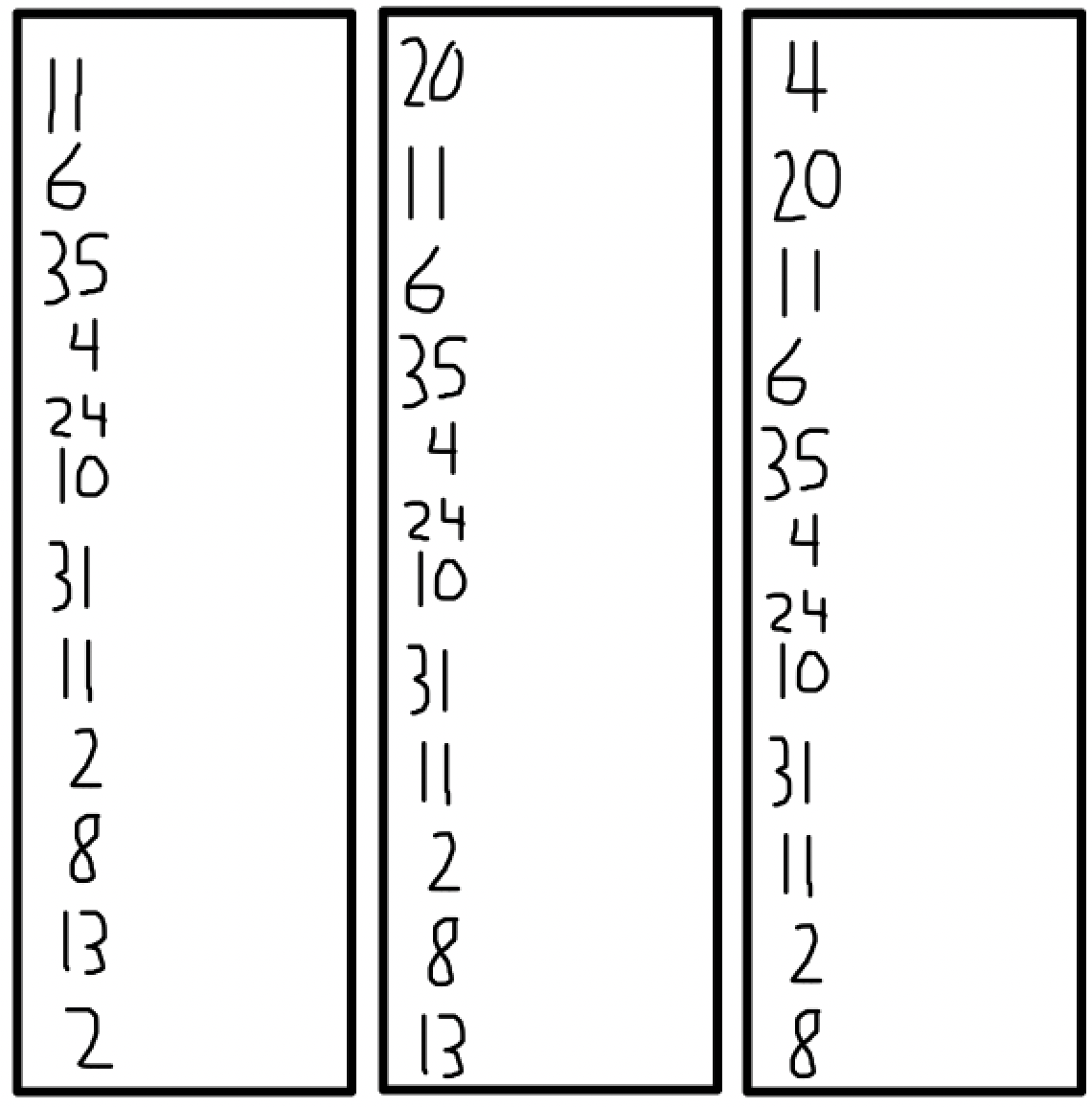 Correlation rarely equals causation. However, we are pretty terrible at realizing this, especially when money is involved. Certainly, my uncanny ability played an outsized role in me making money on night one... right?

Unfortunately, I was right for the wrong reasons.

Morgan Housel has a great quote about this in one of his essays:

Roulette is an obvious example of being right for the wrong reasons. However, the market is full of cases as well.

2020 was a radical time for investors. Fastest crash in history. Fastest recovery in history. Global lockdowns had everyone stuck in their homes, and many took to the markets in their free time. Crypto and growth stocks turned novice investors into millionaires, as a few savvy bets could have rewarded you with generational wealth.

But why were these investors right?

Bitcoin has been the best performing large-cap asset of the last decade, and it's not even close. Life changing returns from the OG cryptocurrency. 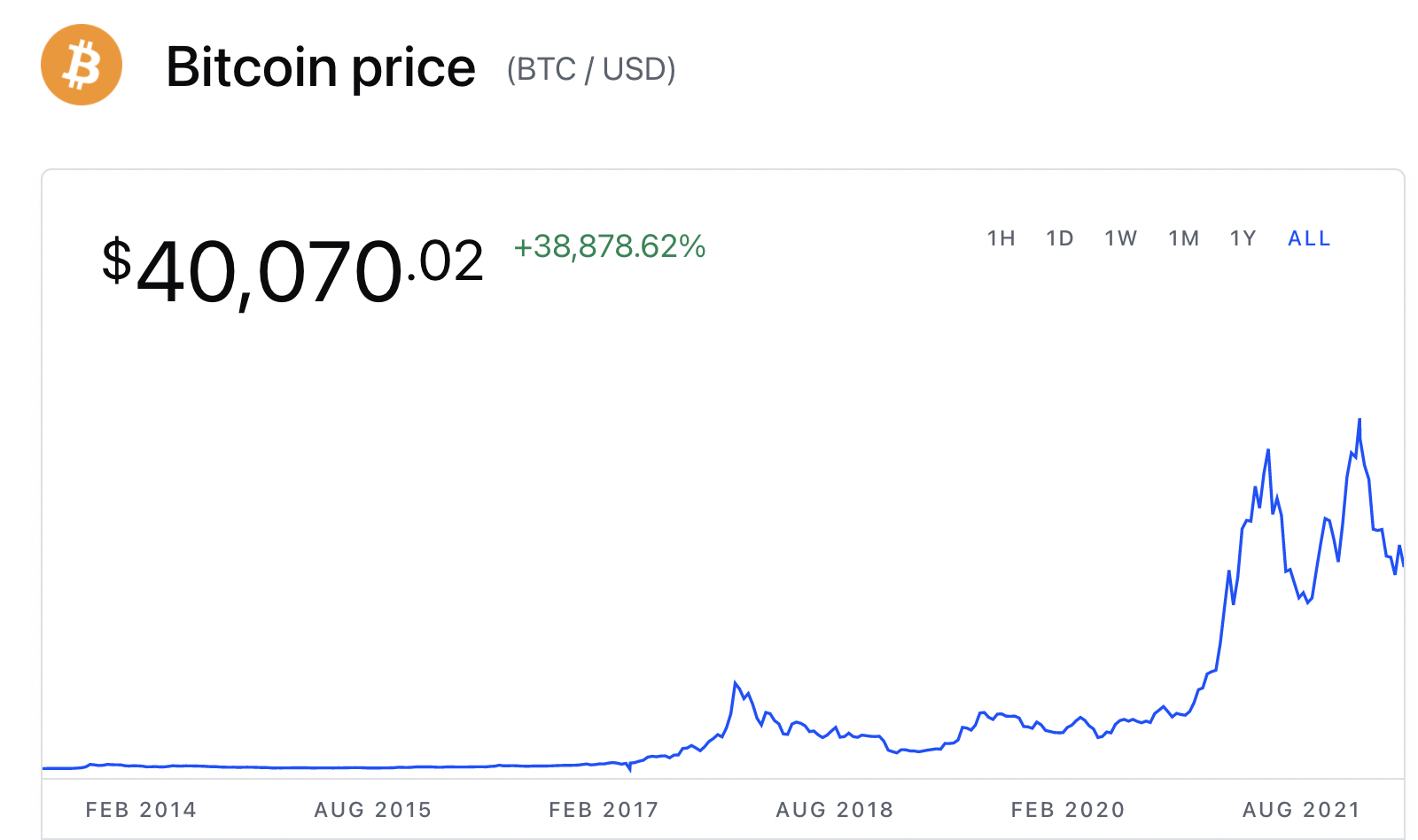 The question is, why did the price go up?

There are a slew of arguments out there.

"Fixed supply in an era of quantitative easing."

"Decentralized currency not tied to any domestic bank."

Yet its returns have shown minimal correlation to inflation. It is still an inefficient form of money, with price volatility making it a hard currency to transaction with. Fixed supply may prevent dilution, but that alone doesn't guarantee that the price should go up. After all, plenty of assets have fixed supply (or even shrinking supply, if a company is buying back more stock than it is issuing).

The "story" of Bitcoin has, so far, been grander than the functionality of it. While the cryptocurrency has shown some usefulness in transferring money across borders, the loudest supporting arguments have fallen flat.

But maybe you invested heavily in 2015 due to the inflation hedge thesis. Or fixed-supply vs. quantitative easing, or any other number of reasons.

And you made 100x returns, life-changing stuff. Time to cash out, quit your job, invest in some stocks and real estate, and drink mojitos on the beach.

After all, you've made so much money that your thesis must be right... right?

But what if you were right for the wrong reasons? What if this "paradigm shift" was nothing more than increasing inflows over time? Is Bitcoin going up because it's an inflation hedge, or because a lot of people think it is? Does fixed supply make Bitcoin more valuable, or do people think it does? The first 10 months of 2021 set a record of annual inflows for the cryptocurrency, and the bull case for Bitcoin has only grown louder as adoption has increased.

What if the real reason for Bitcoin's performance is simply that more and more people buy it every year? What if people are buying it because they think these macro explanations are true? What if the macro explanations are justifications for a price increase, instead of catalysts? What if millions of investors bought Bitcoin because they believed these arguments, even if they weren't actually true?

And if the price movement has been largely predicated on what people think will happen, what happens if the masses change their minds? And what happens to the die-hard believers that were right for the wrong reasons and never sold?

From 2020 to early 2021, growth stocks massively outperformed everything. The fastest market crash in history was followed by the fastest recovery in history, and innovation was king. Cathie Wood was the next Warren Buffett. E-commerce, cloud computing, sports betting, streaming, and electric vehicles stocks were on fire.

Pandemic lockdowns invited millions of bored individuals to the stock market for the first time, and some of these new investors correctly bet heavily on growth.

Their Twitter audiences exploded with their portfolios, and soon every hotshot investor from 2020 had a newsletter, podcast, and 100k social media followers. Valuations didn't matter; 30x sales was cheap for stocks that expected to double their revenues every year. While energy and value stocks were struggling to stay afloat, EVs and tech stocks were gaining 500% in six months.

From March 2020 to Feb 2021, some people made life changing money on growth stocks. They analyzed revenue projections, TAM, and shifts in consumer trends. And all of their forecasts were coming true.

But many of these investors had never seen a full market cycle. They had never experienced flow reversal. And they didn't know when it was prudent to take profits. Feb 2021 to Feb 2022 was the Tale of Two Market Trends. ARKK has crashed, along with covid darlings like Zoom, DraftKings, and Peloton. Many of these stocks will never again see their 2021 highs. Growth investors didn't sell when valuations were approaching nosebleed levels, because everyone knows that you can't time the market.

How do you tell someone that 50x sales is an outrageous valuation, when they got rich by ignoring valuations for the entirely of their investing careers?

What they thought was well-researched alpha was actually a factor bet on growth and tech. When market trends reverse, no amount of research will save a poorly positioned portfolio. But no one who thought it was just a factor bet held til the Feb 2021 highs, and no one who truly believed in their growth stock research ever thought that they should sell.

The poster child for growth investors, the bane of every short-seller's existence. The nuclear performance of Tesla's stock has led some individuals to quit their jobs and retire on their gains.

Today I’m retiring from the corporate world at age 39.

Not selling any shares for the foreseeable future. $TSLA

A bold strategy, sure. But if your all-in Tesla bet made you a multi-millionaire, wouldn't you do the same? Its ascension was obvious. EVs were the future, as a world polluted by fossil fuel vehicles wasn't sustainable. While critics never believed that Tesla could turn the corner, the company is now a profitable, near-trillion dollar enterprise that dominates the EV industry.

In hindsight, it seems obvious that electric vehicles are the future. And Tesla will likely be a dominant player for the next several decades. But why does an EV automaker trade at such a premium to its gas-guzzling competitors? After all, batteries might be better for the environment, but a car is still a car. The only difference between a Tesla and a Ford is the power source propelling the vehicle forward.

This isn't a software vs. hardware argument where the former has exponentially better profit margins. The production costs for EVs and traditional cars are similar.

Tesla is a much healthier company now than it was in 2019. It's profitable, bankruptcy is no longer a threat, and government policies are pro-EV around the world. So Tesla deserves a higher multiple than 3.5 years ago. But a 10x valuation increase? When Ford, General Motors, and Volkswagen trade at ~0.5 price to sales?

What will happen as Ford's Mach-E and other traditional OEM EV models gain market share? Will their valuations explode 10x, or will Tesla's fall more in line with the broader market? What happens when an electric vehicle is just a vehicle?

Tesla's growth has been incredible over the last decade, and Musk deserves credit as the greatest entrepreneur of this generation. But most of the gains in Tesla's stock came from valuation expansion, not company growth.

Yet many investors viewed Tesla as the odds-on bet for EV adoption, and they got paid as a result. What happens if your Tesla bet was right for the wrong reasons, and valuations contract? What happens if you never sold, because $1T is still too cheap for the greatest EV company of all time?

For your sake, I hope Elon Musk can roll another black.