Putting Success on a Pedestal

Time to shift our perspectives a bit.

A quick note: please make sure to check out a brief note about a really important charity at the bottom of today's post. Thanks!

Hello friends, and welcome to Young Money! If you want to join 5,369 other readers learning about finances and career navigation, subscribe below:

Today's article is brought to you by: the Petcash Post

Have Fun Getting Smart About Sports

Business of Athletes. Business of Sports. NIL/Endorsement Deals. Over the last 10 years, investments in professional sports teams have outpaced the S&P 500 by over 10% annually. Several athletes have become billionaires through their investments too: For example, Kevin Durant made a 3,000% return on his Whoop investment. The Petcash Post breaks down the business of athletes/sports in a way that is both fun and educational. Heck, you might even learn of a potential investment (or if you’re really rich, what pro team to buy).

Every week, he publishes three articles relating to the business of athletes, sports, and NIL.

To give you a sample of his work, here is one of my favorite pieces.

Now, to the article 🤝 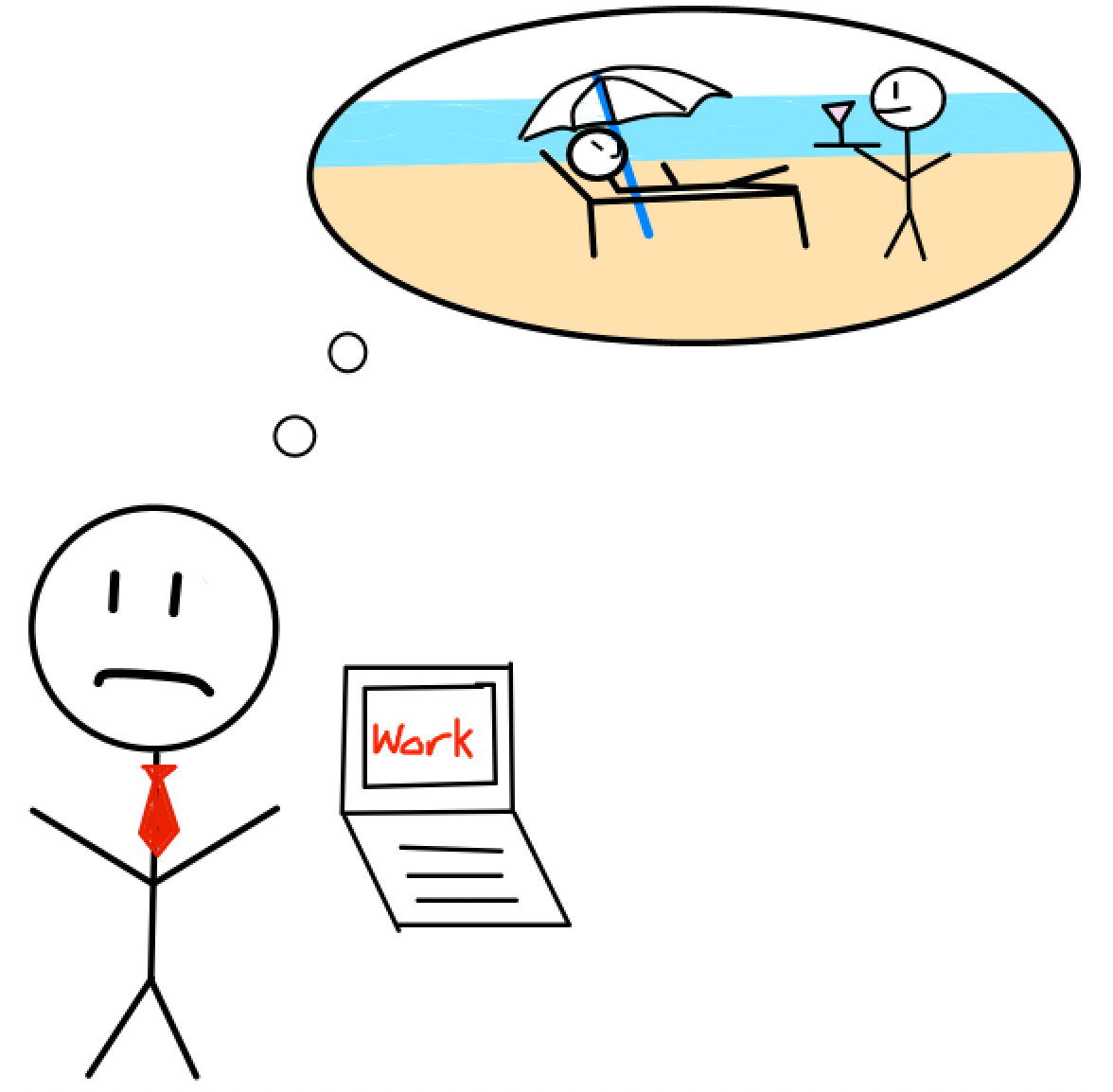 2000 years ago, in his letter to Lucilius regarding travel, Seneca wrote, "Are you surprised, as if it were a novelty, that after such long travel and so many changes of scene you have not been able to shake off the gloom and heaviness of your mind? You need a change of soul rather than a change of climate...

Socrates made the same remark to one who complained; he said: 'Why do you wonder that globe-trotting does not help you, seeing that you always take yourself with you? The reason which set you wandering is ever at your heels.' What pleasure is there in seeing new lands? Or in surveying cities and spots of interest? All your bustle is useless. Do you ask why such flight does not help you? It is because you flee along with yourself."

Seneca was emphasizing to Lucilius that no destination, no foreign place, would ever satisfy his restlessness, because our problems don't reside in places. They reside in our minds. We objectify and romanticize locations and excursions thinking they'll save us. But as soon as the novelty wears off, our problems are there once again, right at our heels.

As someone who has spent the better part of a year traveling everywhere from Norway to Argentina, I can empathize with Lucilius. Unlike Lucilius, I never intended to "escape my problems" in a foreign land. Frankly, I just wanted to go do and see some new stuff.

However, like Lucilius, I did notice that once the freshness of my new surroundings wore off, the issues and problems in my life gradually reappeared.

Seneca was right, you can never run away from yourself.

The Roman statesman's message to his friend applies to far more than just travelers suffocating in wanderlust: it is relevant to anyone perpetually chasing what's "next" in their careers.

The Financial Independence, Retire Early (FIRE) movement is built on the idea of using frugality, extreme savings, and investments to hit escape velocity from the labor force as quickly as possible. Like any good story, FIRE needs a worthy antagonist. It found one in corporate America.

Work sucks, but it takes a certain amount of money to put you in a position where you never have to work again. If you are willing to tolerate this "work" for a certain number of years, and you invest at a much higher rate than your peers, you'll be able to support yourself with investment income alone. You don't have to work anymore; you won the game.

This follows the plot of every movie ever. After 2.5 hours of struggling to prevent a nuclear explosion, save the girl, or find the lost artifact, the protagonist finally succeeds! Everyone rides off into the sunset happily ever after, and the credits roll.

But real life isn't a movie, because we have to keep on living once the credits start rolling.

Just like the traveler who can never seem to escape the demons in their own mind, the early retiree finds themselves facing an existential crisis of sorts: now what? Because retirement was the goal, not a means to a goal, leaving an identity crisis in its wake. When money was the end goal, and you have all of the money that you'll ever need, what do you do?

It's not just the wanna-be-retiree that falls victim to this way of thinking, it's also the perpetual prestige-chaser that thinks the next career level-up will solve their problems. So they pursue the next job, next promotion, next title, with everything they have. But they get there, and the brief wave of satisfaction is fleeting. And the cycle continues.

Fruits of Our Labor

In Man's Search for Meaning, Viktor Frankl said, “When a person can't find a deep sense of meaning, they distract themselves with pleasure.”

And distract ourselves we try.

When the distressed traveler doesn't find himself immediately fulfilled by his journeys, he panics. He tries to go to more exotic places. He yearns to recapture that fleeting novelty of the first excursion, but the harder he tries, the more he fails.

The early retiree succeeded; he hit his goal. But the question of what happens now? keeps growing louder and louder. So he tries to ignore it. To placate it. He drinks mojitos on the beach. Hits the golf course three times a week. Does all of the fun "vacation" things that he never had time to do while he was working. But unlike the movie scene, it doesn't feel like he is riding off into the sunset. It feels like he is filling time with frivolous things.

The prestige-chaser felt a brief burst of satisfaction when he landed a promotion, but it vanished as quickly as it appeared. he tries to recapture the moment through expensive nights out celebrating. High price purchases like new cars, watches, and other material goods. A renewed focus on getting the next promotion. The next job. Because the last promotion brought him a fleeting sense of joy.

The traveler, the retiree, and the worker are all one in the same. They all falsely believe that the solution to their problems comes from escaping their current reality. But we can't escape our realities, because we can't escape ourselves.

The Journey Is the Destination

To quote Dr. Frankl again, "For success, like happiness, cannot be pursued; it must ensue, and it only does so as the unintended side-effect of one's personal dedication to a cause greater than oneself or as the by-product of one's surrender to a person other than oneself. Happiness must happen, and the same holds for success: you have to let it happen by not caring about it."

You can't pursue success, because it isn't a destination. It's an ongoing state of being.

Success isn't an endpoint that you reach by hitting some arbitrary net worth, retiring after an illustrious career, or landing the perfect job. Success is a derivative of the ongoing actions that fill your daily life.

Success isn't a destination. It's an action. A state of being.

The biggest problem with misplacing success isn't that the feeling of achievement is fleeting. It's that it makes you discount all of the little events in your life every single day.

When you spend your life perpetually chasing that next high, whether it be a new country, new job, or early retirement, 99% of your time is spent in the "chase", and 1% is spent hitting those goals. But the satisfaction from those goals never lasts, and the cycle repeats.

The goal isn't to escape your reality, because you'll never succeed. The goal is to construct a reality that you don't need to escape from.

Before we go, I want to tell you a little bit about Knox Martin.

As a college student at the University of Georgia, Knox was diagnosed with glioblastoma, an aggressive form of brain cancer. For a GBM diagnosis, the mean survival is only eight months. However, Knox didn't pay any attention to "mean survival" stats. He bravely fought the disease for three years, before the 24 year old passed away in December 2020.

I never knew Knox. However, over the last two years I have become good friends with Knox's best friends from college. I know from them that he was a one-of-a-kind guy who blessed the lives of everyone that knew him.

GBM is a severely underfunded and under researched disease. The Knox Martin Foundation hopes to change that. The Foundation has partnered with the Tisch Brain Tumor Center at Duke University to fund life-saving research.

With 2022's Night for Knox charity event being held this weekend, I'm hoping to raise awareness for their charity. Supporting my blog is great, but supporting this charity could save someone's life. If you feel inclined, I ask that you join me in donating to help fight this disease by clicking here.