Our "once in a lifetime" experiences are more common than we think.

Hello friends, and welcome to Young Money! If you want to join 3655 other readers learning about finances and career navigation, subscribe below:

I graduated from Mercer University in December 2019 and joined the workforce in February 2020. The first two years of my "professional life" were overshadowed by a global pandemic that brought the world to a screeching halt. Just as we appeared to be on the verge of normalcy, Russia invaded Ukraine on a "peacekeeping" mission that has been anything but peaceful. An invasion of this size hasn't been seen in Europe since WWII, and fear of a possible WWIII grows as this conflict continues.

The overhangs of pandemic and war have caused many, especially people my age, to think, “I’m sick of these unprecedented times”, and “Why are these historic events happening now?"

It certainly feels like the universe is conspiring to disrupt our lives by any means possible. The thing is, history shows that these events are quite precedented.

In 539 AD, Justinian was determined to return the Roman Empire to its former glory. The western half of the Roman Empire had fallen to Germanic tribes a century earlier, but Justinian's Eastern Roman Empire, now based in Constantinople, managed to retake both the Italian Peninsula and North African city of Carthage.

All signs pointed to a united Roman Empire once again ruling the Mediterranean, from the Iberian Peninsula to Egypt. Trade routes across the sea reopened, with merchants shipping goods from Italy to Egypt to Constantinople.

Then in 541 AD, reports of a mysterious plague epidemic appeared in Suez, Egypt. Increased commerce within the unified empire helped this disease spread like wildfire, as infected rats were transported from port to port via merchant ships.

By 542 AD, this plague had reached the heart of the Roman Empire: Constantinople. The dense population of this coastal city helped the disease spread like wildfire. The initial outbreak in the capital city lasted four months, and historian Procopius said up to 10,000 people died each day at the pandemic's peak. Bodies piled up faster than they could be buried, and the city reeked of death and decomposing flesh. 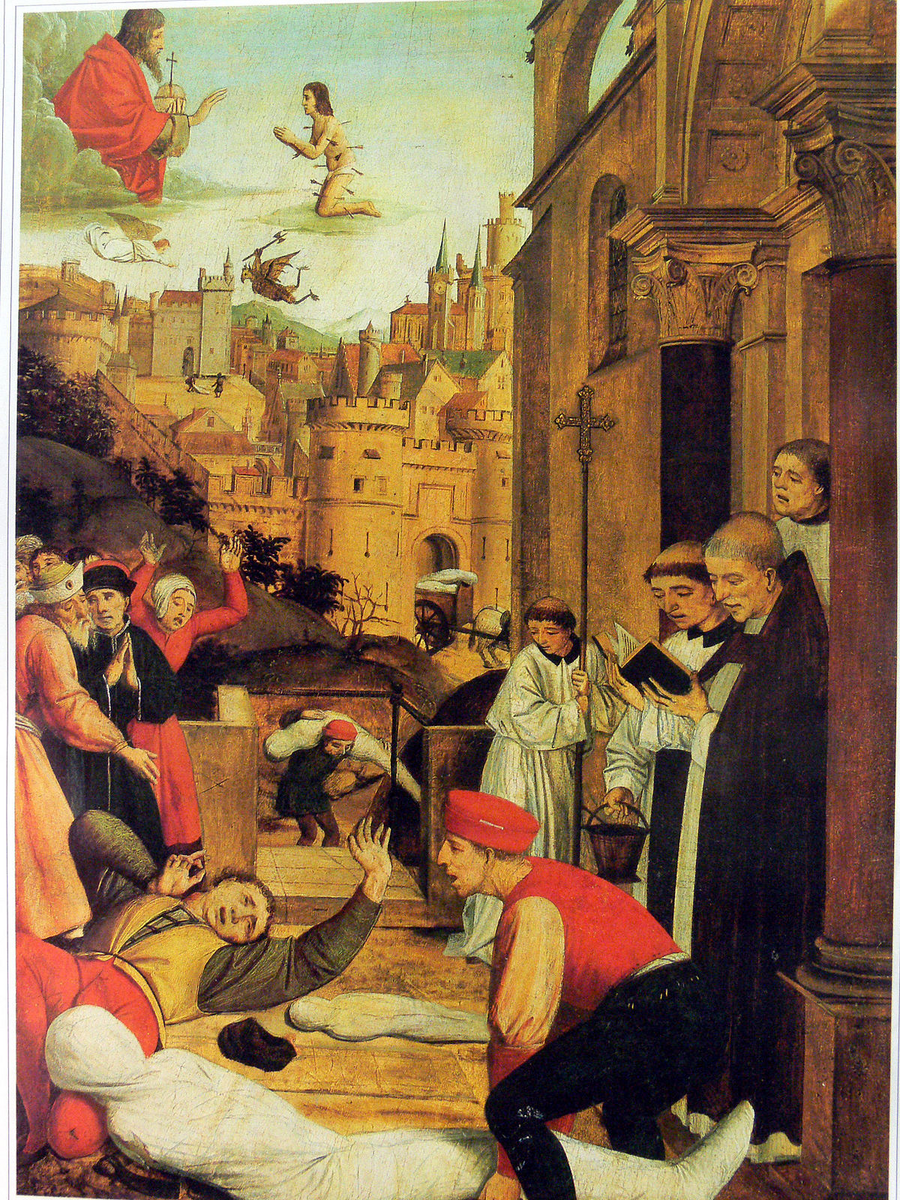 In just four months, time, 25-50% of the city's 400,000 residents perished from the plague. While the first wave in Constantinople quickly disappeared (largely due to half of the city's population now being dead), recurring breakouts occurred for the next two centuries. Across the entire empire, nearly 25% of the population died with estimates ranging from 25-50M people in total.

In the 1760s, Moscow was a wasteland. Peter the Great had recently named St. Petersburg Russia's new capital city, and Moscow quickly fell into disrepair. The now-abandoned Moscow attracted an influx of serfs and army deserters, and this growing population led to growing waste.

Human and horse waste, slaughterhouse debris, and factory pollution spilled into the streets and waterways. By 1767, plague outbreaks were well-documented throughout Europe. Leaders of all nations were aware of the Plague of Justinian and the Black Death, and they knew that poor sanitation could make an outbreak explode. The new ruler of Russia, Catherine II, moved to relocate all factories outside of the city to reduce waste, but her efforts were too little, too late.

In December 1770, a case of the plague was documented in Moscow. The government sent the military to quarantine cases in hospitals, but these measures did nothing to stop the spread. By September 1771, 1,000 people were dropping dead from the plague each day despite 3/4 of the city's population fleeing. Authorities set up chain gangs to dispose of bodies, but they couldn't keep up with the growing dead.

Governor Saltykov deserted the city, and Jacon Lerche, the newly appointed sanitary director of Moscow, shut down shops, taverns, inns, factories, and even churches in an attempt to enforce quarantines. Thousands of individuals were displaced, and dissent for the government grew.

In September 1771, citizens revolted against quarantine measures, believing they were part of a broader conspiracy. The mob hunted down and killed a local church bishop who had closed the doors to worship, as they thought he was "an enemy of the people". 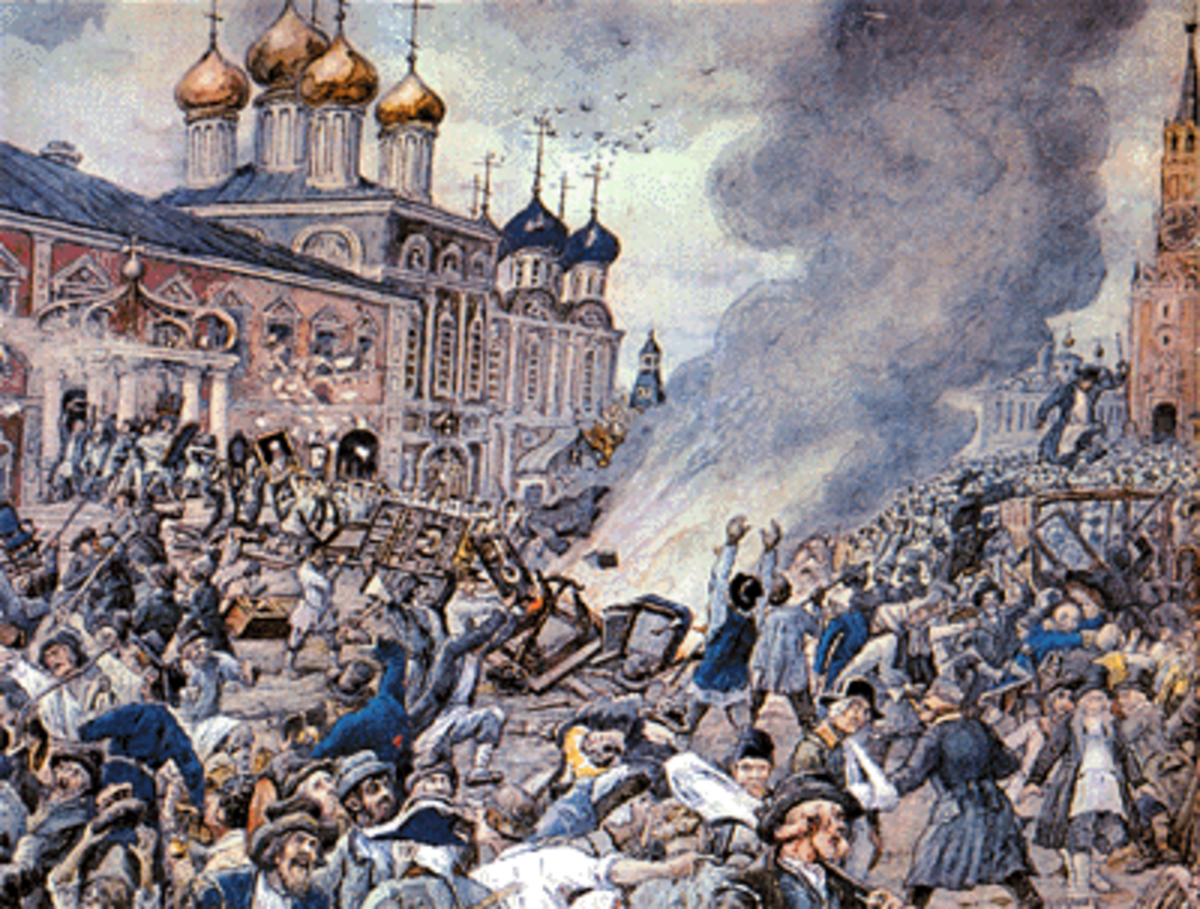 The United States broke away from the British empire in 1775 before engaging in an eight-year conflict to maintain their independence. This fight for independence was preceded by the French and Indian War, a seven-year conflict that pitted the American colonies against French forces.

Just 30 years after the Revolutionary War, the US and the British Empire once again fought in a two-year struggle known as the War of 1812. 30 years after that, we fought Mexico over the ownership of Texas in the Mexican-American War.

And just 20 years later, the country itself divided in two in the American Civil War. All of these conflicts were surrounded by dozens of domestic wars between the United States and indigenous peoples.

Just 34 years after the conclusion of the Civil War, we fought Spain in the Spanish-American War, which brings us to the 20th century. Anyone with an elementary understanding of history knows what comes next:

And everything that I listed above only covers major conflicts involving the US. Here is a list of every war ever for those interested.

All of these examples tell me one thing: we are living in incredibly precedented times. In fact, the only thing "unprecedented" is just how good life has been over the last decade+. Disease ravaged the western world for almost every century since the Plague of Justinian, yet we hadn't had a global pandemic since the Spanish Flu 100 years ago.

Since before our nation's founding, every generation in the US was involved in a large-scale military conflict until 1975. While we have had military conflicts in the Middle East since then, we haven't experienced true, all-consuming warfare in almost 50 years.

So why the disconnect? Why have the last two years felt so out of the norm? Because our personal experiences determine 99% of our understanding of the world, while the entirety of history comprises maybe 1%.

In reality, our personal experiences make up less than 1% of recorded history.

In statistics, we would call the outsized significance given to our own experiences sampling bias.

Let's zoom out a bit.

If the Plague of Justinian hit New York City today, close to 4M people would be dead by July. The city's infrastructure would crumble, the government would shut down, and it would take years to repair economic and social damages. For context, 5.9M people have died across the world from covid-19.

If the US had maintained its historic pattern of wide-scale warfare, thousands of men my age would have been drafted by the military to fight on the frontlines at some point in the 2010s.

But that isn't what happened. As a 24 year-old in the United States, I barely remember the Great Financial Crisis, my idea of war is mid-sized deployments in the Middle East, and I thought "pandemics" were something from medieval Europe.

So yeah, a Russian invasion and global pandemic felt unprecedented.

We humans tend to over-exaggerate the impact of our own personal experiences and minimize the reality of those from history.

Our understandings of history come from books and documentaries. Decade-long plagues are summarized in 10-paragraph articles. Millions of lives lost in war are covered as bullet-point statistics.

How could a few paragraphs in a book possibly compare to our current existence?

Books don't capture the suffocating fear of a Roman citizen watching half of her city drop dead in a matter of months from an unknown ailment, and wondering if the affliction will hit her next. A documentary can't teach you how dire the situation in Moscow was that dead, decomposing bodies piled on the streets for months. Museums can't convey the sense of terror felt in the pits of the stomachs of those arrested and sent to concentration camps across Europe in the 1940s.

History isn’t what happened, it’s just our accounts of what happened. But for those who lived it, I can assure you it felt all too real.

One day, the covid-19 pandemic will be just another entry on Wikipedia. A college student will write a research report on this disease and the responses from various nations. They'll cite different statistics on outbreaks and mortality, and probably highlight the role that vaccine distribution played in minimizing total damage.

But that college student won't understand the shock and confusion felt by all of us when international travel stopped world-wide. The fear that caused many to avoid going outside for months, and walk to the other side of the street if they approached someone else on a sidewalk.

That student won't understand the role that social media played in sharing so many opposing opinions. Do masks work or not? Is the vaccine dangerous? Are lockdowns ruining lives? Are nations with lax measures putting their populations at risk?

There is no way the student will grasp the feelings of anger and dissent shared between those with different beliefs.

The college student won't know anything about what any of us experienced over the last two years. He will just read a 10 minute Wikipedia article that portrays the covid-19 pandemic as a two-year blip in the history of diseases.

Now imagine the experiences, feelings, and moments that we miss when we read about prior events.

Behind every prior pandemic, and war, and any other historic event now summarized by a Wikipedia article, are countless individual stories. Lives lost. Heroic actions taken. Mistakes made. Love found. Laughter between friends. Tears over lost relatives. Embraces between loved ones. But we miss all of that.

Throughout history, the names and places change, but the human experiences remain constant. The worst catastrophes in our lives were shared by billions of others over thousands of years, while our greatest triumphs have been experienced dozens of times.

Because history isn’t what happened, it’s just our accounts of what happened. But for those who lived it, it was “real”.

This article isn't meant to downplay the significance of covid or Russia. This pandemic has affected millions of families, and violence in Ukraine will needlessly take thousands of lives.

That being said, these unprecedented times are actually quite precedented if you just zoom out.