Hello friends, and welcome to Young Money! If you want to join 3620 other readers learning about finances and career navigation, subscribe below:

*Apologies for the delay. I got caught up following the situation in Ukraine last night. Thoughts and prayers with those in Ukraine right now.*

Years ago when India was still under British rule, the British government grew concerned about the number of venomous cobras in Delhi. Hoping to reduce the number of snakes in the city, Britain offered citizens a bounty for every dead cobra.

Initially, this was a successful strategy; large numbers of snakes were killed for the reward. Eventually, however, enterprising people began to breed cobras for the income.

When the government became aware of this, the reward program was scrapped. Suddenly, these cobra breeders had thousands of now-worthless snakes. No longer serving any purpose, they were released back into the wild. 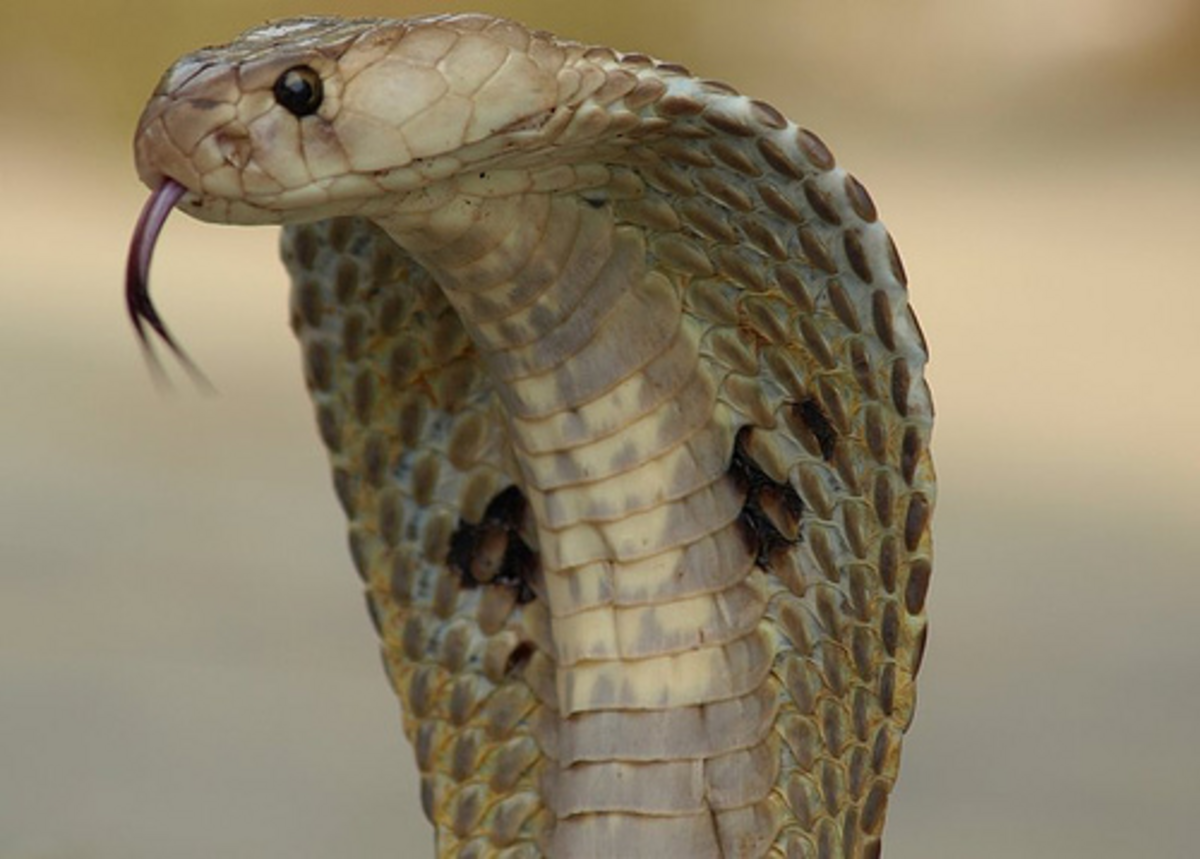 The "cobra effect" is one example of a perverse incentive: an incentive that has an unintended and undesirable result that is contrary to the intentions of its designers.

History is full of perverse incentives:

Charlie Munger once said, "Never, ever, think about something else when you should be thinking about the power of incentives."

The most powerful incentive in the world? Money.

Finance is full of seemingly irrational events that are actually quite rational when you understand the incentives at play. Let's dive in.

Crypto has been a fascinating case study on the power of incentives, especially for founders. Traditionally, companies that needed outside funding would raise money through venture capital firms.

Imagine that I wanted to raise capital to expand Young Money. I raise ~$4M in VC funding in exchange for equity. However, both mine and the investors' equity is illiquid, or locked up, for the time being. For me and my investors to realize our gains, we would need to reach one of two exit opportunities: acquisition by a larger firm or IPO.

If Young Money is successful, I will cash out with life changing money. If Young Money fails, my illiquid equity was now worthless. Get rich or go broke, a binary outcome. 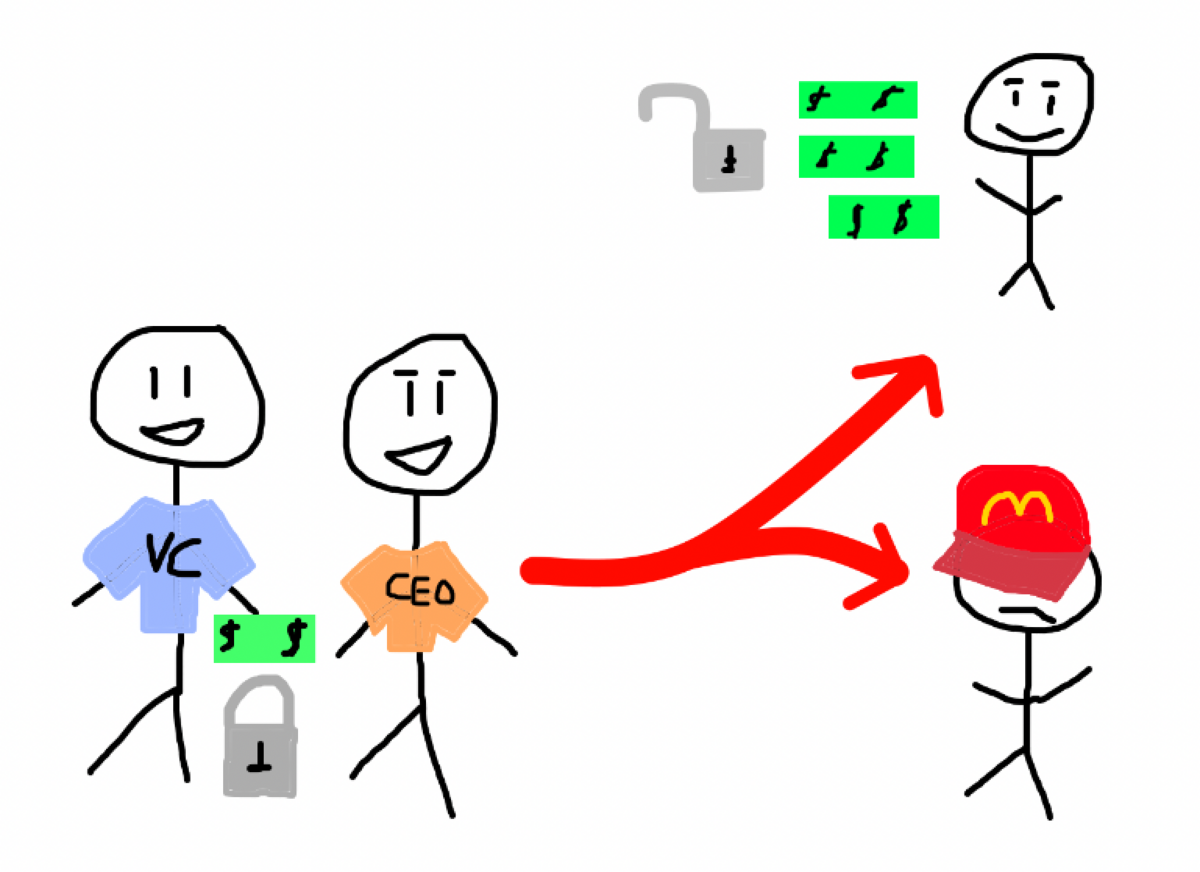 Crypto flipped the funding cycle around. While equity shares in private startups are illiquid for years, tokens are immediately liquid. Now, founders can issue tokens to raise funding.

Instead of raising venture capital, let's say that I raise $4M by issuing YM ownership tokens. These tokens are now tradable on crypto exchanges, so my equity is liquid from day 1. With venture capital, I can raise funding now, but only profit from my equity later. With tokens, the fundraise itself allows me to profit immediately. The financial reward is no longer dependent on the business outcome. It is dependent on your ability to sell the story of your future business outcome. 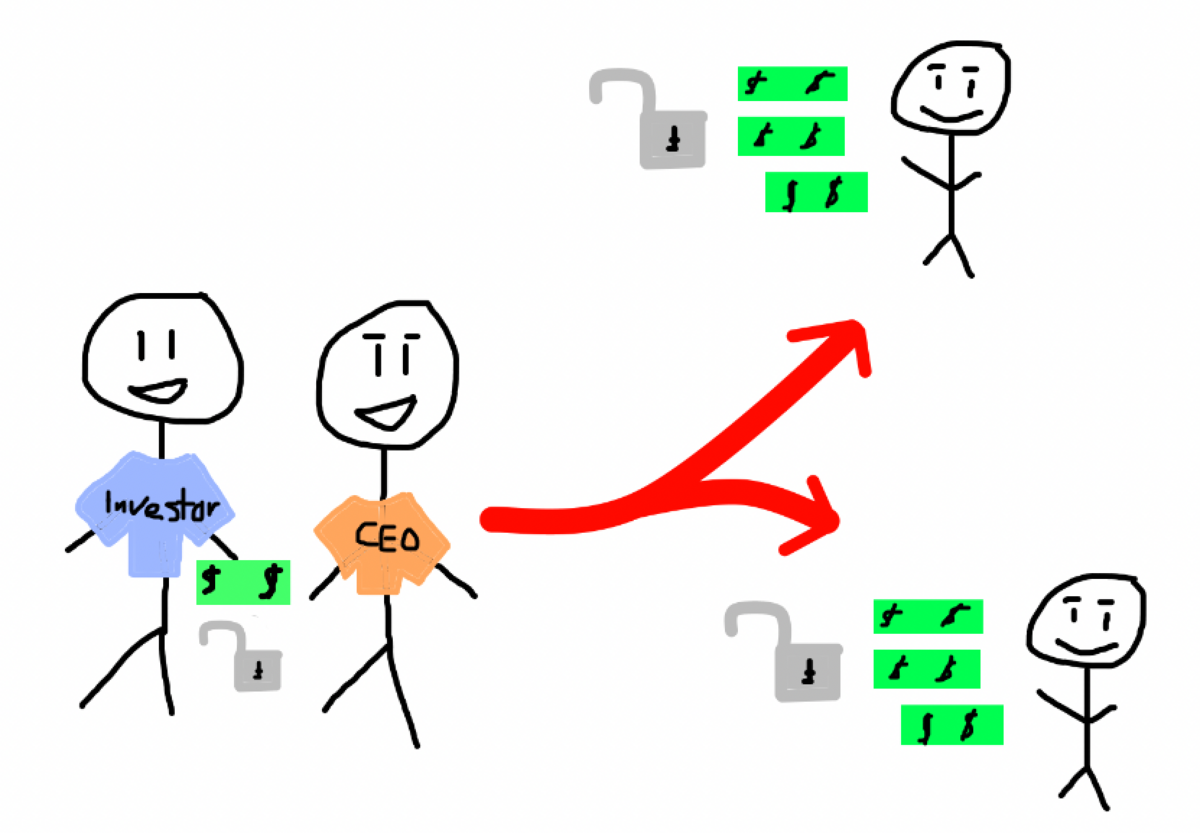 Don't get me wrong, there are ways to better align my incentives with those of other token holders. Lockup clauses would ensure that I couldn't just dump my holdings the moment that I raise capital, for example. Still, the tokenization of startups has created an easier* opportunity to profit from products before they are built.

*I say easier because SPACs are the OG pre-product grift. More on that later.*

Profit now, build later. The incentive structure has been flipped.

You don't even have to build a project or start a company. You could just create a cryptocurrency with no utility, offer celebrities like Paul Pierce, Kim Kardashian, and Floyd Mayweather tokens in exchange for pumping it to their millions of followers, and dump on their audiences for exit liquidity.

.@espn I don’t need you. I got
@ethereum_max I made more money with this crypto in the past month then I did with y’all in a year. TRUTH shall set u Free 🤪🤪 my own Boss
check it out for yourself 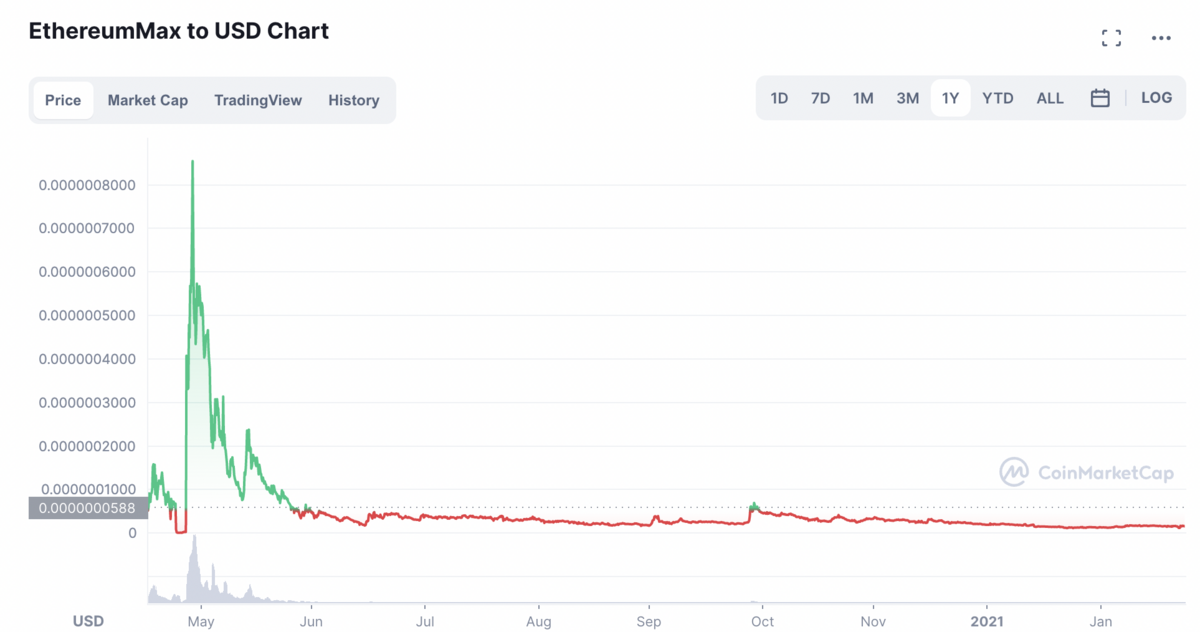 Instead of dedicating 90% of your efforts to building and 10% to selling, the key to getting rich is building just enough to convince someone else that your project shows real promise.

Wrong. In a year that the S&P 500 was up 29%, only three hedge funds on the above list outperformed. Yet these companies manage billions and billions of dollars. What gives?

The 2&20 fee structure, baby. Hedge funds don't get paid for outperforming the market. They get paid for managing as much money as possible.

Generally, hedge funds charge a 2% management fee on assets under management, + 20% of profits over a certain benchmark. But the benchmark doesn't have to be the S&P 500, NASDAQ Composite, or the Dow Jones. It can be whatever they want. Oftentimes, it is just 20% of all positive returns.

Imagine that a $10B fund using a 2&20 fee structure generated 10% returns last year, and performance fees were applied to total positive returns. The fund managers would have taken home $200M in management fees (2% of $10B) and another $200M in performance fees (20% of $1B).

Professional asset management is shrouded in a cloak of mystery that leaves investors wondering what they are missing out on. Ironically, most investors would be better off sticking with index funds.

Hedge funds get paid for 1) managing a lot of money and 2) not losing much of it. They get rich by growing their capital base, not chasing alpha. Underperformance is a feature, not a bug.

After hitting $85 on its first day of trading, Robinhood is now $10 per share. 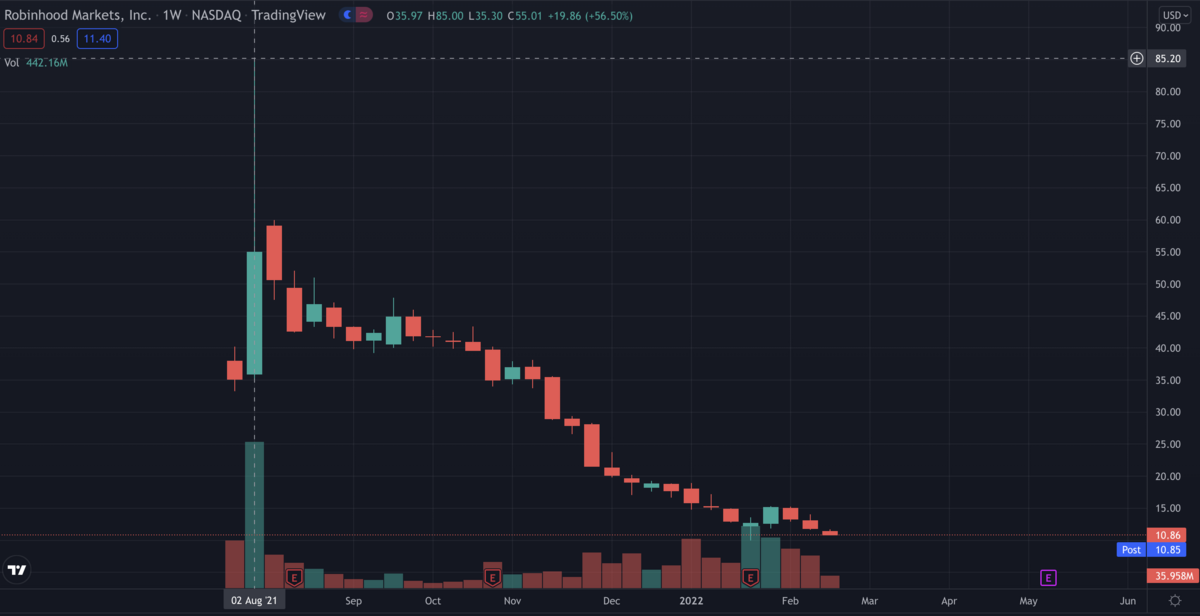 It's incredible just how poor this brokerage has done in the public markets, but Robinhood is no outlier. It is actually the norm for recent "tech" IPOs. 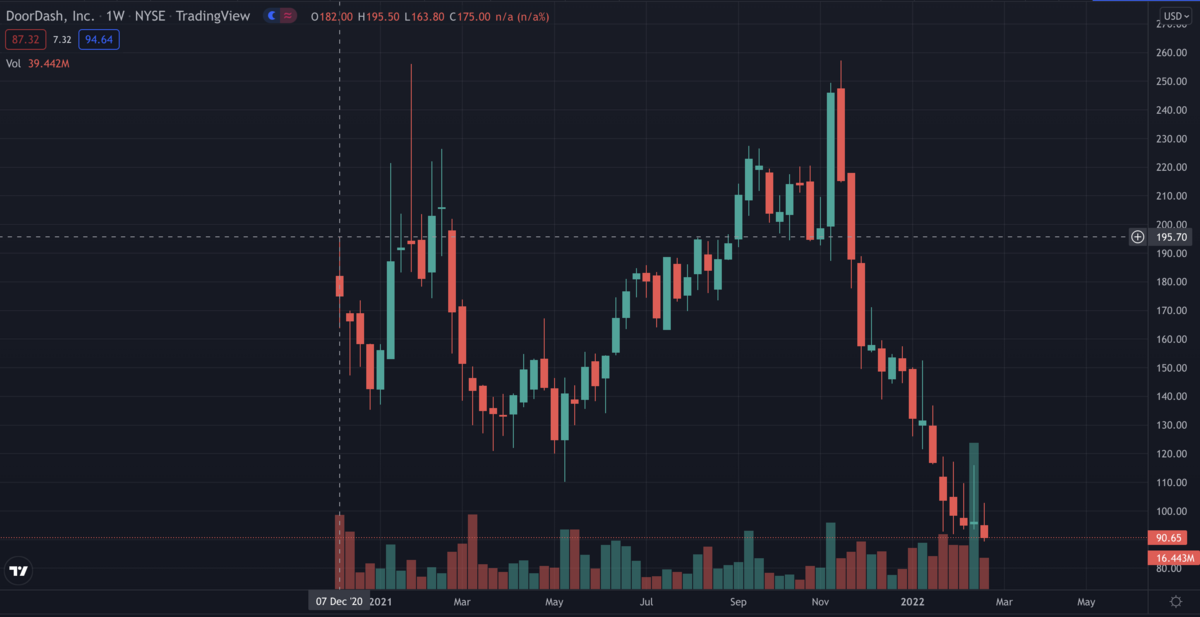 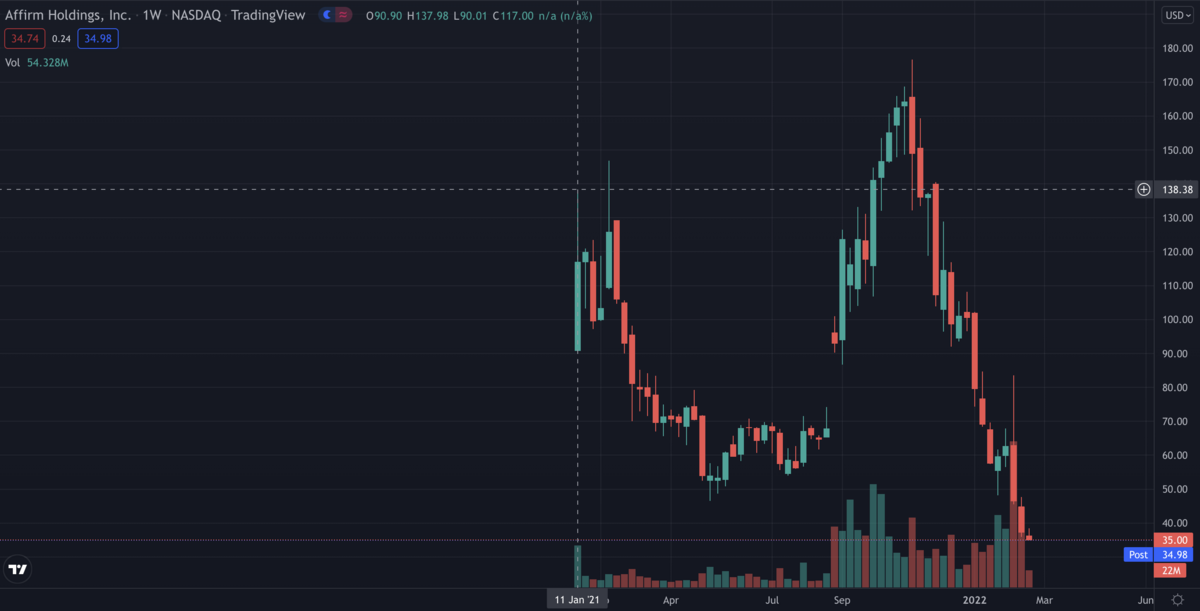 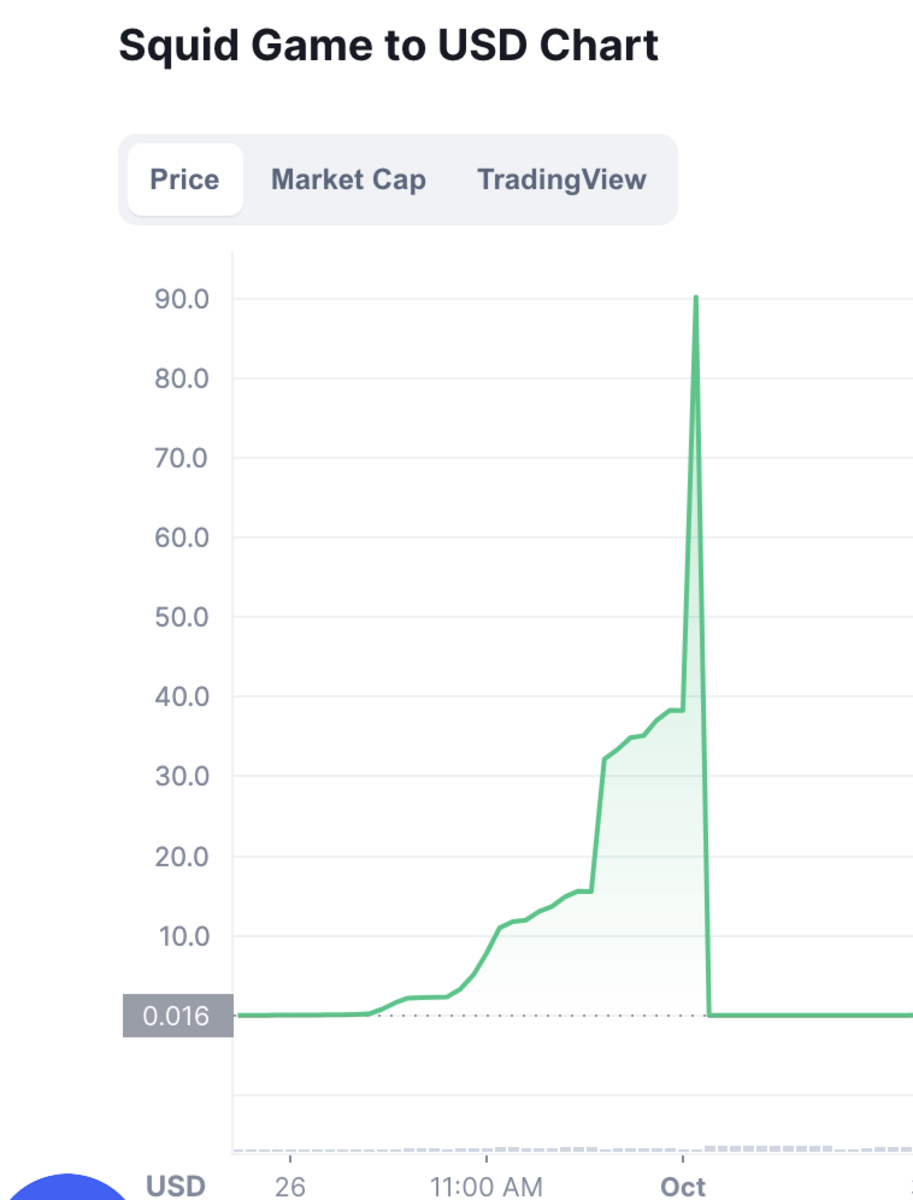 Trading volume on the day that Squid Game coin dumped? A measly $4M.

Meanwhile, 442M shares of Robinhood stock traded on the day that it hit $85. At a midpoint price of ~$50 per share, that is over $20B exchanging hands in a single day. The stock has lost more than $30B in market cap since then.

Robinhood, DoorDash, and Affirm are three of several hot tech companies that IPO'd in the last year or so. in 2020 and 2021, tech stocks were trading at nosebleed prices. Late-stage private companies were raising capital at outrageous valuations, and many knew that their growth rates were unsustainable and pandemic tailwinds were due to disappear.

For example, $144M of Robinhood's $565M total revenue in Q2 2021 came from DOGE coin trades 🤨 Is that really a sustainable business model?

Thanks Vlad Tenev, very cool. Obviously Robinhood's founders and investors knew that growth was going to slow down, but who cares? When your company made hundreds of millions selling order flow on GameStop and DOGE, might as well cash in by dumping your stock on retail (and Cathie Wood).

Once again, incentives drive everything. Secure the bag now, and deal with the fallout later.

Special Purpose Acquisition Companies, or SPACs, were all the rage in 2020 and early 2021. I would know, I traded them like a madman for a year. SPACs appealed to many early-stage companies because they were quicker and more flexible than traditional IPOs. Instead of hiring a bank to help price your IPO, private companies could find a SPAC, which was basically a publicly traded bank account, and "reverse merge" to go public.

SPACs give private companies money in exchange for shares. A $100M SPAC merging with company XYZ at a $1B valuation would receive 10% of the shares in the new company, for example. 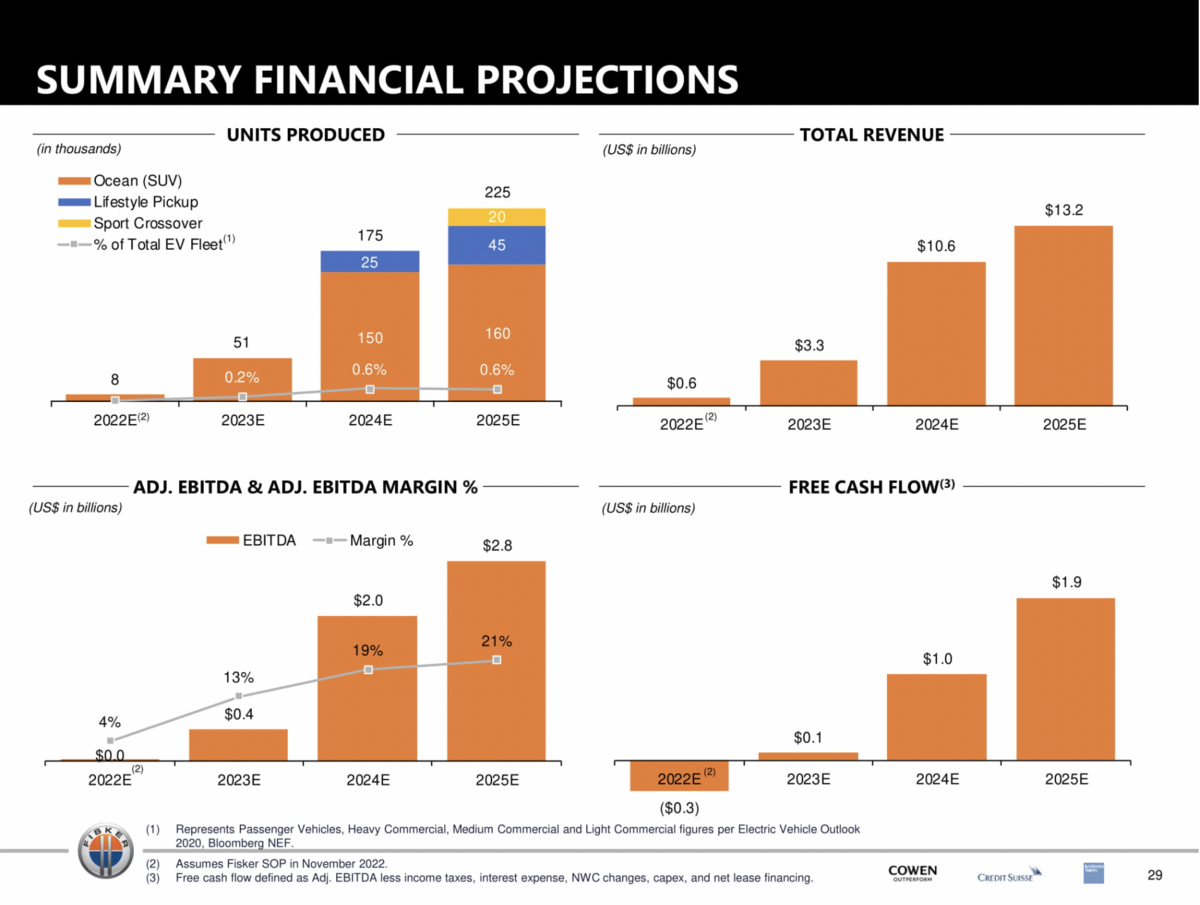 Fisker went public at a $3B valuation. While this may seem expensive, it's actually quite cheap by the company's own incredibly realistic financial projections. That's only 3x 2024 free cash flow! 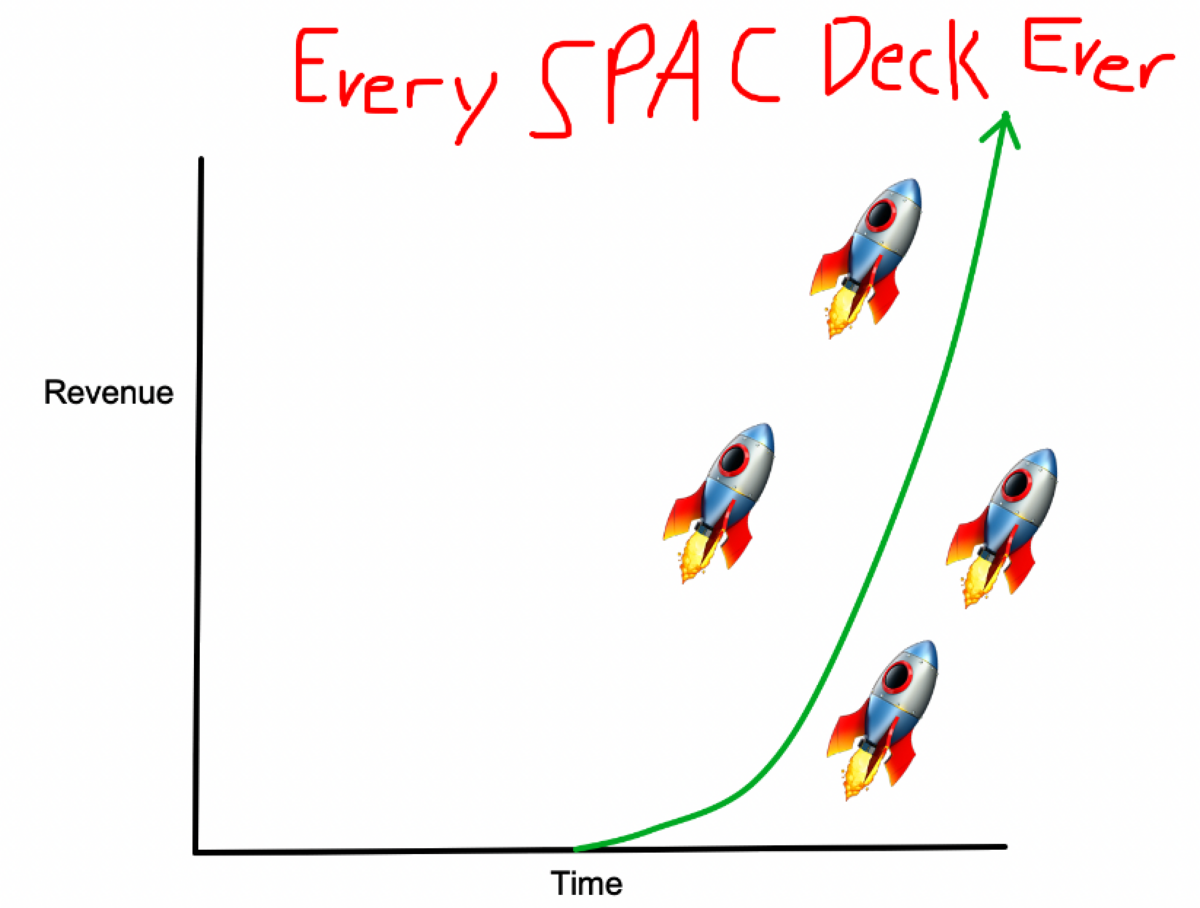 Chamath Palihapitiya, the CEO of Social Capital, was the Sultan of SPAC. After taking space tourism company Virgin Galactic public in 2019, he closed deals with OpenDoor, Clover Health, and Sofi. He was also an active investor in other SPACs as well, participating in PIPE investments for companies like Proterra, Desktop Metal, and Metromile. By February 2021, the self-proclaimed next Warren Buffett was on top of the world.

Every single SPAC he was involved in was killing it.

It's crazy $IPOD and $IPOF are pre-deal and trade at >50% premiums to trust... but also persistence of SPAC performance for \@chamath is wild too.

Not a single loser / SPAC below trust value.

Im about to really fuck some shit up...just fyi.

What happened since then?

(Berkshire Hathaway is up 27% over the last year, by the way)

Life comes at you fast. Many of these companies, especially those that were "pre-revenue" had no business being publicly traded. (However, if I'm ever unemployed in the future, I will self-identify as "pre-revenue". That's an incredible line.)

Why take so many of these high-risk companies public? Incentives, obviously. And the incentives to launch a SPAC are quite lucrative.

Closing a SPAC deal is really hard work, and SPAC sponsors need to be compensated for creating so much shareholder value! According to the company's prospectus, IPOA's sponsors received 17.25M shares of stock for a one-time, $25k contribution.

SPACs price deals at $10 per share, so IPOA's sponsors would receive $172.5M worth of stock assuming that any deal was closed. So they take space tourism company Virgin Galactic public. While the company briefly underperformed post-IPO, hype surrounding the space sector eventually propelled the stock to $60 per share. 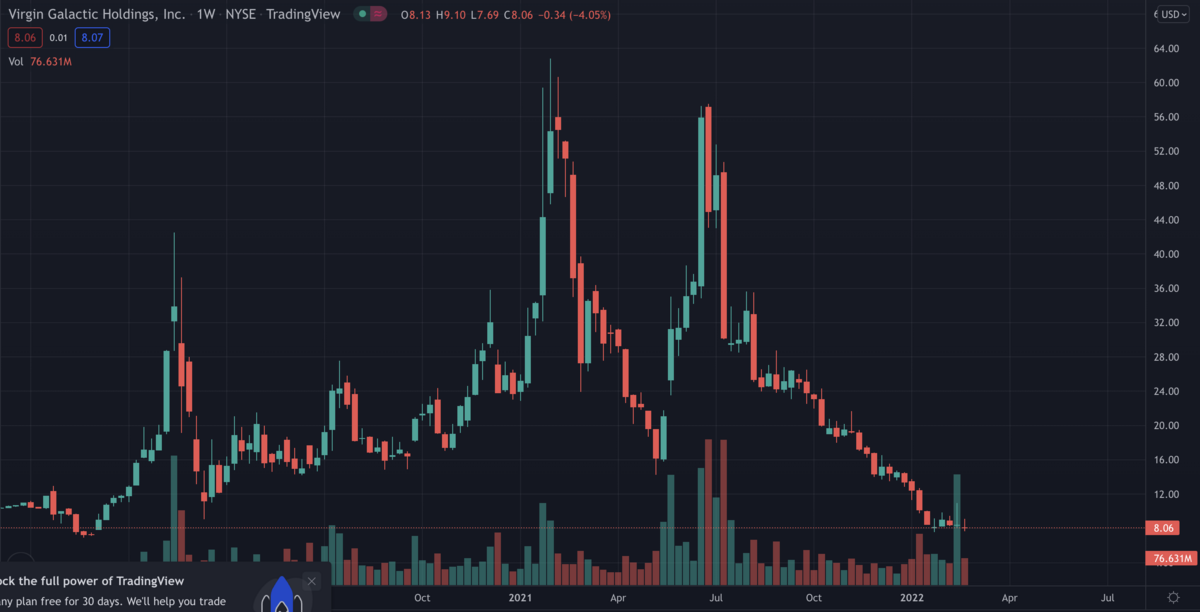 But Virgin Galactic has missed deadline after deadline, and its stock is trading at $8 as a result. Luckily, Chamath sold 3.8M shares at $25 per share to manage some liquidity last year before stepping down from the board of directors last week.

Please note that I filed a Form 4 for the sale of 3.8M shares of SPCE. I sold these shares to help manage my liquidity as I fund several new projects starting in 2021. I remain committed and excited for the future of SPCE. Just wanted to be transparent.

Virgin Galactic's lackluster execution isn't an outlier. Pretty much every SPAC from 2020 has already missed its 2022 projections and scratched forward guidance altogether. Not that this is a surprise. After all, the combined 2025 projected revenues from every 0 revenue EV start up that went public through a SPAC was something like $100B. Certainly seems, realistic, no?

For the sponsor, it doesn't matter if the company is a dumpster fire. For the small price of $25k, you get tens of millions of shares! SPACs are asymmetrical bets for these sponsors. Your company crushes it and hits $20? You make a cool $200M. Your company sucks and hits $2? You still made $20M.

Sure, due diligence for good deals would be cool. But you know what's really cool?

$IPOC is merging with @Clover_Health to help bring better healthcare across America.

Our one pager is attached.

You can register to hear about the transaction from myself, Clover CEO Vivek Garipalli and President Andrew Toy at 4pm ET here:

Tweeting a one-page word document about a shady health insurance company to your millions of followers, and let retail investors pump the price.

This certainly created millions of dollars in shareholder value, right? 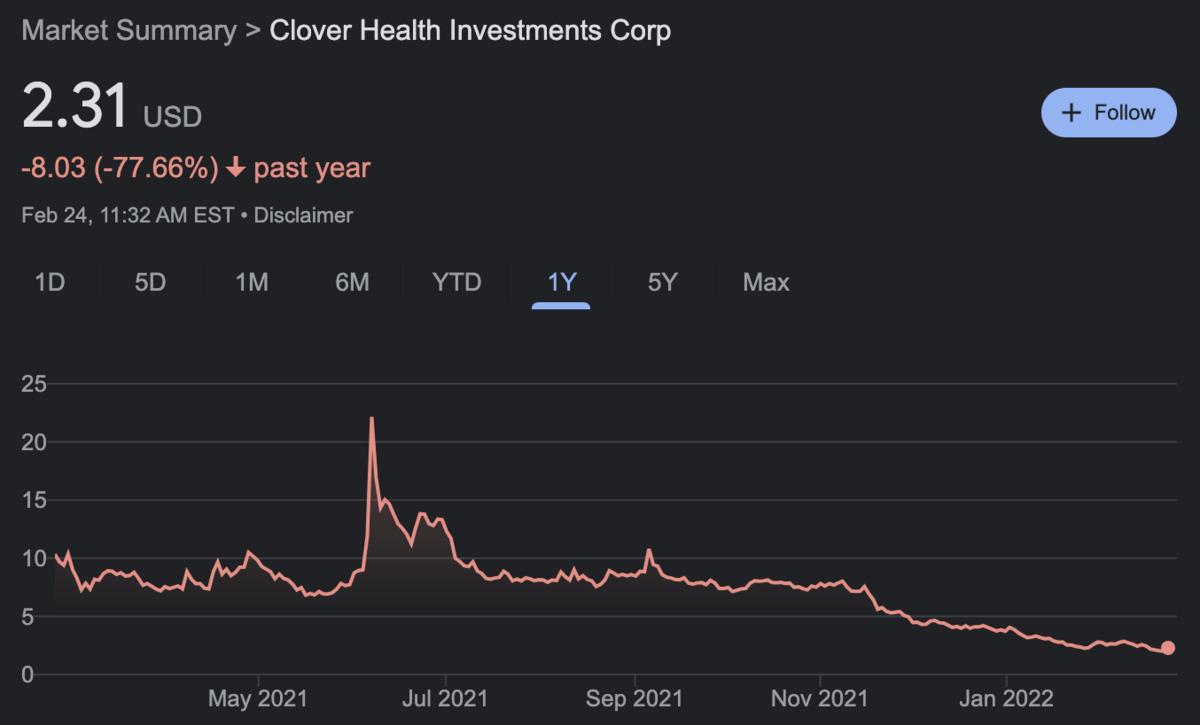 Well, maybe not for the investors who paid $10+ per share. But for the sponsor who cashed in on their millions of free shares? Hell yes. Much value creation, very cool.

Irrational events in financial markets seem much more rational when you consider the incentives that drive decisions. Easy money is a powerful temptation, and most public market "train wrecks" are actually quite lucrative for their conductors, just not the passengers. Be wary of opportunities that put you at odds with your conductor.

If a company is raising insane amounts of money before every actually doing anything, run far, far away. If a prominent investor takes a company public at a several billion-dollar valuation, dumps his shares, and resigns from the board all before they take a single customer to space, the stock is probably going to zero.

Anyways, I think I'm going to take this newsletter public through a SPAC. Is $IPOD still looking for a target, Chamath?