The Paradox of Choice

How we can be paralyzed by our flexibility.

Hello friends, and welcome to Young Money! If you want to join 6,815 other readers learning about finances and career navigation, subscribe below:

Three things before we get started:

Today's piece is brought to you by World Builders

"The most powerful person in the world is the storyteller." – Steve Jobs

World Builders, a newsletter written by my friend Nathan Baugh, digs into how these companies do it while giving you actionable, data-driven advice to level up your own storytelling. All signal, no noise, and sent 1x per week to not clutter your inbox. Did I mention it's free? Sign up here.

An Abundance of Choices 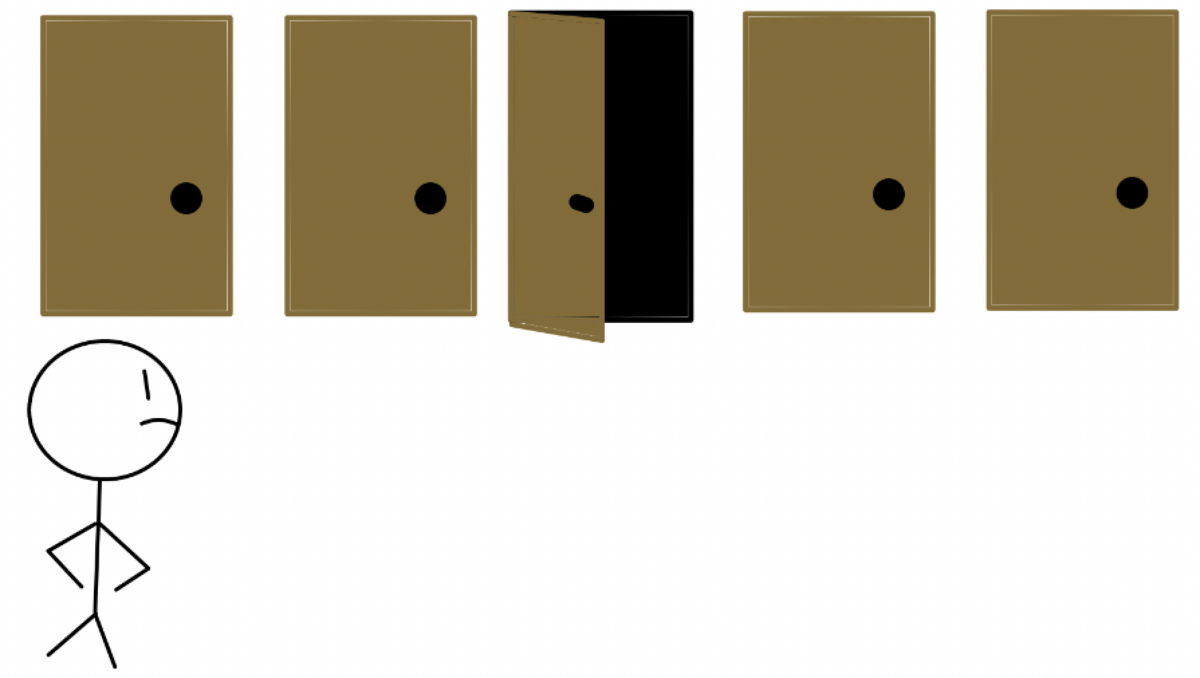 Barry Schwartz, The Paradox of Choice

Barry Schwartz is an American psychologist and author whose research addresses morality, decision-making, and the inter-relationships between behavioral science and society.

In his best-seller book, The Paradox of Choice, Schwartz explains why the explosion in consumer choice has, ironically, made us collectively miserable. We tend to value freedom highly, so it is counterintuitive that an increase in freedom leads to a decrease in satisfaction, but more often than not that is the case.

The reason? Every choice comes with its own opportunity cost. An abundance of options doesn't free us from difficult decisions, it makes every decision difficult.

We have all experienced this in our own lives. Try buying a pair of running shoes, and you'll come across a dozen different options. Each model has its pros and cons, and no single brand stands out head and shoulders above the others. The more you study your options, the more you struggle to make a decision. No matter what you choose, you'll face a tradeoff of some sort. Comfort vs aesthetics. Price vs quality. Brand appeal vs practicality. Instead of being happy with any option because they are all good, you can only think about what you would lose by not choosing the others.

Extend this plethora of options from running shoes to literally every aspect of our lives, and you can begin to grasp the scale of choice paralysis that we are dealing with. Our brains quite literally aren't designed to deal with this abundance of choices.

We Weren't Designed for Optionality

For most of human history, 90% of our time was spent trying to satisfy the bottom levels of Mazlow's hierarchy of needs. Relationships were simply a derivative of community, and few had time to ponder abstract concepts such as achieving one's creative potential. 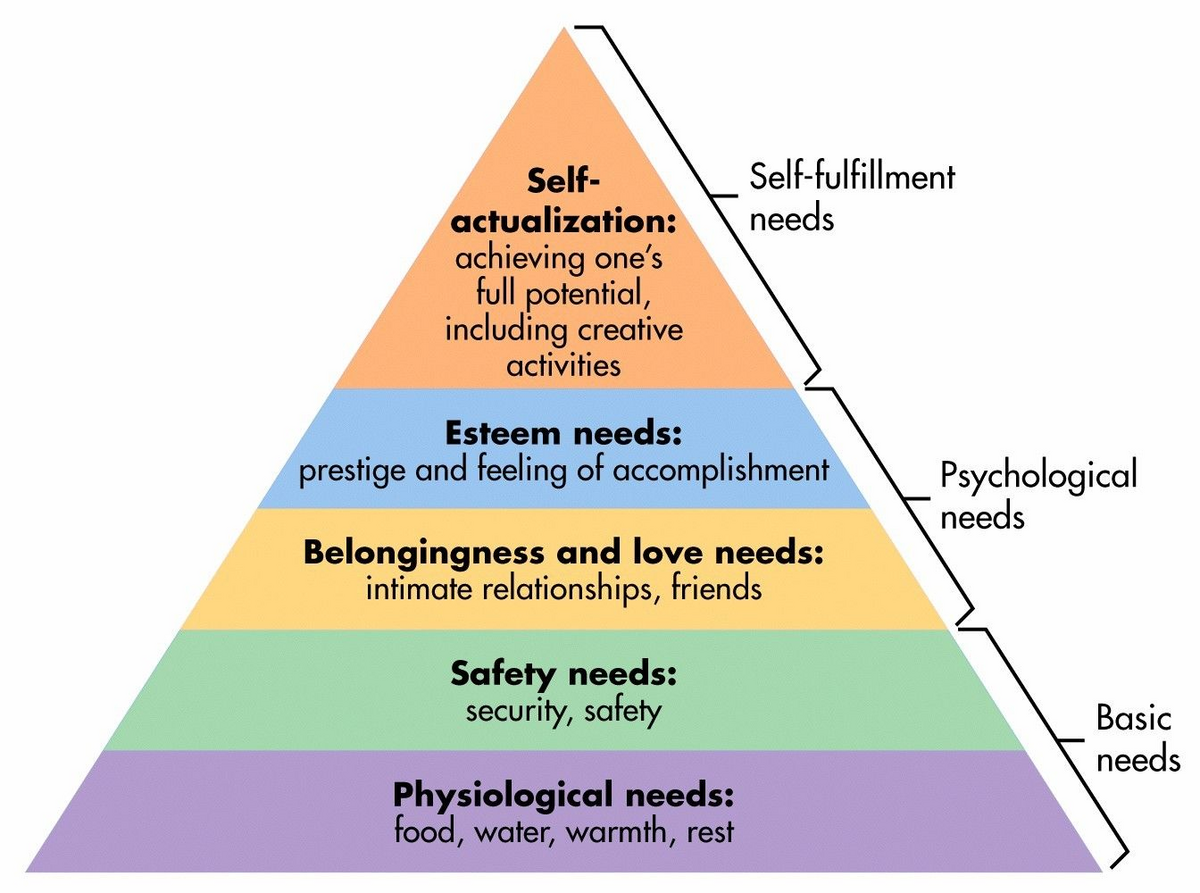 Early hunters and gatherers drifted around as groups, spending every waking moment tracking prey, preparing meals, constructing shelter, or providing for youth. You had your 50 tribe members, your respective roles, and your land.

In medieval Strasbourg, if your father was a blacksmith, you would likely learn his trade and eventually take over his shop. You would spend your life in your town, marry a woman from a local working class family, and keep the cycle going for the next generation. Even upper-class families would operate within their own aristocracies, arrange marriages to forge alliances, and maintain their spheres of influence.

Societies around the world always operated within their own individual bubbles. While these groups may have vaguely known about each other, few members other than emissaries, sailors, and explorers made significant contact with people from outside of their circle. You worked, married, and lived within your community and your community alone. 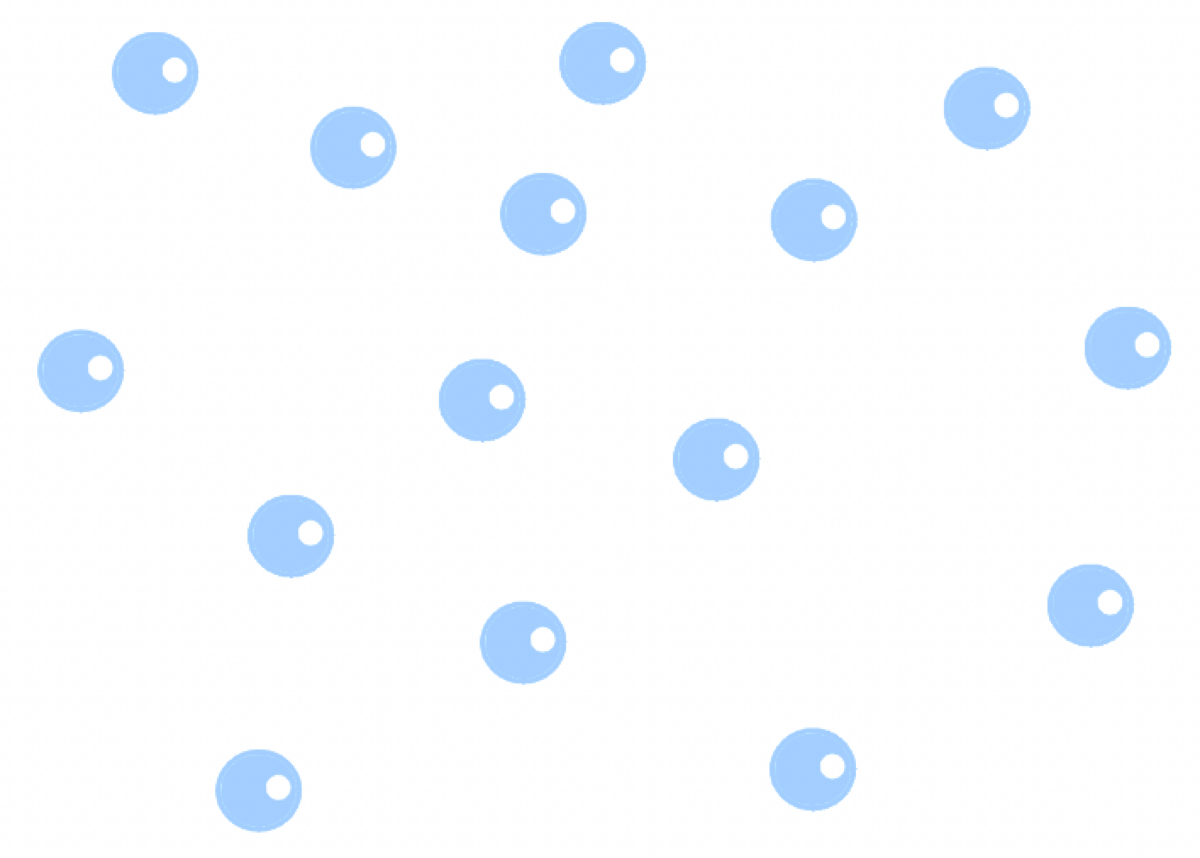 As we rolled into the 1900s, society evolved to the point that individuals could, for the first time, pursue a variety of different trades. You could graduate from college, take up your profession of choice, and go on with your life. Cars and planes made travel easier, and these bubbles came into contact more and more.

But even then, most individuals planted roots early, settled down, and lived within their communities. While different societies grew more aware of each other, they remained largely separated. 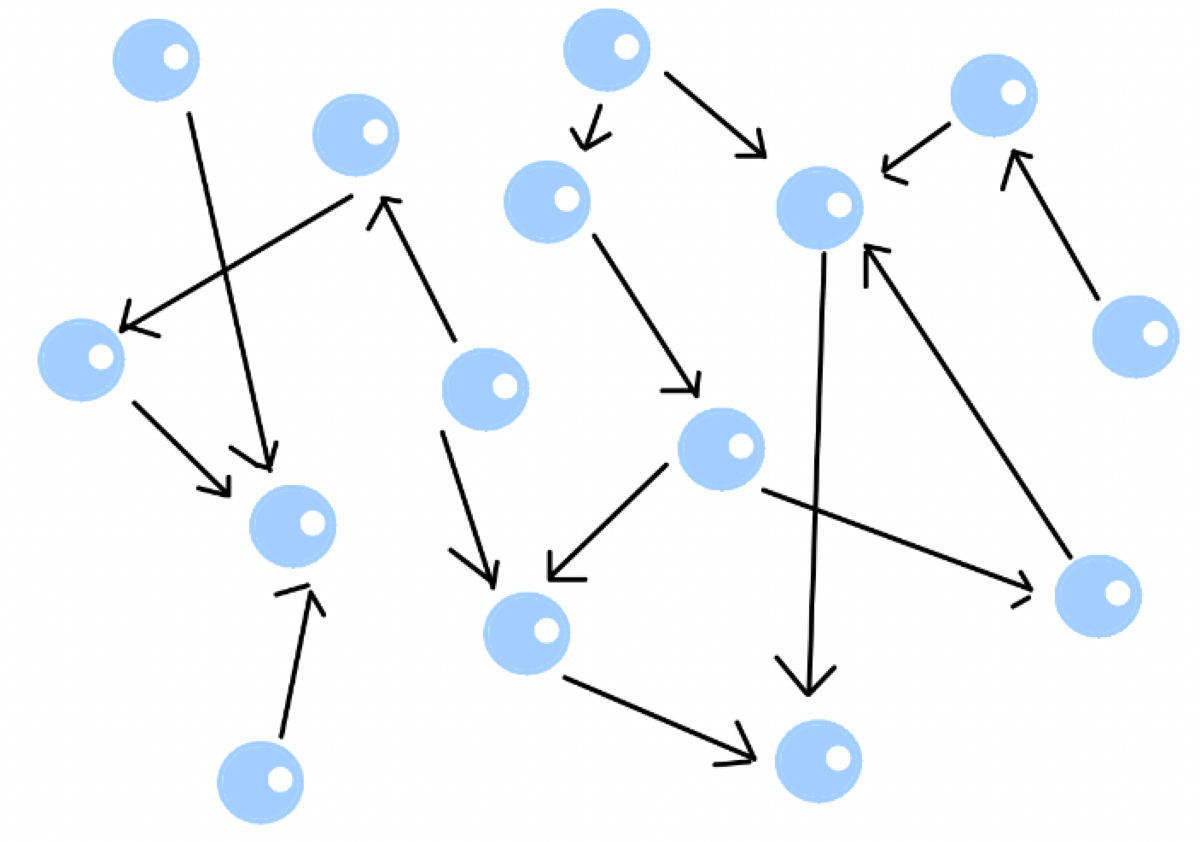 The internet changed everything. Suddenly, the knowledge base of the world was at our fingertips. Any skill could be learned from YouTube videos. Any place could be explored on Google. Any person could be contacted via social media. The physical boundaries that separated our millions of worlds evaporated, and the world became a massive, interconnected network of information and opportunity. 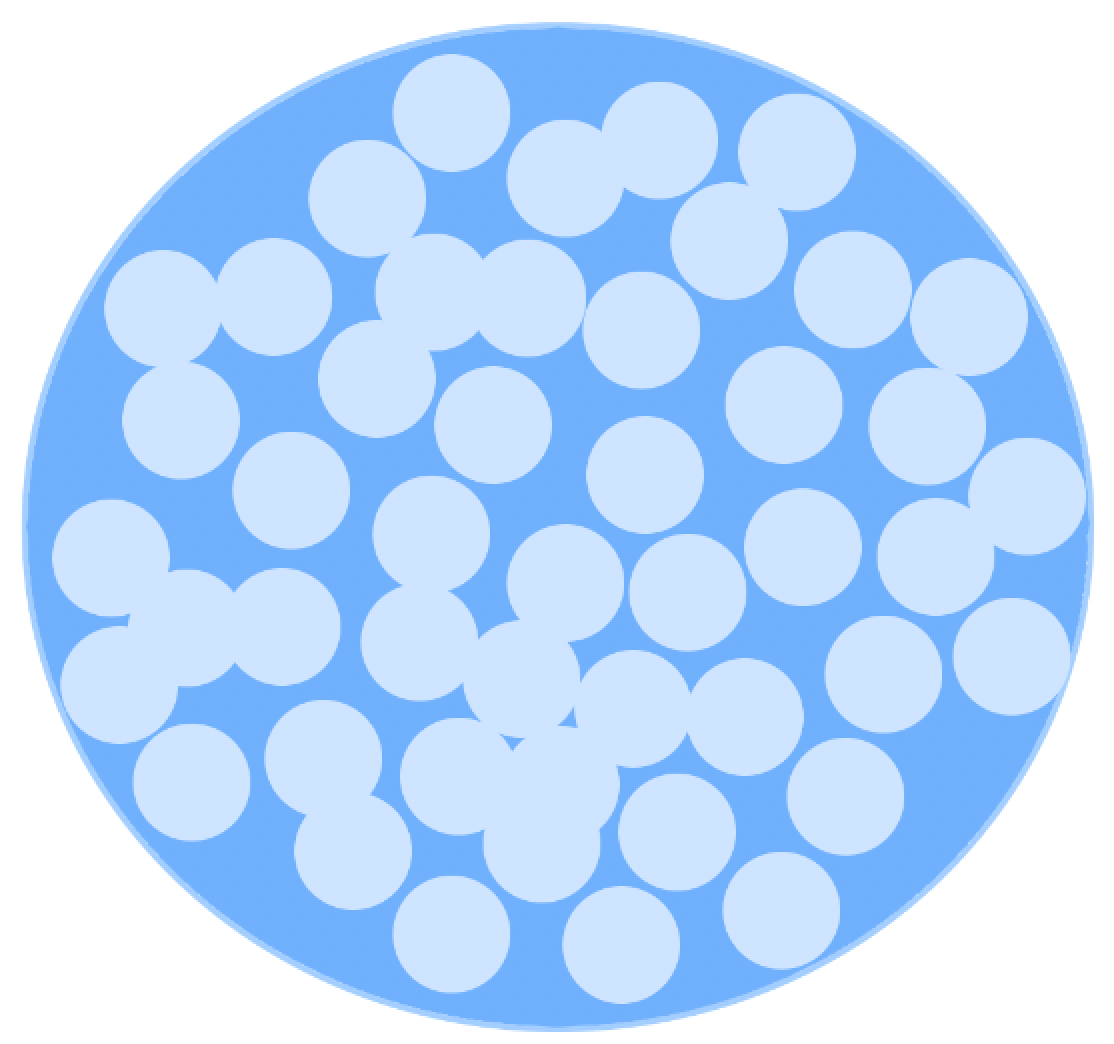 The internet turned thousands of years of evolution and and societal development upside down in a single generation, and we weren't ready for it.

What we do, who we build relationships with, where we live, the possibilities for every aspect of our lives has been permanently expanded by a degree of the umpteenth power thanks to the internet.

Thanks to remote work, you can now work any "white collar" job from anywhere in the world with an internet connection. Social media and dating apps have made it easy to instantly engage with anyone and everyone, and we can stay in touch with former contacts indefinitely, regardless of location. International flights have made it possible to travel from anywhere to anywhere in under a day.

We are no longer shackled by our geographic boundaries, we are paralyzed by our plethora of options.

The Issue with Optionality

The opening paragraph of David Perell's "Hugging the X-Axis" essay struck a chord with me:

"I’ve always struggled with commitment. In a world as grand as ours, shouldn’t we try to experience it all? Change it up. Visit every country. Try a bunch of careers. The menu of life is vast, and it’d be a shame to only order a single entrée."

Perell continues to describe the pursuit of optionality as "hugging the X-axis". Optionality is good in that it provides the freedom to do whatever we want, to advance along the X-axis, but pursuing optionality for optionality's sake is a fool's errand. The X-axis is filled with breadth, but lacking in depth. The greatest rewards, paradoxically, come from the strongest commitments. From minimizing one's flexibility. From going all in. 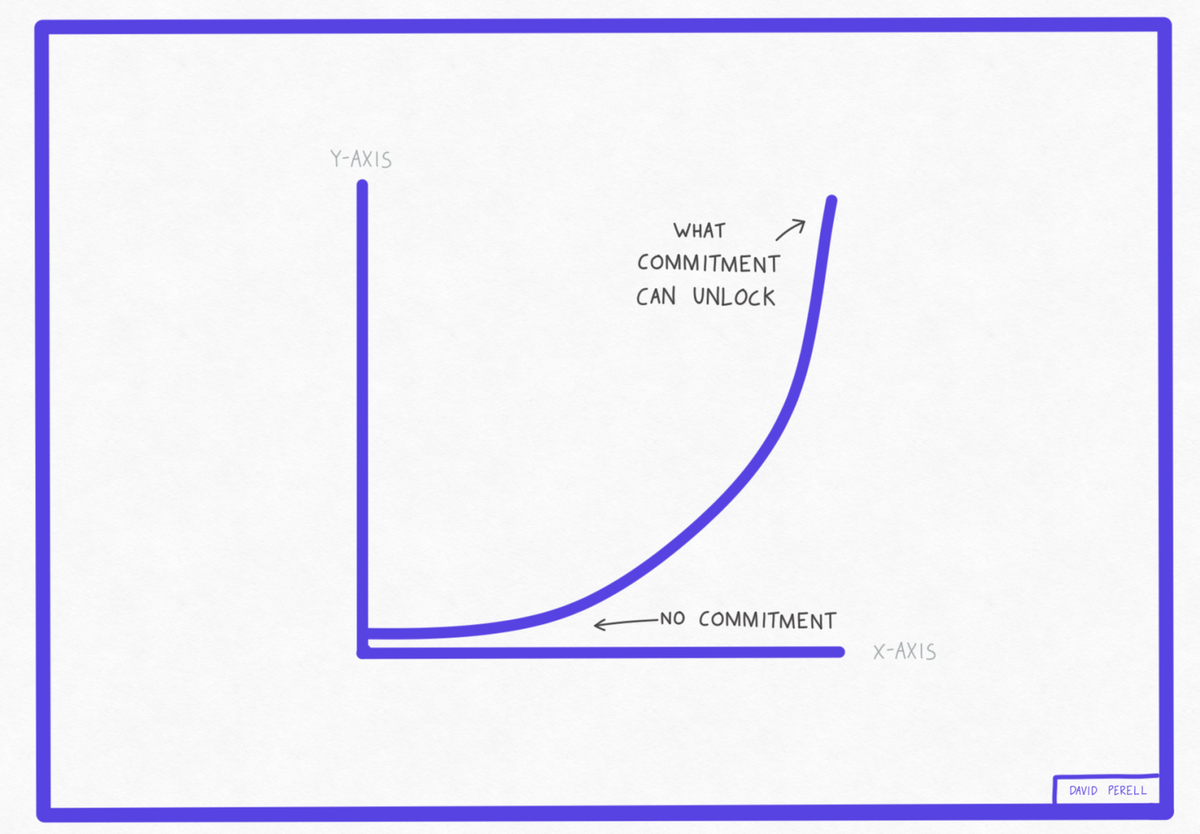 The end goal of relationships is marriage, a commitment to another soul for life. The best athletes in history: Tom Brady, Serena Williams, Tiger Woods, had an obsession with perfecting their crafts. Elon Musk, the greatest entrepreneur of our generation, went all-in on PayPal before rolling 100% of his profits into Tesla and SpaceX. There was no diversifying, he quite literally put all of his money behind his efforts. It was succeed or go bust.

Far from valuing flexibility and "keeping their options open", the best of the best aggressively remove everything from their lives that could possibly hinder their successes.

This is something that I have struggled with, and it has only accelerated over the last year.

I graduated from college in December 2019 and took a job in Atlanta right when Covid hit. Like many of you, I lived in groundhog day for 18 months. Wake up, roll out of bed, log on to my computer, "work," log off, rinse, repeat.

After a year and a half, I felt like I was going insane. Maybe it was the monotonous pattern in which I found myself living, maybe it was the sudden realization that life is all-too-short and I should do something about it. I don't know.

I did, however, know two things in that moment: I was planning to move to NYC for business school in August 2022, and I had enough money saved up to cover my expenses until I got there.

Then and there, I made the decision to pursue freedom to its fullest extent for a year. I hadn't been single since I was 20, so I broke up with my girlfriend. I was sick of my job, so I quit when I received the "return to office" email. I hadn't had a chance to really see the world, so I bought a one-way ticket to Barcelona and lived out of a backpack in Europe for four months.

Motivated by an existential sense of FOMO, I decided to pursue freedom to its fullest extent for a year. No responsibilities, no obligations, just a pure, unadulterated exploration of everything this life has to offer. All I wanted to do was see the world, meet new people, and write.

Nine months, 23 countries, and 100+ blog posts later, here we are. I started writing as a way to pass the time. Maybe after a few months, a company would hire me to write for them until I started grad school.

Ironically, writing has become a lucrative and fulfilling activity in and of itself, and it's a job that I can do from anywhere. Writing unlocked an unmatched level of geographic and career freedom, which puts me in an enviable position.

But this enviable position comes with its own, admittedly privileged, set of problems. When you can live anywhere, where do you live? When you can do anything, what do you do? When you can be anyone, who do you choose to be?

Do you go to the graduate school that you worked so hard to get into? Do you triple down on the writing and kick grad school to the side? Do you move to New York to pursue opportunities in the Big Apple? Do you move to DC with close friends? Do you stay in Atlanta? Do you throw a dart at a map, grab a suitcase, and go wherever it lands?

There's no blueprint for how to live your life, and figuring out what is the "most right" decision is a difficult process.

No one likes making unpleasant decisions or having tough conversations. Think about quitting a job that you hate or breaking up with someone who isn't right for you. Easy in theory, excruciating in practice. Yet while these decisions are tough, you know what you have to do. they are binary decisions with right and wrong answers. Making these decisions is painful in the moment, but gratifying afterwards.

When you have an abundance of good choices, the problem is reversed. You don't know what is "right" and "wrong," because every option is right. The aftermath of these decisions isn't filled with gratification and relief, it's filled with doubts and thoughts of "what if," because you know that choosing one good action means you must reject other good actions. So you find yourself paralyzed by indecision.

The toughest decisions aren't between good and bad, they are between good, good, and other good. We have infinite choices, but finite time. Dozens of paths, but only one body. We live in a world driven by opportunity costs, and the opportunity cost of everything has never been higher than in our modern era of abundance.

I have mastered the art of flexibility. Making the transition from flexibility to commitment? That's a different story.

While our options are infinite, our time is quite finite, making time the world's most scarce asset.

How do you decide where to commit your precious time? What opportunities are worth this scarce asset? Well that's the million-hour question, isn't it? 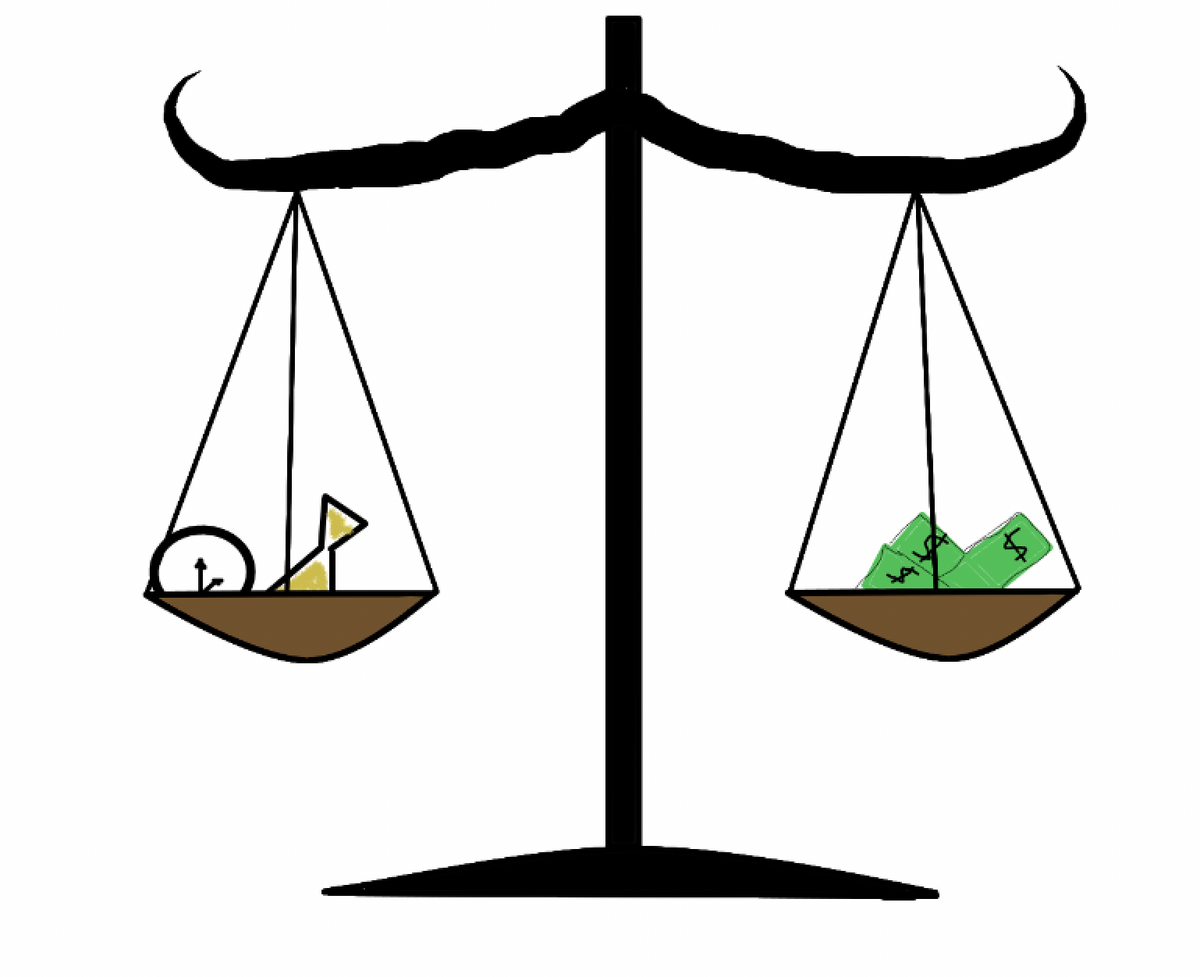