What is the optimal amount of wealth?

Hello friends, and welcome to Young Money! If you want to join 3750 other readers learning about finances and career navigation, subscribe below: 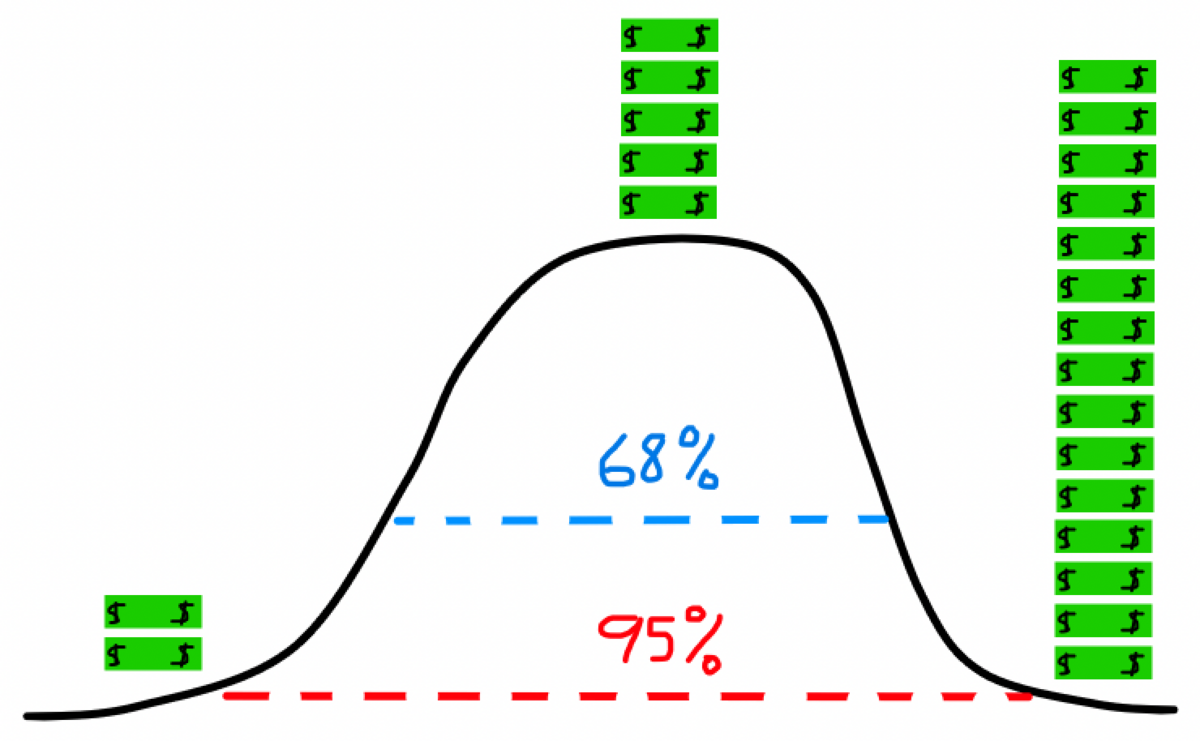 In a 2018 Esquire interview, essayist and statistician Nassim Taleb gave the following description for the optimal amount of wealth:

Money can’t buy happiness, but the absence of money can cause unhappiness. Money buys freedom: intellectual freedom, freedom to choose who you vote for, to choose what you want to do professionally. But having what I call “f*ck you” money requires a huge amount of discipline. The minute you go a penny over, then you lose your freedom again. If money is the cause of your worry, then you have to restructure your life.

This runs counter to the generally accepted idea of "f*ck you" money.

"F*ck you" money, in our heads, is a singular point. Once we cross it, life's problems melt away. When you have X amount of money, you can say "no" to things that you don't want to do. Nobody owns you. Your life is wholly yours. You have the ultimate degree of freedom.

This is what we think "F*ck you" money looks like: 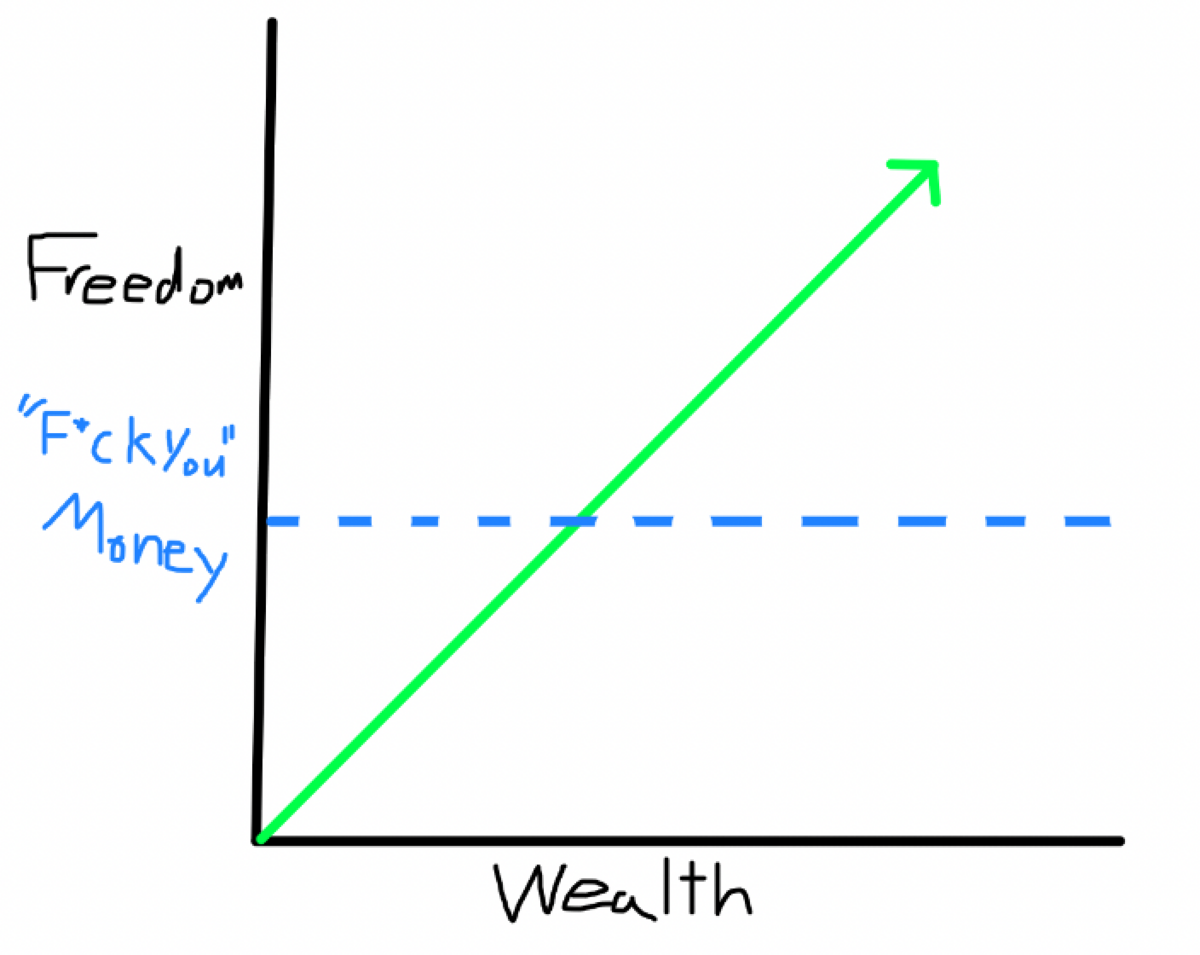 But reality isn't filled with straight lines that we can extrapolate forever. Reality is messy, full of nuance. The reality of "f*ck you" money isn't a singular point to cross, but a range to stay between. A dollar too much, and you descend back below that threshold. The formula is reversed, and additional wealth comes at the expense of additional freedom. Sure, you might be "rich" financially, but you don't have "f*ck you" money. 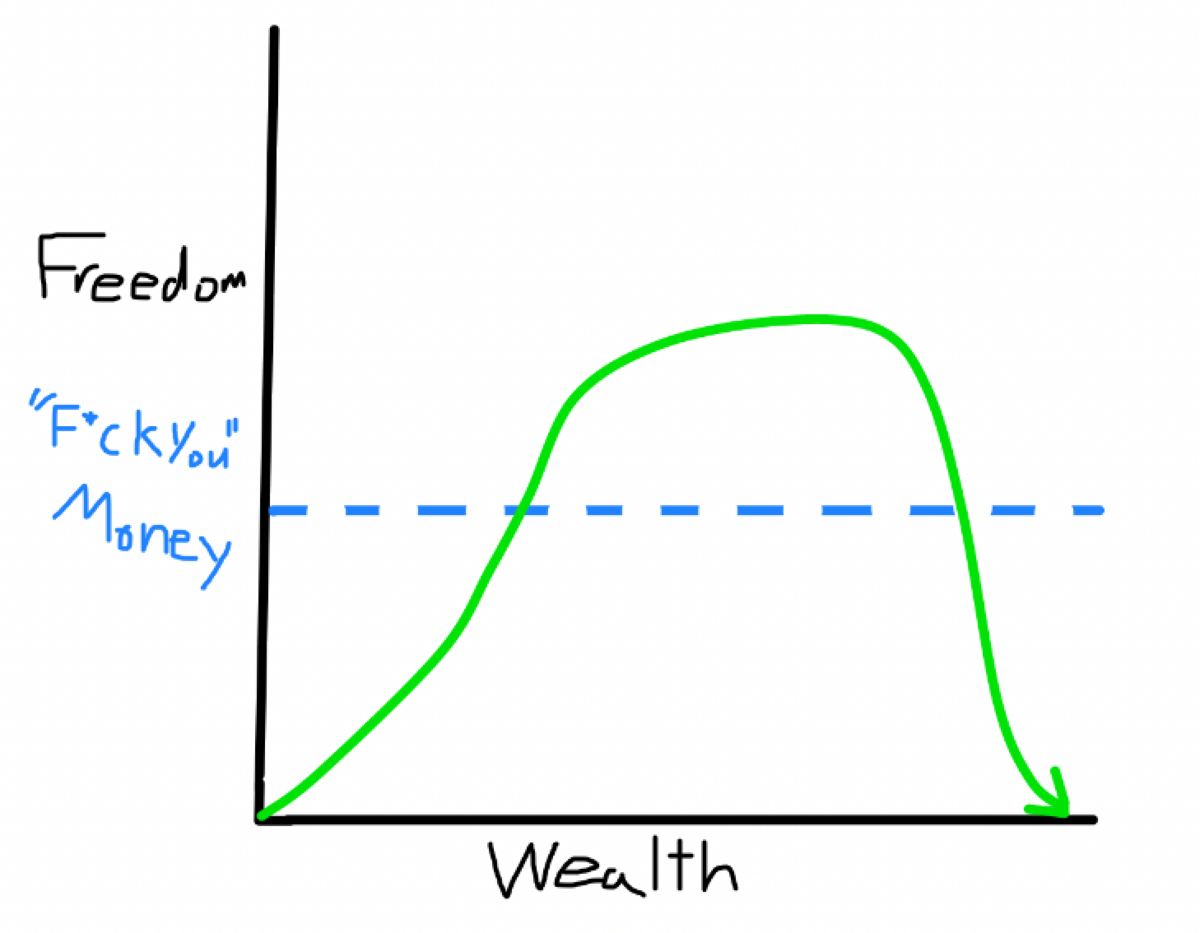 Let's dive into both sides of the graph.

In one of my first articles, Time Isn't Money, I discussed the diminishing marginal utility of money. A graph of wealth vs. happiness looks something like this: 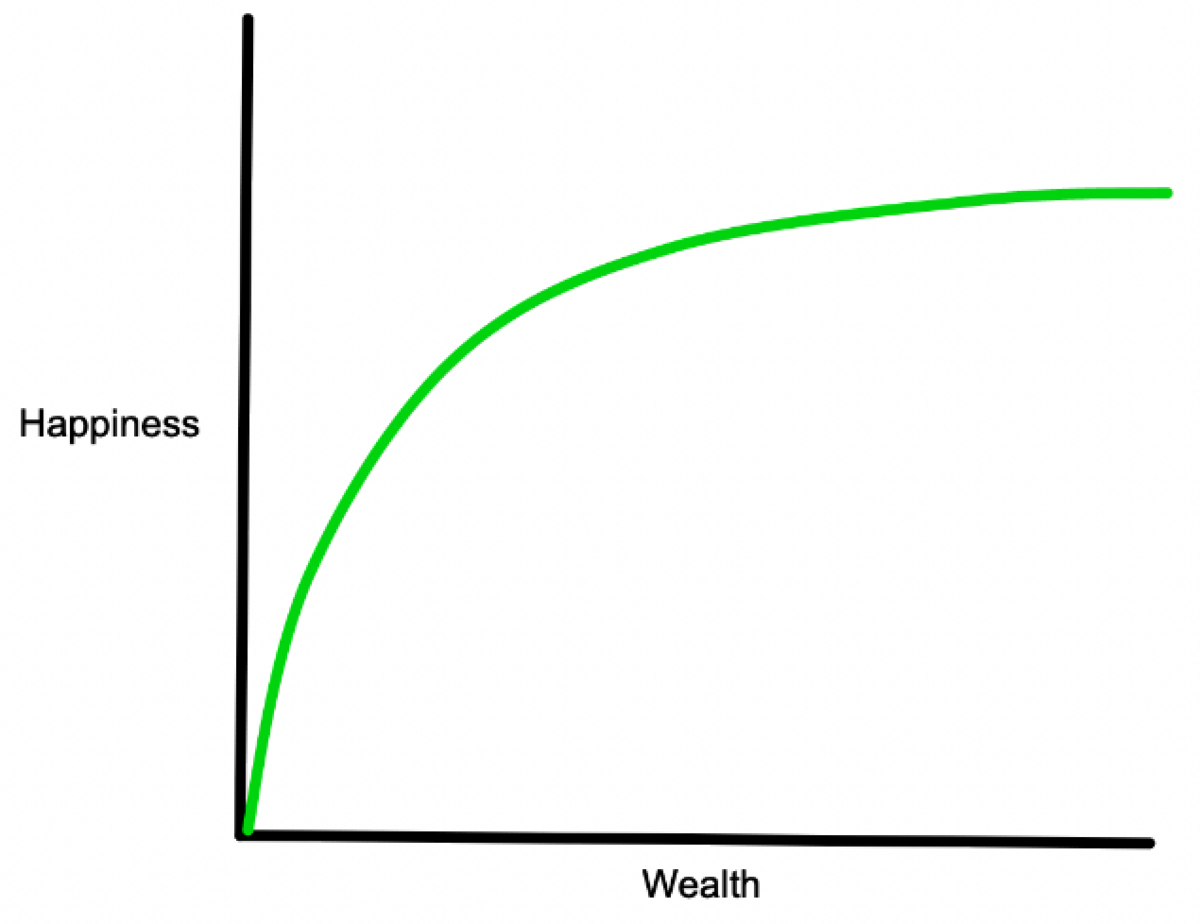 A room in a 3BR apartment in a decent part of town is going to cost you ~$1k, effectively deleting half of your income. You can probably survive on the other $13k annually if you cook at home, never take any trips, and avoid going out on weekends.

Until something bad happens.

What if your car breaks down? You have an unforeseen medical emergency? A family member gets sick?

You never made enough money to save extra income, so you're out of luck (and probably in debt).

Poverty leaves you perpetually skating on thin ice, living from paycheck to paycheck. The ice keeps heating up the longer you skate, and it's only a matter of time before you fall in.

Poverty keeps individuals trapped in dead-end jobs because they can't afford to leave and look for something new. Poverty turns medical emergencies into financial catastrophes.

Poverty puts your destiny in the hand of circumstances that you often have no control over, because poverty doesn't allow you any financial flexibility.

However, as your income grows, outside circumstances lose their grip on your life. If you have $50,000 saved up, you can weather seven months of unemployment, afford to repair your truck's transmission, and cover emergency medical expenses.

If you have $50,000 saved up, you can quit your job and take a leap of faith to try something new.

But what happens if you swing the pendulum too far to the other direction?

Being (Too) Rich Can Also Suck

Would you switch places with Elon Musk? $229B net worth. Known for creating the world's first reusable rocket ships, taking electric vehicles from pipe dream to reality, and posting dank memes on Twitter. You could live anywhere you wanted. Date anyone you wanted. The world would know your name, and you would go down in history as one of the greatest minds of the 21st century.

If you said yes, I want you to really think about it for a minute. Read these quotes from a 2018 New York Times article about Tesla's CEO:

In an hourlong interview with The New York Times, he choked up multiple times, noting that he nearly missed his brother’s wedding this summer and spent his birthday holed up in Tesla’s offices as the company raced to meet elusive production targets on a crucial new model. Asked if the exhaustion was taking a toll on his physical health, Mr. Musk answered: “It’s not been great, actually. I’ve had friends come by who are really concerned.”

He said he had been working up to 120 hours a week recently — echoing the reason he cited in a recent public apology to an analyst whom he had berated. In the interview, Mr. Musk said he had not taken more than a week off since 2001, when he was bedridden with malaria. “There were times when I didn’t leave the factory for three or four days — days when I didn’t go outside,” he said. “This has really come at the expense of seeing my kids. And seeing friends.”

Mr. Musk stopped talking, seemingly overcome by emotion. He turned 47 on June 28, and he said he spent the full 24 hours of his birthday at work. “All night — no friends, nothing,” he said, struggling to get the words out. Two days later, he was scheduled to be the best man at the wedding of his brother, Kimbal, in Catalonia. Mr. Musk said he flew directly there from the factory, arriving just two hours before the ceremony. Immediately afterward, he got back on the plane and returned straight to Tesla headquarters, where work on the mass-market Model 3 has been all consuming.
Mr. Musk paused again.

“I thought the worst of it was over — I thought it was,” he said. “The worst is over from a Tesla operational standpoint.” He continued: “But from a personal pain standpoint, the worst is yet to come.”

And Musk isn't an exception. I would say for the ultra rich, he is the norm.

Alice Schroeder's book, The Snowball: Warren Buffett and the Business of Life, gave us a sobering look at the home life of the world's most famous investor.

Once the kids were grown and gone, Susie decided to move out and left for San Francisco. She and Warren lived apart for 27 years, and while they still talked extensively by phone, he was crushed by what he considered the biggest mistake of his life. "He wandered aimlessly around the house, barely able to feed and clothe himself."

In May 2021, the world's 10 richest men had 13 total divorces, with Mark Zuckerberg and Larry Page being the only two still married to their original spouses.

Did you know that world's 10 richest men have had 13 total divorces. 🤦🏻

Did billions of dollars make Elon Musk miserable? Did Warren Buffett, Bill Gates, and Jeff Bezos suffer failed marriages because of their $100B net worths? Not necessarily. However, the traits that made them so successful both financially and professionally have also made the other aspects of their lives a living hell.

No one is superman, and we are all limited by time and energy. If you invest maximum effort into your career, your personal life has no choice but to suffer. 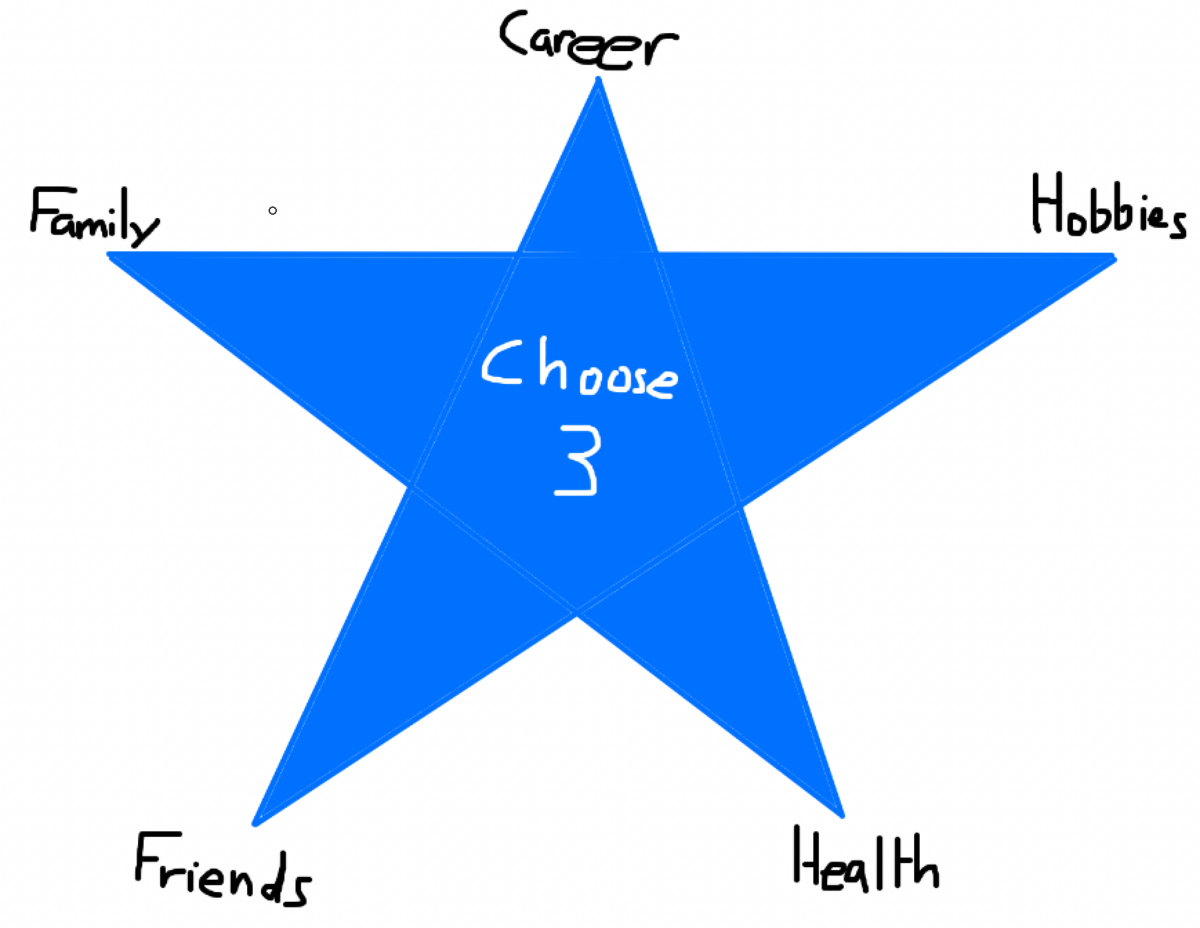 The life matrix of the world's "most successful" individuals looks something like this. 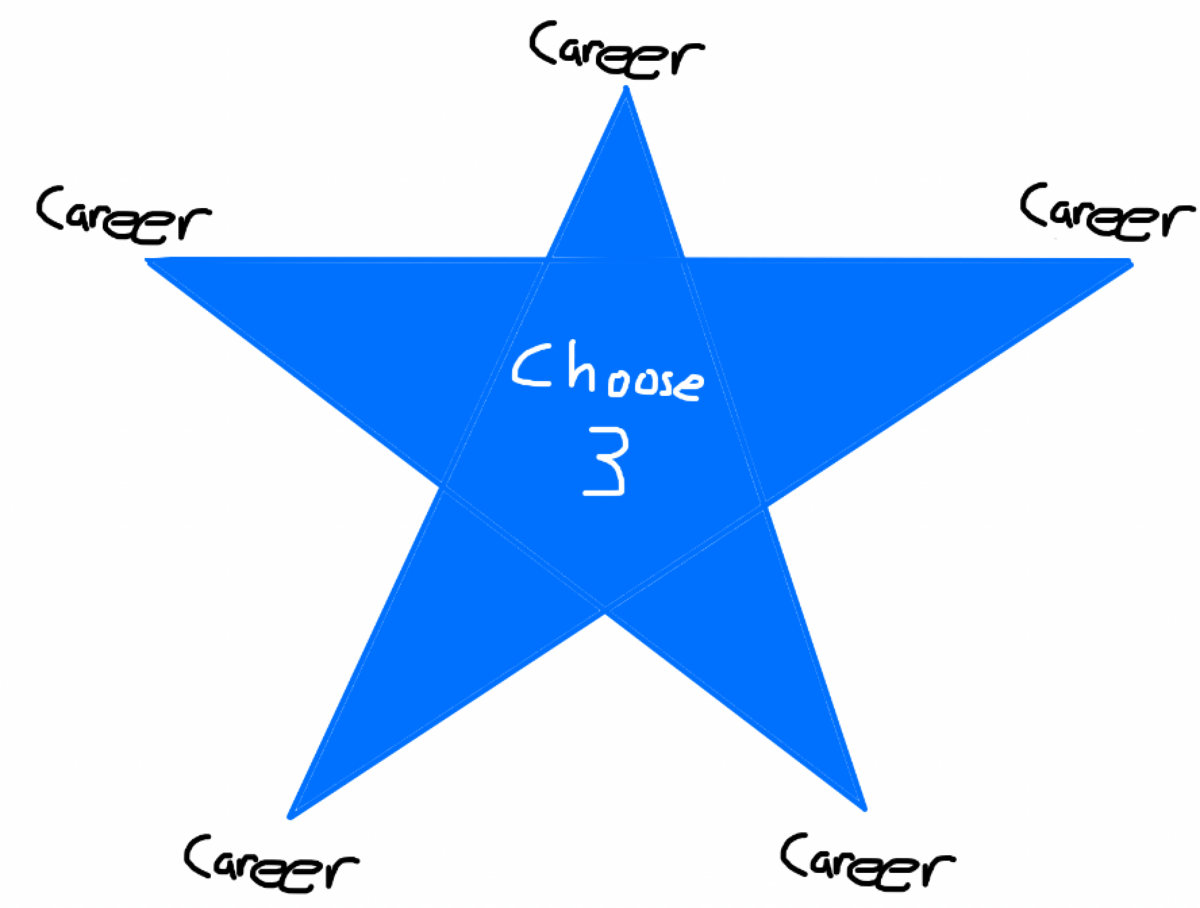 Life is defined by opportunity costs. The opportunity cost of reaching the pinnacle of professional success is often a lackluster family life. It's not necessarily that money destroys relationships, but the dedicated effort needed to achieve this success comes at the expense of other (often family) aspects of one's life.

A singular drive to succeed professionally often yields a life where one's only success is in their profession.

No one can have it all.

But it's not just the opportunity costs associated with success that plague the ultra rich, it's the magnification of every aspect of their lives.

If I were to call Taiwan a country... actually I'll just do it.

"Taiwan is a country!"

There is a zero percent chance I would be pressured to apologize for it. Nothing would happen. Frankly, no one would care what I thought.

Yet when actor John Cena accidentally said, “Taiwan is the first country to watch Fast and Furious 9," he was forced by China to issue the cringiest apology video in history. 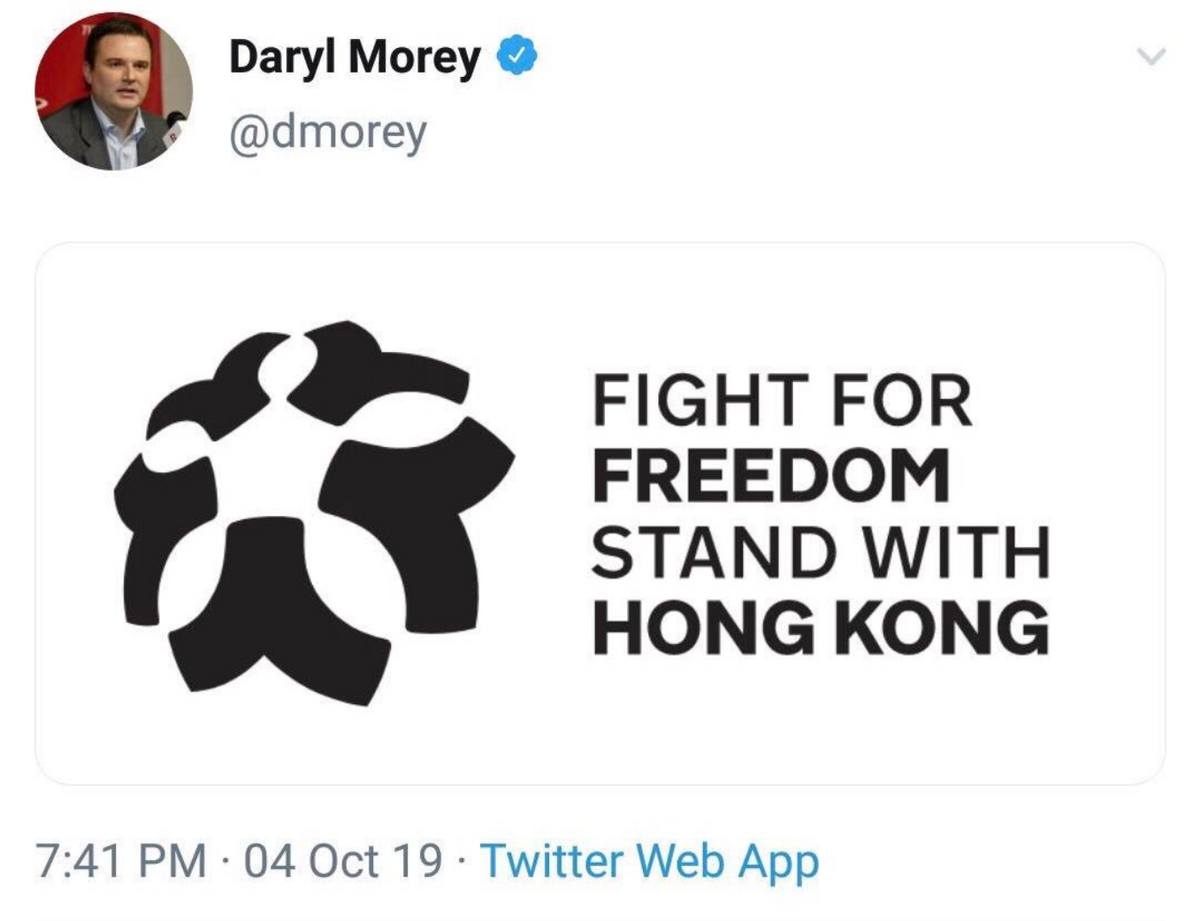 China threatened to pull much of its NBA coverage from its broadcasts, including all Houston Rockets games. Like Cena, Morey later issued an apology of his own. Past a certain point, freedom of speech is a casualty of personal success.

Money affects the dynamics of one's interpersonal relationships as well. When you are rich, new "friends" that seem genuine pitch you investment ideas four months into the "friendship". Your dating life is compromised by bad actors that are more concerned with your wallet than your personality. Family members come out of the wood work asking for financial help.

Your private life quickly becomes a public life as your wealth and fame balloon. Rabid fans blow up your email inbox and try to find your personal address. Your daily routines become front page media stories.

But don't take it from me, listen to Tim Ferriss.

11 Reasons Not to Become Famous (or “A Few Lessons Learned Since 2007”)
I felt like I somehow needed fame. In retrospect, there was a lot of self-loathing from tough childhood experiences, and I desperately hoped that love from without (i.e., from m...
tim.blog

Now you may be thinking, "Okay Jack. But the money itself isn't causing the problems. It's just associated with them."

And maybe you're right, hypothetical person that I created for the purpose of conjuring this question, but that doesn't mean the issues that I highlighted aren't exponentially more likely once your wealth passes a certain threshold.

If you are "publicly rich" (think athletes, authors, movie stars, politicians, etc.), you no longer have a private life. Everyone wants a piece of the public figure, for better or worse.

If you are "privately rich", you still run the risk of sacrificing other areas of your life for the sake of success. You could have all the money in the world and be a prisoner to your ambitions. What good is $100B if all of your relationships are in shambles. Money can't buy true friendship, camaraderie, love, or desire.

The ultra-rich, like the impoverished, find that their decision making processes are largely dictated by circumstances outside of their control.

What Does F*ck You Money Mean to Me?

In February 2021, my liquid net worth hit a peak of $410,000. This was largely the result of a successful 10 month run day trading the stock market. Ironically, I was further from having "f*ck you" money here than I was a year earlier.

Because I was a slave to my money. I couldn't escape the markets. I felt compelled to trade, to make that number go higher and higher, every single day. I said I would slow down at a million, but I know I wouldn't have. Because after one million, I would have wanted two. Then five. Then ten.

I didn't have "f*ck you" money. I had money that was saying "f*ck you, I own you" to me every single day.

"F*ck you" money is pure, unadulterated freedom with no strings attached.

The billionaire hedge fund manager trying to outperform last year's returns doesn't have "f*ck you" money. Neither does the minimum wage worker struggling to survive.

While these individuals reside on opposite ends of the income spectrum, their minds are consumed by thoughts of needing more.

The guy with "f*ck you" money? He doesn't think much about money at all.

Happy Tuesday, let's get this paper.