In a world drowning in dopamine, focus is a powerful competitive advantage.

Hello friends, and welcome to Young Money! If you want to join 2990 other readers learning about finances and career navigation, subscribe below: 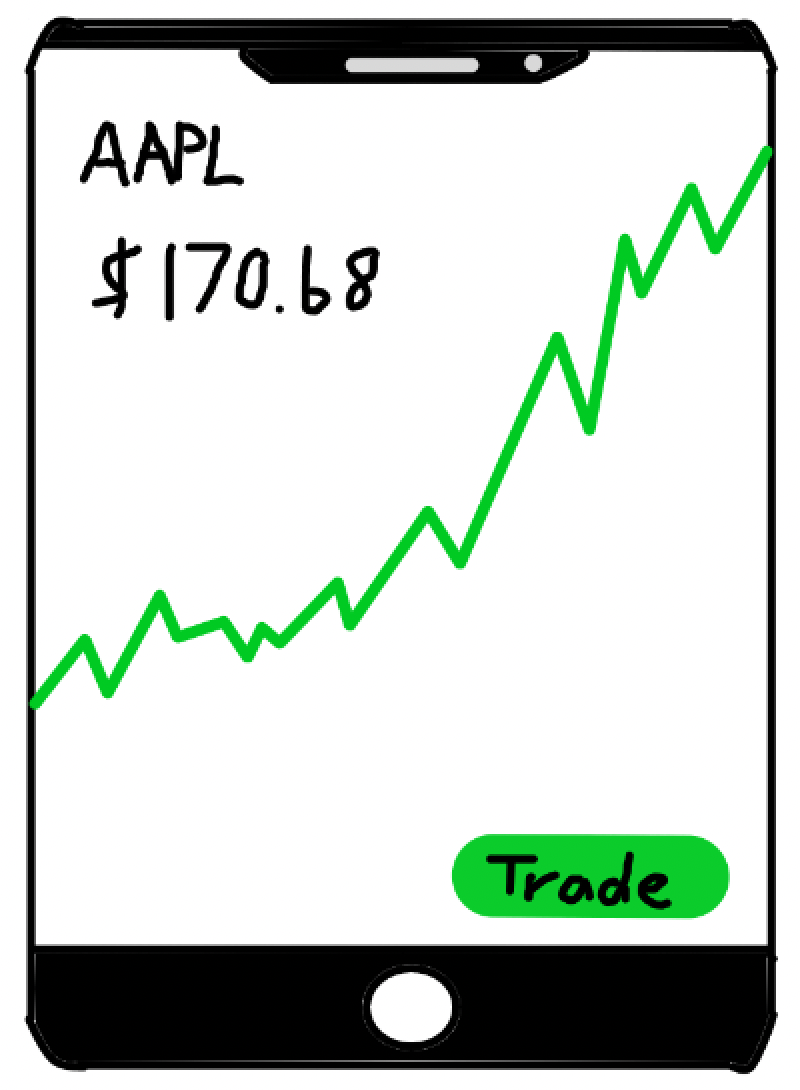 "Comparison is the thief of joy." - Theodore Roosevelt

Social media is the ultimate comparison platform. We highlight our adventures on Instagram. We brag about our careers on Linkedin. We flex on our high school classmates on Facebook.

And it's toxic as hell. Those consuming content subconsciously compare the entirety of their own lives to the top 1% of moments displayed in posts. Those creating content are constanly chasing the rush of another like, another retweet, another share.

At its core, social media encourages engagement over authenticity, and everyone loses in this trade off.

The perils of social media are no secret; Netflix has an entire documentary about how social networking is ruining our lives. 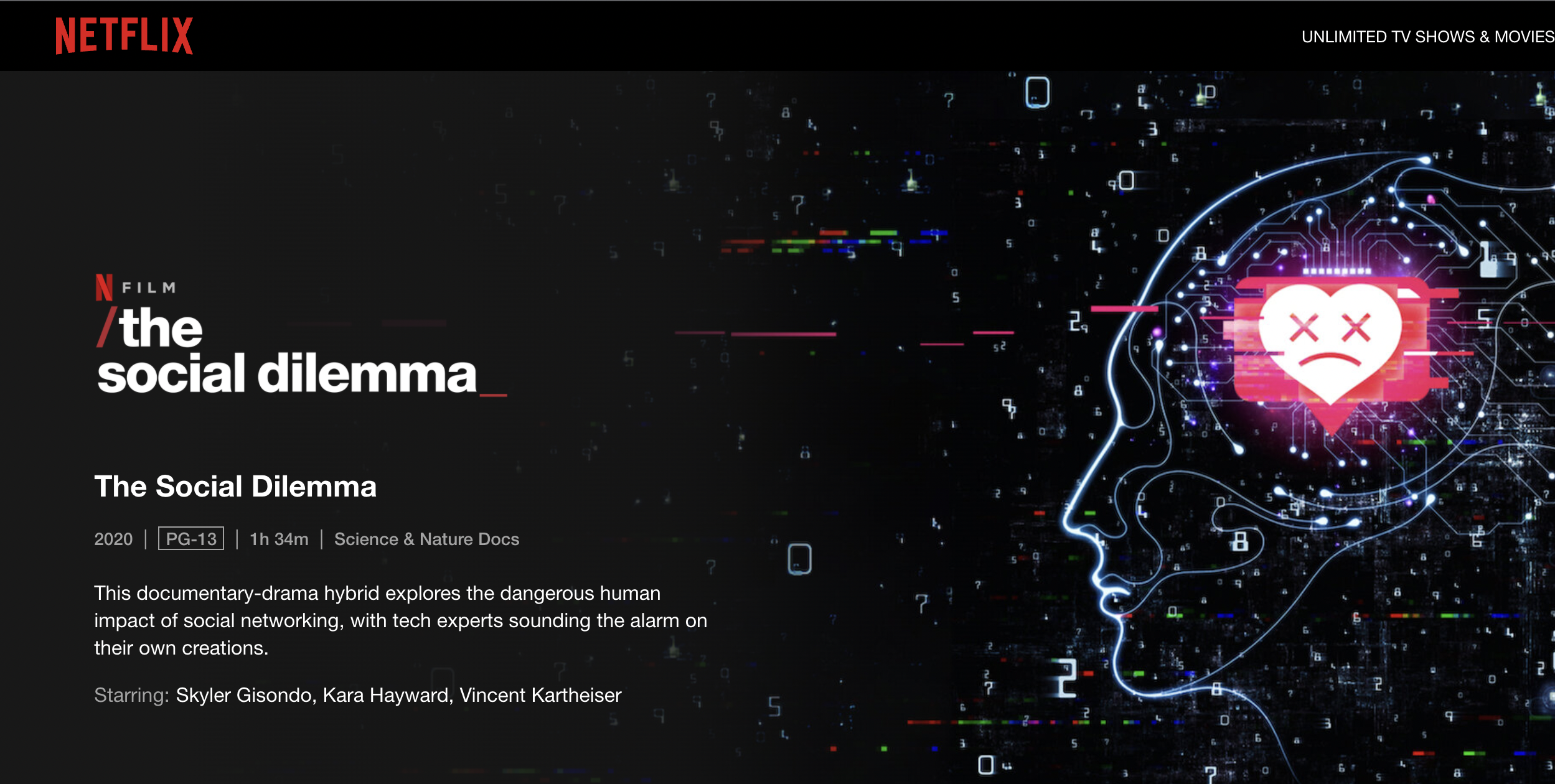 What is the driving force behind this online dystopia?

Dopamine is a naturally-occurring “feel-good” chemical that triggers our inner rewards system. It is released when we eat delicious food, have sex, and take addictive drugs. Social media mimics human connection, prompting dopamine release when we get likes and comments.

Much like pulling the lever on a slot machine for an unknown outcome, we throw content on social media for unknown engagement. The thought of the engagement that we could get draws us in. And each like, each share, each comment is its own mini-jackpot. We have grown to crave that sensation.

Edward O. Wilson once said, "The real problem of humanity is the following: We have Paleolithic emotions, medieval institutions and godlike technology."

Big Tech engineers are incredibly adept at activating those nomadic chemical responses in our brains. As a result, it is nearly impossible to tear our eyes away from their platforms.

Last week, I grabbed coffee with one of my favorite entrepreneurs, Jack Butcher.

Butcher's career has been fascinating. After spending a decade in the ad industry as a creative director, Butcher struck out on his own. What started as a "jack of all trades" (pun very-much intended) solo marketing company eventually focused on a single niche: pitch decks. Jack realized he could create a lot of value by helping clients tell their stories.

Visual storytelling is a rare skill, and Butcher turned it into a business. He created Visualize Value to help clients do just that.

Jack set up a Twitter account for his brand, and he used his graphics as a funnel for business opportunities. The Visualize Value account exploded in popularity. If you are active on Twitter, you have likely seen some of his work:

Failure is the frame, not the picture.

(Jack's story is awesome. Check these interviews with Chris Williamson and Paulina Pompliano for more about Visualize Value).

The combination of simple images and complex lessons appealed to a wide audience, and Jack's black-and-white images are now everywhere on Twitter. However, Visualize Value wasn't the only digital art to explode in popularity over the last two years. NFTs did as well.

As a builder in the visual art space, Butcher decided to dip his toes in the NFT market. He managed to unlock another revenue stream by selling his art, so he dug deeper. And then he found himself speculating more and more.

Jack was one of the best builders in digital art, and even he got caught up in the hype. The trading game. The dopamine.

How could he not? he was witnessing billions of dollars being thrown around in digital assets, and he operated in the middle of the space. Eventually, he snapped out of it and got back to what he does best: build.

Ironically, Jack tweeted about our dopamine epidemic 365 days ago:

The dopamine epidemic has infected finance, and the effects aren't pretty.

I saw it in the world of SPACs.

SPAC sponsors receive millions of shares for free if they successfully take a private company public, so they have every incentive to make it happen. Private companies receive millions in funding if they go public through a SPAC, so they have every incentive to over-exaggerate their financial projections. The result? Dozens of half-baked companies with mediocre stories go public at insane valuations.

Jack Butcher has seen it in crypto.

Builders previously interested in solving hard problems are now selling stories to investors to make a quick buck. Roadmaps for "projects" that will never come to fruition are raising millions of dollars.

We have all seen it in our own friend groups.

Everyone is a trader in 2022, and everyone thinks they can make bank. Your buddy with $8k in his Robinhood account checks his portfolio 25x per day, but he won't take the time to work on any new skills. The opportunity cost of dopamine is the meaningful progress not made as a result.

Everyone is a trader. No one is a builder.

Everyone is a reader. No one is a writer.

Everyone is a consumer. No one is a creator.

As I have mentioned several times now, I was actively trading stocks pretty much every day from January 2020 to August 2021. Every single day, while I was supposed to be "working" my real job, I was looking at TD Ameritrade nonstop.

A 10% move in a stock could represent a $20,000 gain or loss for me. And I couldn't stop checking the prices. Green moves were euphoric. Red moves were miserable. But the idea that the next move could be green kept me coming back to the casino. Luckily for me, most of my moves were green.

While sitting on my friend's couch in Pittsburgh last August, I lost $120,000 in five minutes on one bad trade. Think about that: Two years of income vaporized because I was chasing dopamine.

There were these lies that I was telling myself:

"You're good at this game, so it's not gambling."

The truth was I had a crippling dopamine addiction, and the stock market was a generous drug dealer. Until it wasn't. Luckily, losing 2x your salary in five minutes is one hell of a detox.

The voice in my head screamed "What the hell are you doing dude? I literally made $400k at 23 years old by smashing buttons on my phone, and I was still playing with fire. My entire life revolved around making some lines on my phone screen go up.

I needed to make some changes, so I turned off the dopamine faucet. I placed my last two trades that morning: I sold my remaining stocks, and I invested all of my money in an S&P 500 ETF.

A month earlier, I had begun posting on this blog called "Young Money." You may have heard of it. I decided to double down on throwing words on the internet.

No longer trading stocks all day, I filled my newfound free time by writing. And let me tell you, it was a sharp reversal on the dopamine scale. After announcing that I was starting a finance blog, I sent my first article to 234 people on July 8th, 2021.

Two months in, the process felt pointless. I contemplated dropping this project. After all, I was used to 10x returns in a week. Why was my newsletter taking a month to double in subscribers? Seriously, this graph sucks.

But I kept writing. And somewhere around early November, something changed. A piece that I wrote got picked up by some bigger accounts, and my subscriber numbers jumped significantly.

And this wasn't a one-off bump in subscribers. The increased growth rate continued. I gained more readers in a single day in December than I had in the entirety of August. 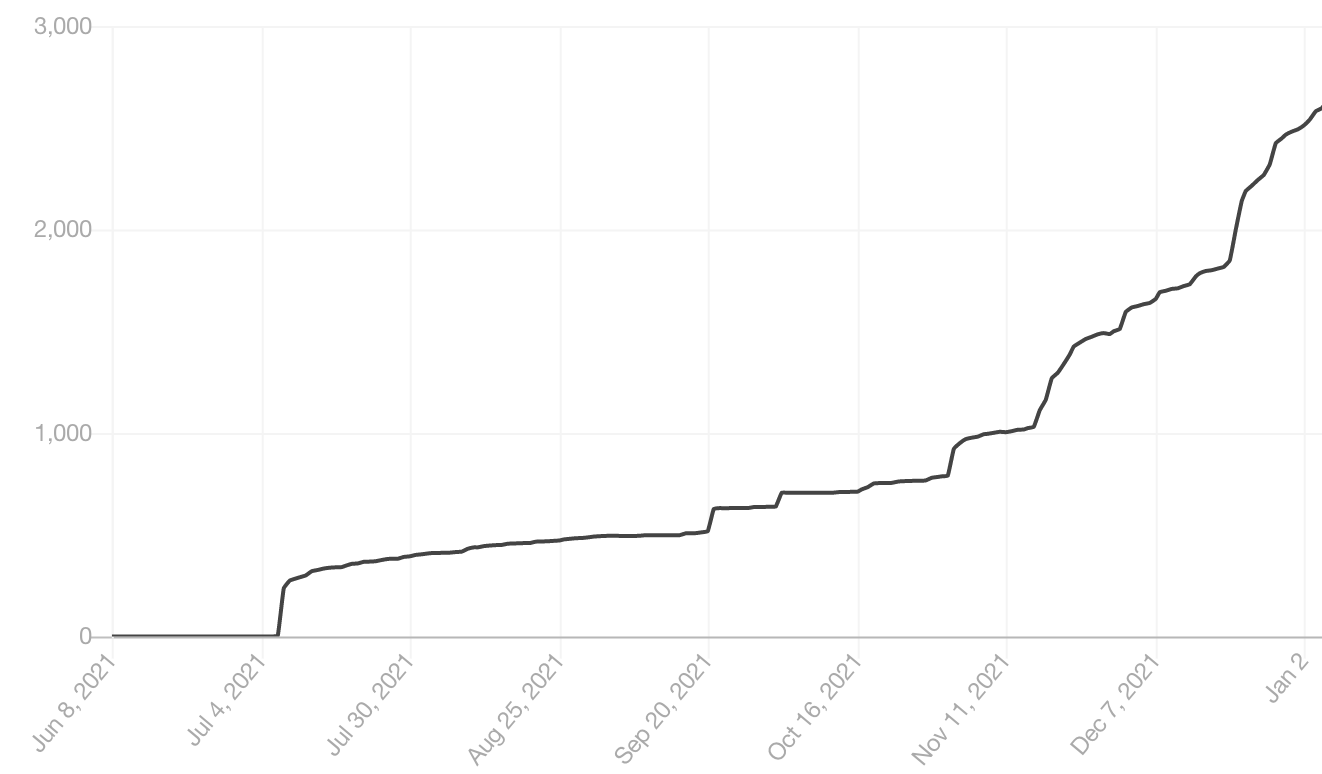 Progress takes longer than you think, but then it happens faster than you could ever imagine.

Trading is a negative-sum game, in the short-term anyway. For you to buy, someone else has to sell. For you to sell, someone else has to buy. For you to make money, you have to buy and sell at better prices than the average market participant. When you incorporate commissions, slippage, gas fees or whatever hidden costs are involved in your system, you are now dealing with a negative-sum game. Which means you have to be really freaking good to make consistent money.

But the math shows that over half of the players will end up losing money.

I was one of the lucky ones. I made a lot of money, and retained a decent amount. While I learned some hard lessons on money, biases, and dopamine, I was paid to attend class. How many potential builders, creators, and operators are so obsessed with chasing returns in a negative sum game, that they never try to build anything of lasting value? Never create something to call their own? And never make money along the way.

Because the reality is, most participants in these games won't make money. And they will invest a lot of their time into something that doesn't make them any money. Not a great trade; they never get back the opportunities wasted chasing dopamine.

The pursuit of cheap dopamine interrupts the boring progress needed to build anything great.

I had to write two articles every week for four months before I saw any sort of substantial results. Spending four hours on a piece, just to hear crickets after you hit publish, is disheartening. Now do it again, and again, and again.

But that's how success is built. A million small failures that become lessons that compound into incredible results. But you don't have a chance at reaching those results if you're chasing dopamine. Because you'll ditch your process to get a quick fix somewhere else.

Once you think, "This is boring", you will find something that isn't boring. You will never stick around long enough to build.

Jeff Bezos has famously said, “Your margin is my opportunity,” implying that Amazon delivered better prices by removing the costs added by the middlemen in the retail supply chain.

I say, "Your attention span is my opportunity." We have more tools than ever before to empower creators and builders. But we also have more distractions than ever to knock us off track.

In a world drowning in dopamine, focus is a powerful competitive advantage.

Go build something cool this week.