The issue with quitting your job on a whim.

Hello friends, and welcome to Young Money! If you want to join 3530 other readers learning about finances and career navigation, subscribe below:

(Apologies for the delay, it's been a hectic week. Going forward, I will be back on my routine of sending out a piece every Monday and Thursday morning) 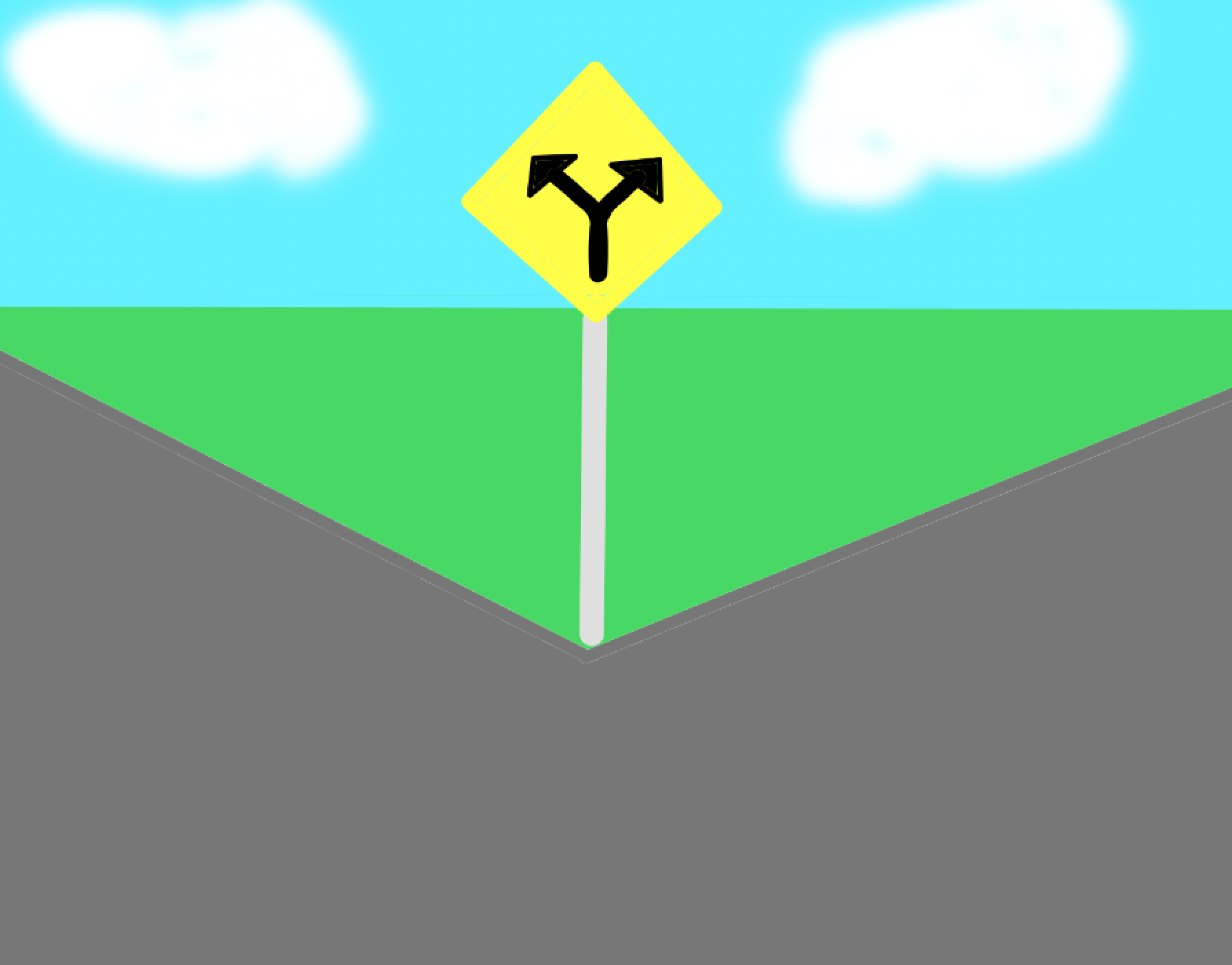 In 1518, the governor of Cuba, Diego Velázquez de Cuéllar, commissioned Hernán Cortés to secure the interior of Mexico for colonization. However, a sense of jealously developed between the two conquistadors in the time leading up to the voyage. Velázquez feared that Cortés would rebel against him, so he subsequently revoked the other Spaniard's charter before he could set sail.

In an open act of mutiny, Cortés gathered 600 men and set off for the Yucatan Peninsula anyway. The small Spanish army landed in Mexico in February 1519. Ahead of them was a 200 mile journey through uncharted land to the capital of the Aztec empire: Tenochtitlan.

Cortés's army, outnumbered in a foreign land, faced a daunting task. But Cortés couldn't turn back. If he returned to Cuba, he would be imprisoned or executed for mutiny. However, he realized that many of his men might flee for Cuba to avoid death and defeat in Mexico. Already outnumbered, Cortés couldn't afford to lose any soldiers.

Once his men disembarked the ships, the conquistador gave a single order:

(In reality Cortés had his ships "scuttled", or intentionally sunk. Same outcome, less dramatic story though).

With their escape route destroyed, the Spaniards had only one choice: conquer or die. They began the long trek to the heart of the Aztec Empire. City by city, they marched onward.

They came. They saw. They conquered.

Two years later, Cortés had claimed all of the Aztec Empire for Spain, and he was appointed governor of Mexico. 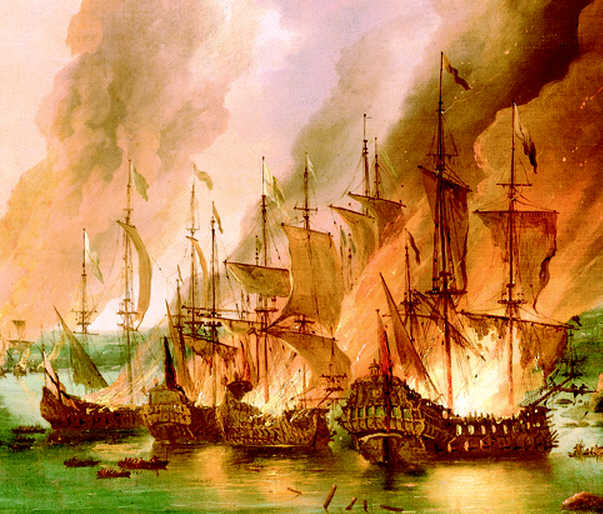 The tale of Cortés burning his ships has been used by motivational speakers and football coaches to inspire their audiences and players to go "all in".

This story does present an exhilarating message: There is no Plan B. Success is the only option.

Burn the ships may inspire you to give relentless effort on the football field. Or work up the courage to ask out that girl. Or take a risk that you have long been avoiding.

Maybe you want to make a career change. You're sick of the 9-5, and you want to start your own business. Or freelance. Or say "Screw the corporate grind, I'm going to go live my life."

So you want to burn the ships in your professional life and set off on your own journey.

We romanticize the idea of burning our corporate ships, especially in the internet age where we see our peers doing this everyday. We all know someone who started their own business, or got off the grid, or turned a side-hustle into a full-time income stream.

Buck the trend! Pursue your passion! Never "work" another day in your life!

It sounds great, but it probably won't work.

I hate to tell you, but burning the ships in your career is a horrible idea (at first, anyway).

"But Jack, you did burn the ships in your professional life!"

Well, no. Not right away at least. Though it appears that way if you have followed me for a while. From the outside, this is what the last six months of my life have looked like:

I am well aware that it looks like I'm "living the dream".  And it looks simple. Almost too easy. What you don't know is everything that happened in the background leading up to last August.

What seems like a spur-of-the-moment, Carpe Diem shift in my life is actually the byproduct of luck, timing, coincidence, and unique circumstances. Let me break it down:

If any of these variables had been different, I would most likely be working my corporate finance job in Atlanta right now.

I had no debt or serious financial responsibilities. I made more money than I should have by trading SPACs in a euphoric market. I started writing a finance blog around the time that I messaged a meme page about his Spotify playlists. I pitched the idea of writing for him as he was considering expanding his content.

I wish I was making the Spotify part up: 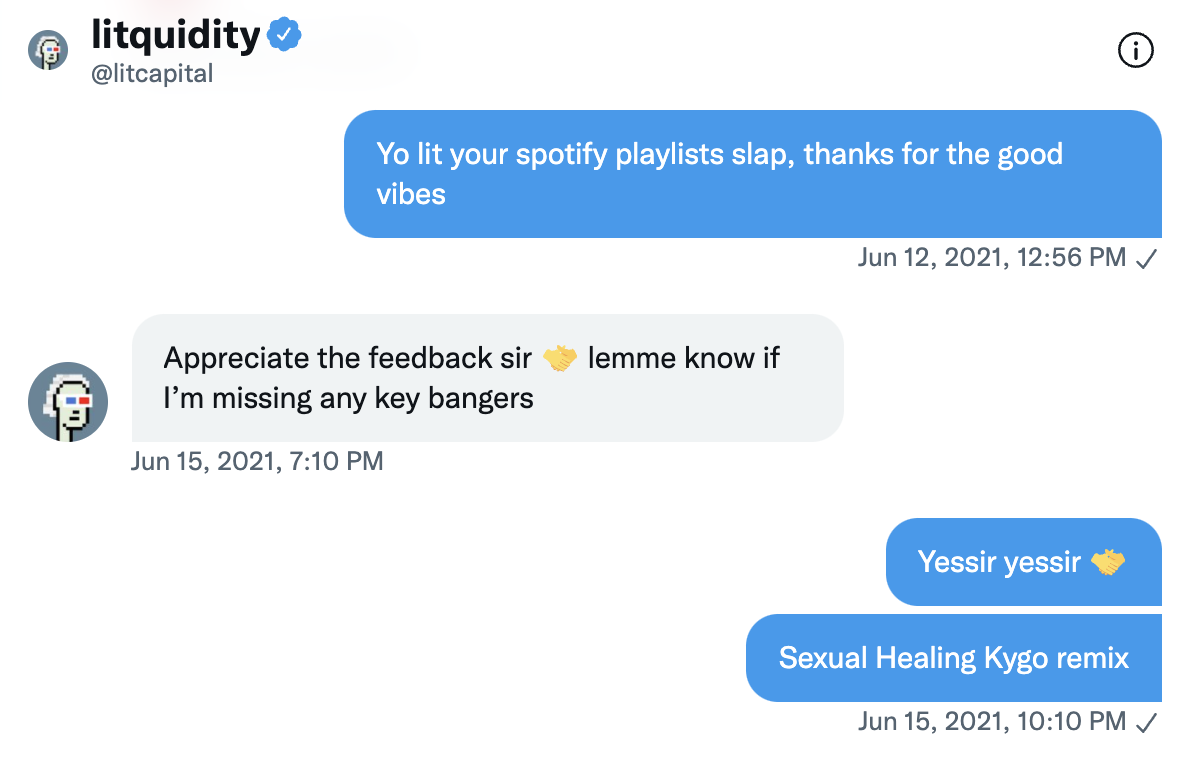 I am currently employed because I told a meme page to add the Sexual Healing Kygo remix to his Spotify playlist (it does slap though).

So yeah, I quit my job in August to travel around Europe and write stuff. But there was no career or financial risk for me to do so, and I saw a lucrative career path in writing online.

Why did I make the jump in August?

Because I had reached an inflection point.

When referring to business, Investopedia defines an inflection point as the point at which a significant change occurs. Here are some inflection points from well-known companies:

Apple's iPhone, Netflix's streaming service, PayPal's transfer network, and Uber's mobility platform weren't accidents. They weren't the aftereffect of a spontaneous idea to "burn the ships". They were the result of meticulous planning, exceptional execution, and luck.

For individuals, inflection points represent moments when the timing is right to make career changes, take risks, or burn the ships.

Inflection points won't be the same for everyone. Age, finances, responsibilities, and flexibility will determine where one's inflection point is. However, four variables must be accounted for before you reach an inflection point.

If you don't have a financial safety net to support you for ~six months, you can't afford to quit your day job. Maybe this is savings, maybe it is alternative income streams. But quitting to "chase your dreams" without the money to pay your bills is a recipe for disaster. For me, I had enough money saved up to remain liquid for the next year+.

Demand for Your Work

If there is no demand for what you are building, selling, or doing, you'll never make a dime for it. If you are creating content (blogging, videos, newsletter, podcast), there has to be an audience for your stuff. If you are starting a company, you need to address a market need. "Build it and they will come" is a lie. See what they want, and build it.

While this seems obvious, there has to be evidence that you can actually make money from what you're doing. I write a blog, among other things. But well before I quit my job, I studied the economics of newsletters and online content. Email newsletters, on average, generate 36:1 returns for advertiser dollars. This means that companies pay top dollar to advertise on newsletters with big followings. I have met writers who make $1M+ per year from ad revenue. That's nuts. Additionally, writing online expands your network. I now get paid to cross-post my old stuff on other newsletters. I have been contracted to copy write various projects. The opportunities are endless. That being said, you need to know how you can monetize your work before quitting your day job.

The Dunning-Kruger Effect states that people with limited knowledge or competence in a given domain greatly overestimate their own competence in that domain. More bluntly, we think we're good at things that we actually suck at. You could be financially stable, the market could have massive demand for your product, it could be a lucrative business model, but if you aren't a tactician, none of that matters. The only way to figure out if you are good is to put yourself out there; the market is never wrong.

The best way to hit those four points is to start building your new venture while you still have your regular job. I started writing online months before quitting my old job at UPS. As I fine-tuned my craft, I began committing more of my time to my new project. The transition looked something like this:

There was a several month period of overlapping commitments before I phased out of my old job and went all-in on the new one. This isn't unique to me; anyone who has build a unique career path took similar steps.

Litquidity started a meme page a few years ago, but its popularity took off during the pandemic. He was initially working full-time in private equity while running his social media accounts, but he went all-in on the meme page once sponsorship revenue neared his salary. "Litquidity" is now a newsletter, podcast, venture capital scout, and apparel business. 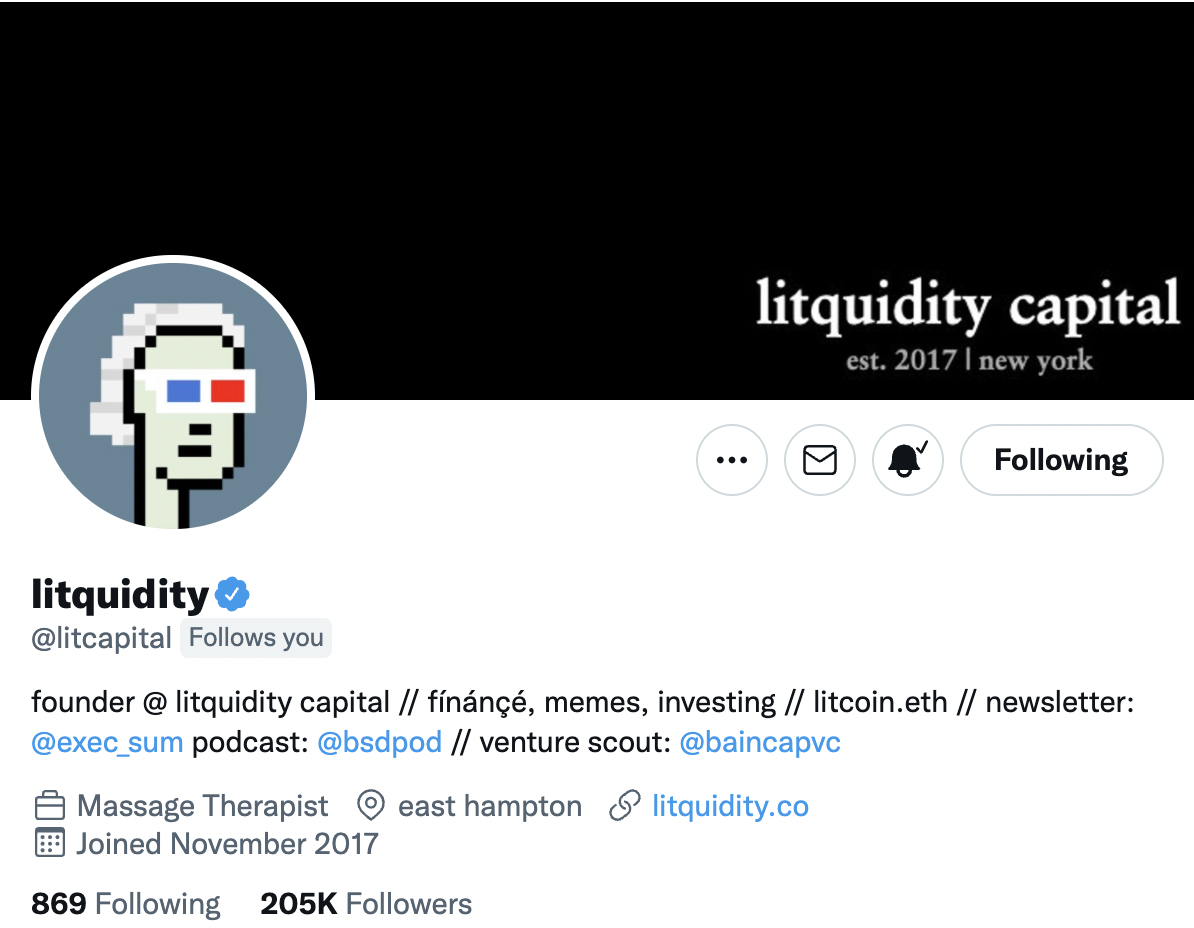 Jack Butcher used his Visualize Value Twitter and Instagram accounts as an inbound marketing system for agency jobs. Eventually the popularity of his accounts grew so big that Visualize Value became a lucrative business of its own. Butcher zeroed-in on teaching others how to build profitable brands. Visualize Value is now a multi-million dollar brand and business. 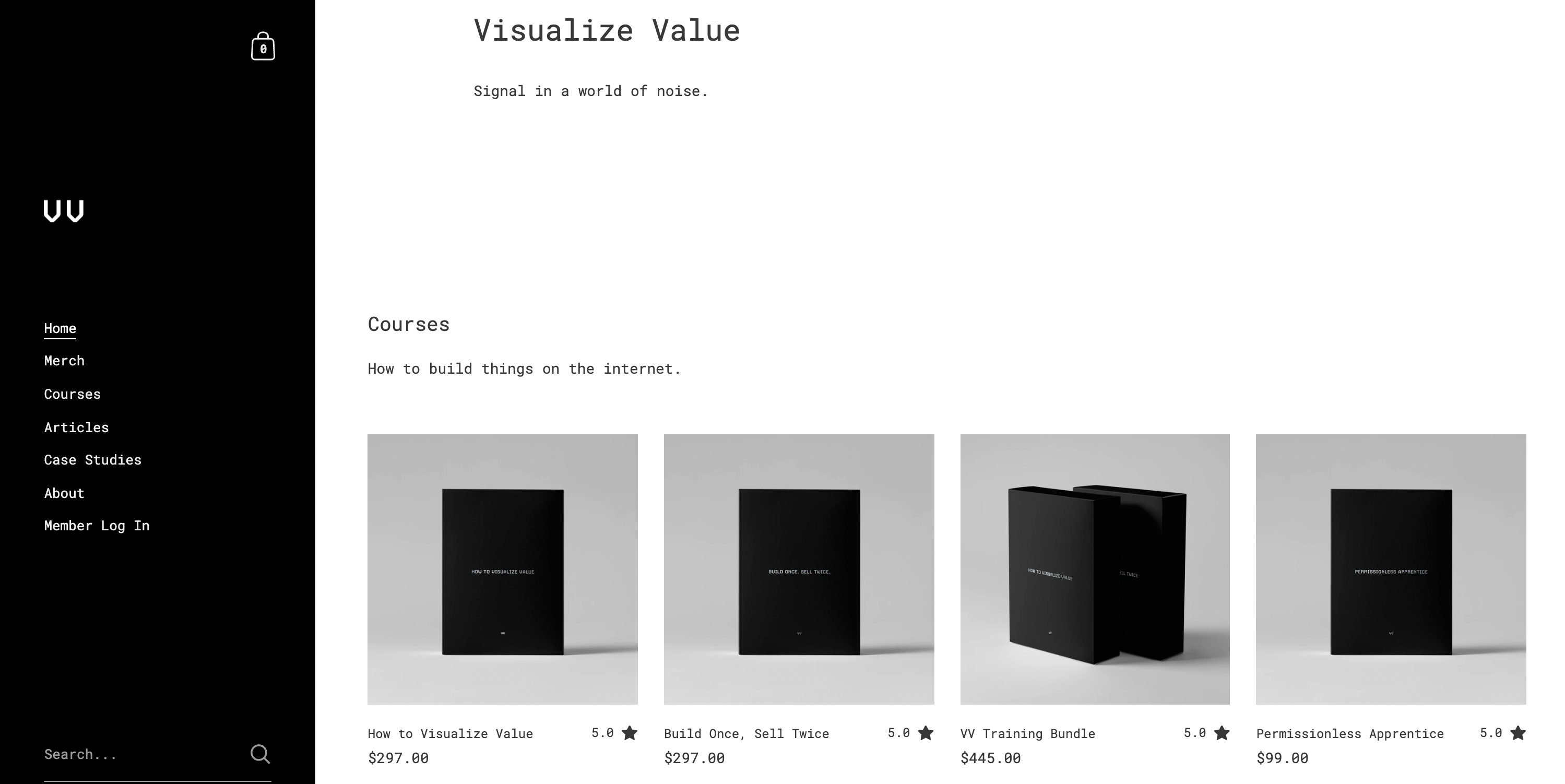 Alex Lieberman and Austin Rief started Morning Brew while they were students at the University of Michigan. After graduation, Lieberman balanced this project with a full-time job at Morgan Stanley, while Rief continued working on the newsletter as he finished his coursework. After two years, they had enough subscribers to monetize their newsletter with sponsorships. The duo went all-in. Morning Brew now has millions of subscribers, and Insider Inc. bought a majority stake for $75M.

Luck and unknown variables often play an outsized role in success, but you can control the risk that you take in your new ventures. By keeping your old job while building your business, you minimize your risks.

This ensures that you never lose your income stream if your startup fails. You aren't time-crunched to generate revenue if progress is slower than expected. Plus, you still don't lose out on any upside if your new venture is successful.

Being slow to quit your old job increases your likelihood of reaching an inflection point with your new venture.

"Burn the ships" sounds good in theory, but going all-in on a new venture without adequate preparation is a massive risk. If you want to pursue something new, start building it before you quit. Ensure that you have a product the market is willing to pay for. If you can check all of those boxes, then go for it.

You don't have to burn the ships to start a new career. You can start building new ships instead, and retire the old vessel once the new ones is proven seaworthy.