Hello friends, and welcome to Young Money! If you want to join 3050 other readers learning about finances and career navigation, subscribe below:

Last July, I decided to start writing a blog. I mentioned it on Instagram, Facebook, and Twitter, and 200 of you signed up to check it out. Six months and 3000+ readers later, here we are. It's been a pretty wild ride so far.

Six months ago, I had no idea where I was going to take this thing. Honestly, I started writing Young Money because I was frustrated that no one would hire me to write for them. 12 applications, 4 interviews, no dice. As it turns out, that was a blessing in disguise.

I love writing this newsletter, and if someone had hired me, I never would have started my own thing.

I love interacting with you all. Hearing from a guy in Stockholm who wants to hang next time I'm in Europe. Someone else from the Canary Islands that wants to translate my newsletter to Spanish. A radio host in St. Louis who invited me on his show. A quarterback who juked me out of my shoes in college (lowlight of my career) that came across my stuff on Twitter. And hundreds of others, friends and strangers alike, who have reached out in support of this thing.

The world is a massive place, but the internet has certainly made it smaller. In August I was just backpacking through Europe like a degenerate and writing some words on the web. (Though the traveling hasn't stopped. In fact, I just landed in Argentina. You can read about that below).

Backpackin'
Backpacking around the world, from England to Argentina. Come follow along 👇🏼
www.backpackin.blog

Thanks to you guys, all of those words on the internet turned into some incredible opportunities, and I now make a living writing words on the web. Quite the career pivot from corporate finance lol.

But the best part of this thing? Answering "What do you do for a living?" with "I write a blog." Definitely generates mixed responses.

As this thing has grown, I have received questions about getting started writing online and/or breaking away from a traditional career. The truth is, there's no productivity hack that will expedite your results. Every single person who has tried to build anything, myself included, has experienced a graph like this: 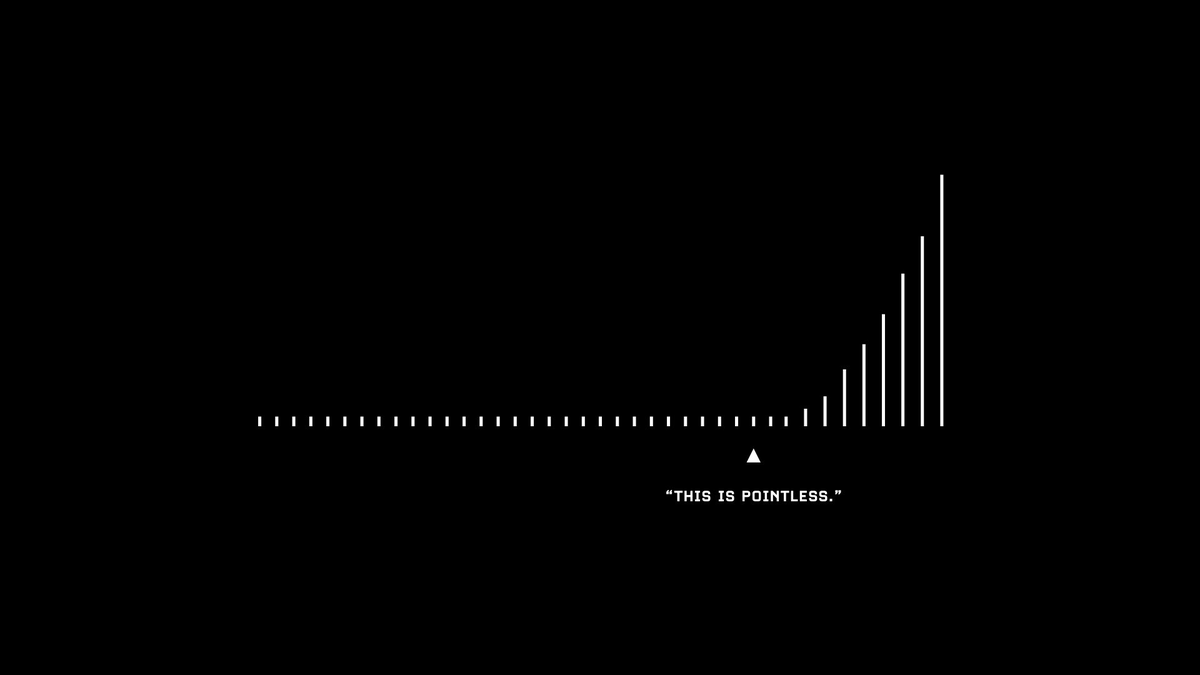 This probably wasn't what I was supposed to be doing at this point in my life. It definitely isn't what I thought I would be doing four years ago. But I promise you it's more fun.

To anyone else that wants to take a risk but doesn't know if they're ready: you're correct. You aren't ready. But I wasn't ready either. Hell, I'm still not ready. Nobody is ever "ready". But those that take action anyway, despite their unreadiness, reap the rewards.

So go screw up again and again. Because I'm going to keep screwing up too. And it's going to be awesome.

Oh, I want to try something new as well. If any of you have ideas, stories, or thoughts about anything finance/investing/career related that you find interesting, let me know. If you have some cool stuff, I want to write about it. So send your brain blasts my way.